When visiting the West of Ireland, consider making time to explore County Leitrim.  This lesser-known gem is the homeland of my ancestors, and I first traveled there in 2008.  In addition to the beautiful countryside, lakes, and waterfalls, County Leitrim is home to Parke's Castle.  My ancestors, the the Lords of Bréifne, built this castle in the 1500s. When I arrived, I joked that I was moving back in and asked for the keys.  The tour guide rolled his eyes slightly, and upon signing the guest registry, I understood why: The pages were full of Roarks, Rourkes, and O'Rourkes!  I wonder how many of them had made the same joke.

The last O'Rourke to own the castle was Brian na Múrtha Ó Ruairc.  It was here that he sheltered and entertained Francisco de Cuellar, the shipwrecked Armada officer.  In later years, de Cuellar was to write of his host: "Although this chief is a savage, he is a good Christian and an enemy of the heretics and is always at war with them.”  He also mentioned that the king's wife was incredibly beautiful, and that all the O'Rourke men were of "large, strong bodies and all quite handsome." Turns out it's genetic. :-)

This episode was dramatized recently in The Last Torch, a musical produced by one of my distant relatives (Wild Geese member, Fran O'Neill.)  Fran used some of the photos I took of the castle to create set pieces for the play. 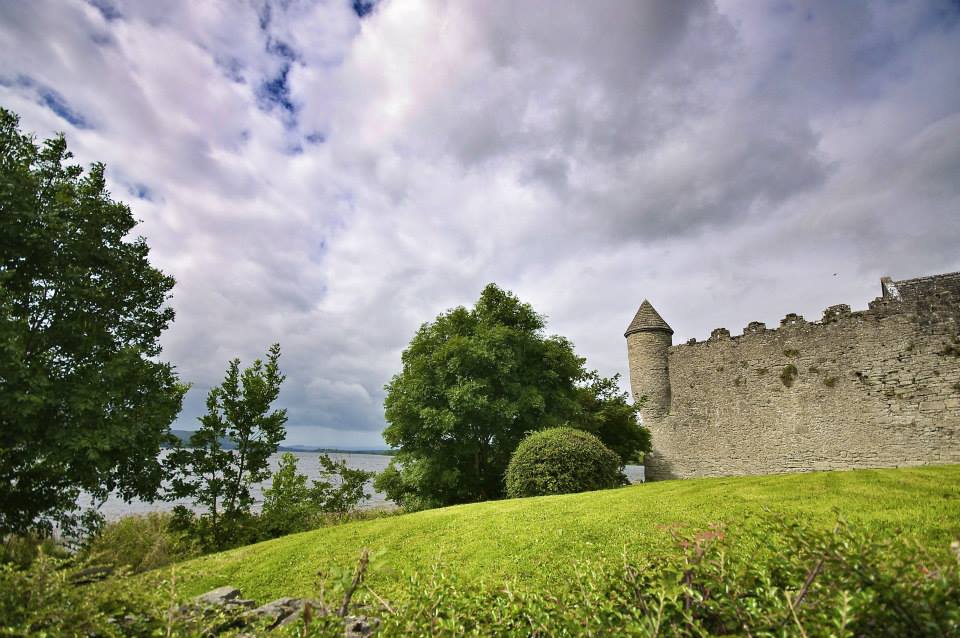 In 1591, Brian O'Rourke (Brian na Múrtha Ó Ruairc) was hanged in London for treason against Britain.  He was among the last of the Irish kings to be subdued by the occupying British.  O'Rourke's castle on lovely Lough Gill then fell into the hands of the English crown.  Queen Elizabeth gave the castle to an Englishman named Robert Parke.  Parke changed much of the castle, transforming it into an English-style Manor House, but the original outer walls and towers remain.  The Office of Public Works restored the site in the 1970s and 80s. Visitors today can see Parke's home, and the base of the old O'Rourke tower house, which was uncovered during excavations in 1972. After touring the castle, you can also take a boat ride around Lough Gill, and view the famous "Isle of Inisfree."  The island is tiny, unimpressive, and uninhabitable. Sorry to burst your bubble if you are a fan of Yeats or the movie "The Quiet Man," which both paint a very different picture!  The lake itself, on the other hand, is enchanting.  Enjoy!