The Sing Sing of the IRA 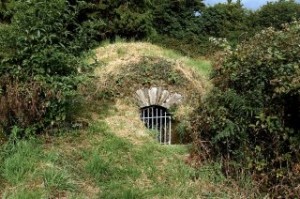 During Ireland’s War of Independence from 1919 to 1921, the people supported the patriot cause and the new, if not British approved, Irish parliament – Dáil Eireann and its administration. Part of that administration was a system of Courts to hear and adjudicate legal issues. The people’s support of the court system was as strong as their support for Dáil Eireann. The Republican or Dáil Courts were one of the signal achievements of the War of Independence. Taken from the days of the Land War in the 1880s, the long-standing tactic of agrarian activists had been to set up their own courts which dispensed truer justice and fairer rents than those imposed by the British system which they simply ignored. In the years 1920 and 1921, that tactic was revived. Many Sinn Fein branches had set up courts to settle disputes in their local areas. In May 1920, the Dáil formally adopted the Courts and they were initially put under the Department of Agriculture to resolve land disputes. However, by June, the Dáil transferred the authority over the Courts to the Minister for Home Affairs, Austin Stack. The Dáil Courts were now criminal as well as civil courts, with the right to administer the law in place of the British courts. This was yet another direct challenge to the legitimacy of British rule in Ireland.

Formally established by Dáil Eireann on 29 June 1920 across much of the country, the British system of justice was now to be ignored as the people took their claims to the Dáil courts. Each parliamentary constituency had its own Court with five judges chosen by parish justices who were, in turn, elected by a convention of the Sinn Fein Club, the Trades Council, members of a rural or urban authority, the Volunteers and Cumman na mBan. The justices were representatives of the local people and answerable to them in a way British Magistrates never were. lt was an honor to be elected and the judges took their duties seriously. In some areas, the establishment of Dáil Courts took place during a campaign in which the IRA burned existing government courthouses. By mid-1920, the remaining British Courts were finding they had no cases to deal with. Notwithstanding the success of the Dáil Courts, there remained the difficult problem of enforcing its verdicts, which, if the judgment was not accepted, had to be done by force.

The Republic had no prisons, so more creative methods of punishment had to be found. In one case a gang that had stolen £15,000 was deported from the country after returning the money. In one land dispute, tenants ordered to leave refused and were forcibly taken out to an island on Lough Corrib and left there until they agreed to accept the ruling. In some cases, petty criminals were sentenced to work for farmers in other areas, while still others were made to pay compensation to their victims. Those convicted of serious crimes were exiled, as there was nowhere secure to hold them.

However, there was one notable exception when it came to members of the British Forces, spies and informers rounded up by the IRA. A secure holding of these prisoners awaiting trial became a considerable problem. Enter Ned Moloney, a blacksmith in Knockraha, County Cork, who knew of a vault in the area which might prove useful for pre-trial prisoner detention. It was an underground vault in the old Kilquane Cemetery measuring 16ft x 8ft by 6ft high. The entry, which was gained by descending 6 steps, was covered by years of broken tombstones, debris, and overgrown with bushes and was virtually invisible from the surrounding area. The vault was guarded by a solid 6-inch thick steel door and gate. When closed, the vault was totally dark and virtually air-tight. Moloney drilled holes in the steel door to provide ventilation and the vault was cleaned out.

It is thought that the vault was originally constructed some 1500 years earlier as a food storage place by local monks and was reinforced for use again in the 17th century to keep bodies before burial to protect them from grave-robbers who sold them for medical use.
In mid-1921, 100 years ago, it became the official prison of Cork Brigade No. 1 and was colloquially referred to as Sing Sing, after the New York prison. The community posed as pro-British to avoid the scrutiny of enemy patrols as the area not only held the prison but two IRA bomb factories as well. Criminals detained there for trial were blindfolded when brought there to safeguard their location.

If acquitted, they were blindfolded again and taken for a walk among the Cork hills and released without ever knowing the location of the vault in which they had been held. Others were similarly released after agreeing to their penance. More serious offenders like Black & Tans, Auxiliaries, spies, and informers were also held there before their trials. When sentencing had been decided, they were either blindfolded and taken by a circuitous route through the hills and released or executed and buried in a nearby bog for their crimes.

British forces never discovered the location of Cork’s secret prison. Ned Maloney, the caretaker of Sing Sing declared it the most powerful jail in Ireland. Martin Corry, Moloney’s superior officer, and later a long-serving Fianna Fáil TD, who had put Moloney in charge of the prison, made no mention of the executions but praised Moloney as having had the name and disposition of every man ever held in Cork’s Sing-Sing. Moloney had looked after 150 prisoners over the period and not one escaped his custody. It is believed that 24 members of the military and 11 other spies and informers were ultimately taken from Sing Sing and executed. The rest were freed with a warning or a penance. An undated note on Dáil letterhead records some 27 enemy spies and intelligence officers captured and duly executed by E company of the 1st Cork brigade at Knockraha, referring to them as members of a shadowy ‘Anti-Sinn Féin League’ or ‘murder gang’ of renegade Auxiliaries. Stories about the incarcerations may never be known as all the patriots are long gone, but they are remembered.

The Sing-Sing of the IRA today

On Sunday, 27 August 2013, the Knockraha History Society finally revealed the location of the hidden vault. They had refurbished it, put guard rails beside the steps, and opened the long-forgotten Sing-Sing prison in the cleaned-up Kilquane cemetery to the general public with an exhibition of memorabilia from the War of Independence. The Sing-Sing of the IRA is now a tourist attraction due to its importance during the War of Independence as the prison of the Cork First Brigade with 150 prisoners being held there during the War and 35 who deserved it, being executed out of it. It is a unique facility with nothing similar anywhere in Ireland. It has received massive exposure from historians in various publications and it was recently the subject of a major documentary on TV3. Check out Sing Sing Prison County Cork Ireland - YouTube and see Ireland’s Sing-Sing prison for yourself. It's only as fascinating as the terminology.  For example: was Washington a terrorist or a patriot defending his people?  Was our nation founded on murder because he killed so many of the enemy (the same enemy as Ireland had)?  Was what our military did to the native Americans considered advancing civilization or holocaust  like the Brits did to the Irish by exporting their country's crops during the Great Hunger of 1845-52 causing millions to starve to death or be forced into deportation from their own country.  You can't call something wrong, unless you know all the truths!

I will support memorializing the Brits who died IN Ireland killing Irishmen when America puts up memorials to Hitler's, Mussolini's and Hideki Tojo's followers.  They too believed in what they were doing, no one follows orders they don't support.  Check your history!