'Oiche na Gaoithe Moire' - The night of the big wind! That phrase usually refers to one of the most devastating hurricanes that ever hit Ireland, which made land during the night of Little Christmas, on the 6th of January 1839, almost 174 years ago, just before the outbreak of the potato blight that precipated the Great Famine. That unexpected hurricane left many thousands of families, both rich and poor, but mostly poor, homeless. Every second house in ireland suffered damage that night. Entire thatch roofs were whipped off cottages and deposited miles away by the terrifying winds. Whole forests were knocked and hundreds lost their lives, on land and at sea, but especially on the west coast.

Last night's storm in Ireland was not quite as bad as the hurricane of 1839, but nonetheless it was a very dangerous and destructive storm. This morning over 75,000 houses are without electrical power and many houses are damaged, not the least my own. The storm pushed the already high Atlantic tides in over coastal defences and flooded many seaside towns and cities. River levels are at crisis levels in many areas with flooding likely in the coming days. Many traditional Wren Boys or Mummers parades were disrupted and few musicians braved the country roads last night when the storm was at its fiercest.

'Ní hé lá na gaoithe lá na scolb' - The day of the wind is not the day for fixing the thatch - An old Irish proverb.(A 'scolb' is the bent willow twig that,much like a hair-clip, is pushed through each stook of straw or reed thatch, thus affixing the each layer of thatch onto the roof. Scolb, think early roof nails). The song 'My roof's got a hole in it and I might drown' by The Brothers Four, comes to mind. 'There was a crooked man...etc. Fun song, should get more air play, not just in my head. 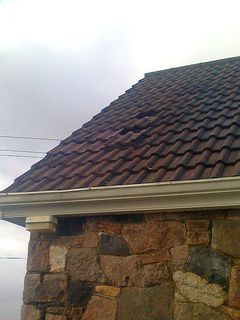 During last night's storm that lasted over 18 hours, with heavy rain and winds that often gusted to 120 mph, my whole house shook, and the roof rattled alarmingly while the Banshee breeze whipped round the house, from every direction it seemed. What a clatter the roof-tiles made, all night. The entire roof was alive, as every tile whipped up and fluttered every few minutes, much like a deck of cards in the wind, making a sound like the waves receding on a rocky beach, clack-clack-clack as they fell back into place after each howling squall, until inevitably, two of the tiles in one row didn't re-sit and were wrenched out of the roof including their retaining nails at about 1am. Luckily they were held up on the roof by the eaves-chute and didn't break on the ground.

This morning the wind is still gusting 50 mph out there,and lashing horizontal rain, so not a lot I can do about the improvised ventilation my house was treated to last night. Another song, oft sung late at night, is rattling round my head, like a crisp bag circling a wind-swept school-yard. 'Up The ladder I must go' ... 'Sam Hall'. Ah, gallows humour ... nothing like it.

We lived through it, Brian!  We'll be telling our grandchildren about it. :-)

Stay off that roof until the wind drops to below 50 mph, at least ... which (at this rate) should be some time in April.

In Ireland in the west the direction of the wind blowing at New Year would indicate the trend of politics in the coming year. If it blew from the west it would flourish, if from the east the English would have upper hand. According to this site http://www.fathertimes.net/irishnewyear.htm

Just glad everyone is ok! Love the tune Belinda and oh so appropriate today for our Ireland dwelling friends! ;)

Friends and Family on Ireland's West Coast have been on my mind since I first heard teh early warnings yesterday.

Reports such as yours are starting to come in via FB and email, as everyone checks in

As Fran said, glad that everyone is okay... Houses and such can be fixed...people cannot be replaced

Glad to say, just down off the roof before dark...wind and rain held off for an hour while running repairs were effected. Three tiles replaced, a few more tightened back into place, all is well with thge roof once more, for another while-een. One does learn a degree of self-sufficiency out here...and there's a mighty degree of satisfaction too!

I remember seeing plenty of thatched roofs during my visit to Ireland, like the one at Moran's Oyster Bar south of Galway.  How would they have fared in this storm?  Do most of the ones you see have another roof under the thatching?

Glad to hear everyone survived the storm last night unscathed. Living on the coast in Cape Cod, Massachusetts I can totally understand how dangerous and frightening these storms can be.I hope no one had much damage and that you and your families are all safe and warm.

Thanks everyone...yes there was damage done but surprisingly little for the strength and ferocity of the wind. Perhaps it says a lot about the traditions behind house building in Ireland. Older houses were single storey, low to the ground and the thatch roof, was expertly set, affixed to stout beams cut from local trees, the gables were not set far apart and the whole roof, when fully thatched was weighed down by traversing ropes, with heavy stones at each end as ballast, or in more modern thatched houses, such as Morans, the restraining ropes were tied off to 'Cloch-a-stucai', or stones off-set high into the walls, under the roof, which acted as anchors for the thatch. Yes, location aside, the builders of yore were smart and very aware of the power of nature and the frailty of our man-made structures. Unlik my house, built at the top of a hill, with the view in mind only! Yet I only suffered minor damage really. Thank God.

I was only two weeks in London when Hurricane Charley hit and I slept through it. I was so use to the West of Ireland's winds I guess it sounded like a light breeze blowing outside. Although when I moved back over ten years ago I thought a light breeze sounded like a hurricane. Last night was bad though but we survived and our house is intact.

Most houses are tiled or slated nowadays but the few thatched houses that remain have a zinc metal sheet under the hay.