John P. Joyce is a name that would not be familiar to most people around the world, and even in his native Ireland.  Born in County Galway in 1839, Joyce was a pioneer in the development of professional baseball in the United States, and specifically in Ohio.  Along with Harry Wright, Joyce established the country’s first full professional outfit in Cincinnati with Joyce serving as the club's tireless Secretary.

The original Cincinnati Red Stockings, baseball's first openly all-professional team, was founded in 1863, and became fully professional in 1869. The Red Stockings won 130 straight games throughout 1869 and 1870, before being defeated by the Brooklyn Atlantics. Star players included brothers Harry and George Wright, Fred Waterman, and pitcher Asa Brainard. The 1869 Red Stockings made an eastern swing of 21 games and went undefeated. According to Walter Camp, the team received a banquet and a "champion bat...this rather remarkable testimonial was twenty-seven feet long and nine inches in diameter." The following year, the team lost only one game. They were defeated at the Brooklyn Athletic's Capitoline grounds park. According to Camp, the Red Stockings lost 8–7 in 11 innings. The game apparently served as a precursor to today's unruly crowds because he wrote: "A crowd of ten thousand people assembled to witness this match, and so lost their heads in the excitement as to give the Western men a very unfair reception." [See: "Base-Ball For The Spectator" Walter Camp, Century Magazine October 1889] The Red Stockings lost many players and their namesake in 1870, when the team decided to dissolve. The name went to Boston where, in 1871, a new team featuring some of Cincinnati's former stars began play as the Boston Red Stockings. This franchise would eventually become the Atlanta Braves. A new Cincinnati Red Stockings team became a charter member of the National League in 1876, five years after the first Red Stockings team. The second Red Stockings team was expelled from the league after the 1880 season, for 'violating' rules which had not yet gone into effect: namely, serving beer at games and allowing their park to be used on Sundays.

A third Cincinnati team of the same name was founded in 1881, becoming a founding member of the American Association, a rival league that began play in 1882. That team (which is the same franchise of today) played for nine seasons in the American Association and won the Association pennant in 1882. The pennant winning club still holds the record for the highest winning percentage of any Reds club to date (.688). In November 1889, the Cincinnati Red Stockings and the Brooklyn Dodgers both left the Association for the National League. In the move, the Red Stockings dropped "Stockings" from their name.

The Cincinnati Red Stockings left the American Association in 1890 to play in the National League.  One of the main reasons had absolutely nothing to do with the team directly—the upstart Player's League, an early, failed attempt to break the reserve clause in baseball. The league's impending presence severely weakened both previously existing leagues, and, because the National League decided to expand and the American Association was weakening, the team decided to accept the invitation to become members of the stronger National League. It was also at this time that the team first shortened their nickname from "Red Stockings" to "Reds." The Reds wandered through the 1890s signing local stars & aging veterans. During this time, the team never finished above third place (1897) and never closer than 10½ games (1890).

At the start of the 20th century, the Reds had hitting stars such as Sam Crawford and Cy Seymour. Seymour's .377 average in 1905 was the first individual batting crown won by a Red. In 1911, Bob Bescher stole 81 bases which is still a team record. Like the previous decade, the 1900s (decade) were not kind to the Reds, as much of the decade was spent in the league's second division.

John P. Joyce was one of a significant number of Irish and Irish-Americans who played key roles in baseball's infancy following the American Civil War.  Read more about the Irish in early baseball here. 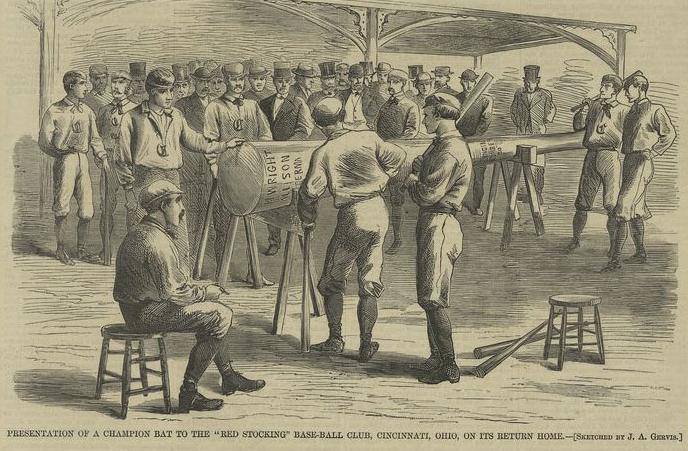 The Irish in Baseball