'The Irish Sword': A Community Chat All About Dick Dowling, with Mike Harrington The following is a transcript of the LIVE Wild Geese Community Chat hosted here at TheWildGeese.com on Sunday, September 8, 2013 with historian C. Michael (Mike) Harrington.  Some editing has been applied for clarity.

The Wild Geese: Glad to see each one of you who have stopped by for this evening’s LIVE community chat with Mike Harrington. Our focus this evening is on the Battle of Sabine Pass from the American Civil War, which occurred on this very day, September 8, 150 years ago in Texas ... and specifically the key role played therein by Galway native Dick Dowling (pictured at left)  We’ll now turn it over for the next 30-40 minutes to Mike who is coming to us live from Texas. Welcome, Mike!

Belinda Evangelista: Are there any living relatives of Dowling’s in Ireland today that you know of?

C. Michael Harrington: Belinda, the Dowlings departed Ireland for New Orleans some time after 1846, so any Irish relatives today would be distant. But there are Dick Dowling descendants living in southeast Texas today. Several showed up yesterday at Sabine Pass.

The Wild Geese: So you were at the (commemorative) events yesterday in Sabine Pass, correct Mike?

C. Michael Harrington: Absolutely -- along with several hundred others, plus about 400 re-enactors.

The Wild Geese: Tell us just a bit about that. 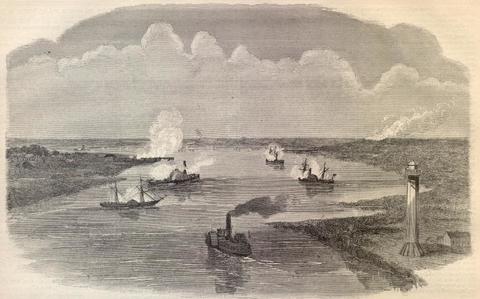 C. Michael Harrington: The State of Texas has a historical park at Sabine Pass, which is on the western side of the Sabine River, near where it flows into the Gulf of Mexico. Each year on the anniversary of the battle, there's a "Dick Dowling Days" celebration. Re-enactors in period costume were there, including infantry and artillery. There were the typical speeches by politicians as well as historians.

Ryan O'Rourke: I was reading about the huge disparity in numbers between the two sides at Sabine Pass. Just 36 Confederate infantrymen to the North's 5,000 (plus four gunboats). How did Dowling & Co. do it?

The Wild Geese: And no casualties for the Southerners, correct?

C. Michael Harrington: The two disabled gun boats -- USS Sachem and Clifton -- surrendered. About 35 of their men were killed. Another 350 taken prisoner. No Confederate casualties. The Federal commander called off the invasion, overestimating Dowling's forces. Dowling had to call on civilians to help with all the POWs.

Belinda Evangelista: He had a nickname 'Irish Sword' I think. How did he earn it?

C. Michael Harrington: Belinda is correct about Dowling's nickname. He earned it at Sabine Pass.

Ryan O'Rourke: I was reading something about the "medals" given to the soldiers by the local residents. Interesting stuff. Can you give us any details on those?

C. Michael Harrington: Only medals awarded to Confederate soldiers by the Congress in Richmond. Large silver medallions hung with Irish green ribbons and made out of Mexican silver pesos. They're priceless today. 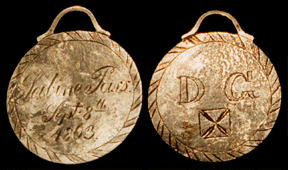 The Wild Geese: That's amazing. Any of them still around, then?

C. Michael Harrington: Just a few are known to exist. Several are in museums -- the Confederate museum in Richmond plus a couple in Texas museums. I know of only one in a private collection.

Ryan O'Rourke: So if I see one pop up on eBay, you're saying I should go ahead and make a bid.

C. Michael Harrington: If you're prepared to pay well into six figures, I suppose!

Ryan O'Rourke: I've been to the Museum of the Confederacy in Richmond when we were living there. Nice museum. Must have seen (the medal). I'll have to go back again and look for it when we're back there in November!

C. Michael Harrington: The museum is now in Appomattox. Bullock State Museum in Austin has one as does the Civil War Museum in Fort Worth. The medals identity the unit, the battle and the date and have a Celtic cross on them. I'm wrong -- no Celtic cross. Instead, a Rebel flag.

Belinda Evangelista: Are there any Dowling festivals held in Ireland to honor him? C. Michael Harrington: I wouldn't know, Belinda. An Irishman, Mr. Tim Collins, attended yesterday's festivities. I should have asked him but didn't.

The Wild Geese: Have you read Tim Collins' new book on Dowling? He's a fellow member of The Wild Geese. Nice looking book (pictured at right).

C. Michael Harrington: He's the guy to ask about Dowling observances on (the Irish)  side of the Atlantic.

Ryan O'Rourke: Is this one of the genuine medals, Mike? (pictured at right)

C. Michael Harrington: That's it. They were hammered out of Mexican silver dollars.

The Wild Geese: Have you ever seen one with the original green ribbon?

C. Michael Harrington: No, I've never seen one of the medals hung with the original green ribbon. Alas.

Dowling died (of Yellow Fever) at age 30. He's buried in Houston's oldest Catholic cemetery in the heart of the old Irish section of our city (which is nowadays heavily Hispanic).  He succumbed to the terrible Yellow Fever epidemic that swept Houston in 1867, also killing off a number of Federal troops who were occupying Houston.  Dowling's parents, Pat and Bridget, evidently died of Yellow Fever in New Orleans about 1853.  Yellow Fever, carried by mosquitoes, was a scourge in Southern cities before Dr. Walter Reed figured out the disease about 1900.

C. Michael Harrington: There's a picture of Dowling, wearing a major star (after his promotion following the battle), and he has the medal pinned to his uniform. Maybe he tossed the ribbon.

Belinda Evangelista: Given that he was a saloon keeper, I would propose that a cocktail be named "The Irish Sword." Cheers Dick Dowling. I raise a glass to you.

Ryan O'Rourke: Mike, there is a bar in the Ard Rí Hotel in Dowling's home area of County Galway named for him:

C. Michael Harrington: I must put it on my itinerary, Ryan. Are you familiar with his home town of Tuam? A street in downtown Houston bears that name.

C. Michael Harrington: We know little of Dowling's prewar life. His command at Sabine Pass was made up largley of common laborers -- dockworkers. But Dowling was quite literate, so perhaps he had some formal education.

Julianne Ní Chonchobhair: Maybe Collins' book has some info on that gleaned locally?

C. Michael Harrington: Dowling wrote a fine hand and good prose. He was also very handsome, with blue eyes and auburn hair by all accounts. He was amibitious and on his way to becoming a wealthy man when he died.

C. Michael Harrington: Dowling also married well. His wife, Annie Odlum, came from a prominent Houston Irish family. Her father was a hero of the Texas Revolution of 1836 and a large landowner. Never hurts to marry well. ... Dowling's men were devoted to him, and he to them. He had orders to spike his guns and retreat at Sabine Pass. Confederate HQ in Galveston thought Sabine Pass indefensible. But Dowling polled his men, and to a man they said -- stay and fight! Though the great bulk of Dowing's men were immigrants, they clearly identified with Texas, because they adopted the battle cry of the Alamo: Victory or Death. Dowling said so in his report on the battle.

The Wild Geese: That's fantastic, Mike. I've learned quite a bit in just a short time here about a man and a battle I knew nothing about.  We thank you so much for your time here this evening.  Everyone be sure to keep your eyes peeled for one of those medals on eBay!

Julianne Ní Chonchobhair: Thank you, it was really interesting!!

The Wild Geese: Thanks so much for your time, Mike. And thanks to those who joined us in the chat room this evening.

The Wild Geese: Have a good night, everyone! (Oiche mhaith, gach duine!)

The Irish at Sabine Pass

This Week in the History of the Irish: September 8 - September 14