To say that the Irish built the Erie Canal is an exaggeration, since there were British and Germans who worked alongside them, but to say that they were the backbone of the Erie Canal is entirely fair, with over 3,000 Irish immigrants hired on to dig trenches, four feet deep, seven feet wide. and 363 miles long. Armed with pick axes and shovels, it was backbreaking work, from sunup to sundown for little pay (between 37 and 50 cents per day), but it was commonly acknowledged that the Irish were a very hard working bunch in spite of that.

The working conditions were deplorable and dangerous, not just because of the nature of the work itself, but because of the fear of malaria and cholera, labor riots and armed conflicts fueled by alcohol, which flowed heavily, a ration of whiskey even being offered as part of their pay.

There was a natural divide of the New World, all of the original thirteen colonies being located near the Atlantic coastline, with no easy way to traverse the Appalachian Mountains, making it impossible to get to the hundreds of miles that lie to the west. Linking the Great Lakes with the Atlantic coast was a brilliant idea, the brainchild of New York Governor Dewitt Clinton. George Washington actually attempted an ill-fated canal project, but the engineering know-how and manpower were lacking.

The Erie Canal was begun On July 4, 1817 and was completed in 1825. From the Port of New York City, the canal would connect the Hudson River at Troy, New York (near Albany) through upstate New York to Buffalo, Lake Erie and the other Great Lakes. It was a huge success, opening the doors to migration and trade to the west, thanks to the speed and ease of transport the canal provided.

The Irish laborers worked closely with canal engineers, and in doing so, encountered many “first-time” obstacles together, figuring out how to overcome those obstacles and learning how to do things faster and more efficiently. After all, they had no canal engineers or laborers on hand, so they learned the trade together. Together they invented the wheelbarrow and a stump-puller, which greatly hastened the clearing of the land. They gained many valuable skills and were hired on to lead subsequent canal projects.

Not only did the Irish Iend their unique hard work ethic to the canal, they also put their stamp on it in many other ways, including "canal songs" that they wrote, fashioned after popular Irish tunes, with new words to fit the environment. And of course, they settled in towns all along the canal route, seen in the architecture of buildings, reminiscent of Ireland.

Most importantly, the Irish played a key role in turning New York into a leader in the world economy. 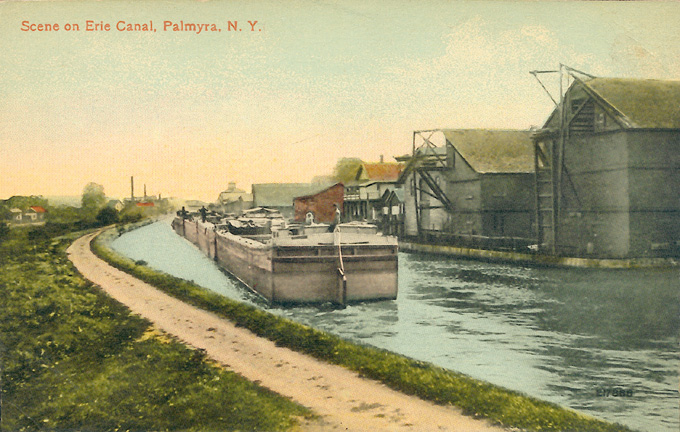 Irish Immigrant Participation in the Construction of the Erie Canal

No one works harder than the Irish or the Irish American.

thanks! do you have info on the group pic? My 2nd great grandfather was most likely a blacksmith or laborer with the NYS canal system and I've never seen a picture of him.

I clicked the link for Irish Immigrant Participation in the Construction of the Erie Canal and it didn't work. Do you know of any documents that show workers names? I am pretty sure my husband's Irish immigrant 2nd gr grandfather came from Ireland to work on that. Some of the children were born in NY some in Canada!

Ann, I had the same problem with  the link. So just googled the title and found it in 2 locations:

This appears to be a great resource - well-documented history of the Erie Canal's beginnings. I saw a few names, mostly of those 'in charge', but there are so many references that might lead to actual laborer's names.

What's really interesting to me as that my 2nd great grandfather sailed from Liverpool on the DeWitt Clinton and DeWitt Clinton, the man, was Governor of NYS (1817- ) and instrumental in the creating the Canal. According to this book, "We should also remember that Governor De Witt Clinton was a supporter of the Irish and enjoyed considerable support from them, and he courted their votes."

Hope you find some treasures!

Yes, I'm not sure how that link became broken.  Thanks for troubleshooting that, Beth!

you're most welcome! thanks for the article!

Thank you, that is what I ended up doing. The links were excellent. I am going to keep searching to see if somewhere there is a list of workers, but it did lead to a few new locations to search for the family in NY!

You're most welcome! glad that the links were helpful. If you do find a list of workers, please let me know.

A little more detail on my ancestors involvement. My 2nd great grandparents, David and Elizabeth (Martin) LITTLE arrived in Castle Garden, NY in November 1856 from County Down. In researching them, I discovered that they spent a few years in NYS before joining Elizabeth's MARTIN family in Garrett County, MD in 1863 and wondered why. That led me to exploring the Erie Canal System still being developed at that time. Although I've not found actual employment records, I did find that it was likely David worked as a mason (occupation listed on ship's manifest) and blacksmith (occupation listed on marriage certificate) in the development of the NYS canal system and the railroads. In 1857 - 58 they lived in Ithaca which is along a canal. In 1858 - 1863 they lived in Jamestown and Watertown. The Watertown and Rome Railroad which became the Rome, Watertown and Ogdensburg RR in 1861 runs through where they lived. Glad to share other research.