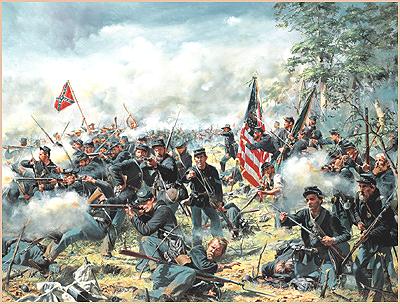 "The land of the Shamrock, as on other fields, contributed its quota on the strongly contested ground." - Colonel Joseph Newton Brown of the 14th South Carolina, a veteran of the Pickett/Pettigrew Charge, writing of the battle of Gettysburg

in many ways represents the struggle to define America in the mid-19th century. In many ways, too, those three bloody days in July 1863 helped to define the nature of several ethnic groups in this country, particularly the Germans and the Irish. In the hour of need of the two struggling nations, at Gettysburg and many other Civil War battlefields, the Irish nobly fulfilled their duty.

Among the battle's casualties were many sons of Erin, who served in large numbers in both armies. More than a million Irish immigrants had come to America during the preceding four decades, seeking an opportunity to rise above the poverty they faced in Ireland. While most remained in Northern ports of arrival, hundreds of thousands originally emigrated to or moved to the South, drawn by better pay, a generally warmer welcome, and an ample supply of jobs. When war broke out, they flocked to the colors of their adopted states.

For the boys in blue, the Philadelphia Brigade's 69th Pennsylvania

Infantry, which was almost entirely Irish and marched under a green regimental flag, was in the eye of the storm on July 3 directly in front of the famous Copse of Trees that was the objective of Pickett's Division. The 69th was like a rock as that high tide of the Confederacy lapped around it and was still in place when the tide rolled back. The men of the 69th lost their commander, Col. Dennis O'Kane, that day but, before he died of his wounds two days later, he managed to keep his regiment in place and fighting when other regiments ran and the battle appeared to be in doubt. O'Kane's Irishmen lost half their number on that terrible day.

Like the Tammany Regiment, the 40th New York, the "Mozart Regiment," had its roots in New York City Democratic circles. Led by "Fighting Tommy Egan," the 40th had been recently reinforced by three-year recruits from the former 37th New York Infantry, a.k.a. the "The Irish Rifles" and three other regiments, Egan's men helped stem the Confederate advance on Little Round Top by charging down into "The Valley of Death" near Plum Run. The regiment's monument and a rock carved by the men of the 40th to mark their position that day, can be seen from the access road to Devil's Den.

Also on the Federal side, the tiny remnant - only 530 men - of the famous Irish Brigade, fought in the killing ground of Rose's wheatfield on July 2

, led by Galway-born Colonel Patrick Kelly. The brigade emerged from its gallant delaying action in theWheatfield

and Rose's Woods minus 40 percent of its men, but with all its flags and its honor intact.

regiment, under County Tipperary-born Col. Patrick Guiney, was part of the Fifth Corps. The "Irish Ninth" fought well against the Stonewall Brigade on Brinkerhoff's Ridge but managed to avoid heavy casualties in the battle.

A brave Irish colonel, Patrick O'Rorke, of the 140th New York, of Rochester, N.Y., died with many of his men defending the west side of Little Round Top on July 2. O'Rorke, for whom Gettysburg's well-known, modern-day Irish tavern is named, hailed from County Cavan and his regiment included two companies that were predominantly Irish.

Capt. James McKay Rorty , of Donegal, who had once made a daring escape from a Confederate prison, was killed while desperately trying to keep one of the guns of his Battery B, 1st New York Artillery, in action during Pickett's Charge

. Derry-born Col. James F.X. Huston was killed on July 2, while trying to rally his 82nd New York near the Peach Orchard as the assault of Longstreet's Corps rolled over it.

Cork-born Col. Thomas Smyth commanded the Second Brigade, Third Division, of the Second Corps at Gettysburg where his men distinguished themselves in fighting at the Bliss Farm on the second day and in the defense of Cemetery Ridge during the Pickett/ Pettigrew Charge. Smyth, who would briefly command the Irish Brigade in the spring of 1864, would die the same day as Lee's surrender at Appomattox, April 9, 1865, succumbing to a head wound suffered two days earlier from a sharpshooter's bullet.

On the Confederate side

, Irish patriot John Mitchel's son Willie fell with the color guard of the 1st Virginia as his regiment assaulted the position held by the 69th Pennsylvania during Pickett's Charge.

There were a number of Irish companies in various Confederate regiments on the field, especially among the two Louisiana brigades in Richard S. Ewell's Second Corps, and in several Georgia regiments. The State of Louisiana, New Orleans in particular, had a large Irish population, which was well-represented in the gray ranks at Gettysburg. Similarly, many Irish immigrated to the Savannah, Georgia, area and fought in the Peachtree State's ranks in Pennsylvania.

" brigade, in Jubal Early's division, was largely Irish in its make-up. The 6th Louisiana

fought well on July 1, 1863 and suffered heavily when it participated in Early's twilight assault on Cemetery Hill the next day. The 6th left fully one-quarter of the 222 men it took into the fight on the fields near Gettysburg

Similarly, the 10th Louisiana, which was about 40 percent Irish, suffered heavily in its attacks on Culp's Hill on July 2 and 3. The 10th Louisiana was part of Williams' Louisiana Brigade in Edward Johnson's division. The regiment suffered 91 killed and wounded, with no figures officially recorded for "Missing."

County Tyrone-born Colonel Robert McMillan's 24th Georgia Regiment, which had a large number of Irishmen, was part of Wofford's Brigade (McLaws's Division, James Longstreet's First Corps). It fought well in the area of Gettysburg's Wheatfield. Seven months earlier, the 24th Georgia had helped to defend Fredericksburg's famous stonewall against the Irish Brigade. At Gettysburg, they once again helped to drive the Irish Brigade from the field, losing 36 men in the process.

Like the rest of the nation, the Irish-American community bound up its wounds after the end of the war. In one of the more poignant and ironic coincidences in the history of the Irish at Gettysburg, the famous Celtic cross monument to the three New York battalions of Kelly's Irish Brigade, which stands today in the woods near the Wheatfield, was sculpted in 1888 by an Irish immigrant from Louisiana who fought in the Confederate ranks at Gettysburg.

OTHER WGT ARTICLES ON THE IRISH AT GETTYSBURG