Introduction: On May 15th, 2004 the 1st Battalion of the 69th Infantry Regiment, New York Army National Guard, the "Fighting 69th," was mobilized into active federal service in support of Operation Iraqi Freedom. This was the latest call to arms for this ancient unit which has faithfully answered the nation's calls since its formation in 1851. The 69th's ties to New York State and indeed New York City are inseparable and reflect New York's immigrant "melting pot" history as much today as ever before.

Although it traces its lineage through the Irish community of New York City, for much of its history the 69th has always drawn many of its members from all other races and religions who live and work in New York. Today the 69th Infantry proudly claims a place among America's most racially diversified organizations within the U.S. military as it also gallantly reaffirms its place as one of America's most storied combat units…though not without pain through its most recent sacrifices under fire.

The World Trade Center: No retelling of the 69th's recent history can be made without a brief mention of the 69th's selfless service at the site of America's worst terrorist attack on September 11, 2001. The 69th, situated in the heart of Manhattan, is only minutes away from the financial district of New York City and responded with medical and search teams within the first hours following the disaster.

Throughout those first terrible days the 69th provided ever greater manpower at the WTC site. One of the 69th's own, LT Gerard Baptiste, perished as a NYC fire fighter on that fateful morning. For nearly two and a half years the 69th provided support in lower Manhattan, key bridges and tunnels and at the United States Military Academy at West Point, New York. The 69th Infantry was participating on the Global War on Terrorism when much of America still had not heard the term. Training and Organizing: The 69th had been destined for a tour of duty in the Balkans when its orders were changed and it was redirected to begin training for deployment to Iraq in early 2004. Swinging into high gear the officers, non commissioned officers, and men of the battalion (nearly 800) began to alert relatives and employers that they would be leaving soon while also packing and training every waking moment. In late May, 2004 the battalion "shipped out" from Camp Smith to Fort Hood, Texas and then Fort Irwin, California to undergo extensive and painfully rigorous combat training and desert acclimatization. Detached from service with the famous 42nd "Rainbow" Division of New York the battalion was attached for the duration of its deployment to the 256th "Tiger Brigade" of Louisiana (right, their unit insignia). Although antagonists in the American Civil War these two gallant old units bonded together to achieve a common purpose. The 69th Infantry received its Nom de Guerre "Task Force Wolfhound" in honor of its ancient Irish ancestry; as it went through this period, and under its umbrella, New Yorkers from throughout the state and "Tigers" from Louisiana were assigned to it. This amalgamation of manpower insured that the Task Force became tactically stronger than its original configuration through the addition of a company of powerful Bradley Fighting Vehicles, artillery spotters, staff officers, and other critical team members.

Moving out: After a short leave, the 69th finished its final preparations and was flown to Kuwait, arriving in October 2004. Here the battalion unloaded and prepared itself for the long drive north to Baghdad. Anxiety set in at this point knowing that the enemy was before it, but the 69th, as it has done many times before, set its mind to the task, "crossed the berm" as it is called in Kuwait and began the long road march to Iraq arriving in Camp Liberty, Baghdad on November 6th, 2004. The Fight for Al Taji: After only two weeks the battalion was told it would move again to the Al Taji province some thirty miles north of Baghdad. As the battalion moved to and occupied its place at Camp Cooke in Al Taji the general impression was that the area was a bucolic farm area with small villages and little visible violent activity. This was shortly to change in a profound way.

The Task Force mission was to force enemy rocket and mortar teams away from Camp Cooke and it began its task with a will, patrolling day and night to interdict and destroy or capture the enemy. Although completely successful in achieving its mission the Task Force was also to undergo painful losses throughout its time in Al Taji. Patrolling the poorly repaired roads and trails in the cold, mud, and rain of the vast Al Taji area meant braving the enemy's direct fire ambushes and powerful improvised explosive devices (IEDs). While gallantly conducting these risky but essential patrols soldiers of the Task Force were killed and wounded and were forced to do the same to the enemy. The men of the Task Force grieved at their losses but proved their mettle by working all the more intensely to find and destroy the enemy. Through clever intelligence work by the staff and dogged field work by the line units the enemy's caches, safe houses, leadership, and logistics assets were rooted out and either captured or destroyed. Day after day Task Force Wolfhound forced the enemy to fight on an ever smaller battlefield and lose its effectiveness as a fighting force. 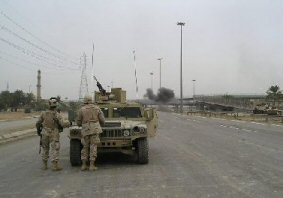 Back To Baghdad and the Elections: In late January 2005, having driven the enemy "to ground", the Task Force was considered too effective to leave in Al Taji and was directed to move back to Baghdad, integrate itself into the 2nd Brigade, 10th Mountain Division, the "Commando Brigade," and assist in the first free elections Iraq was to experience in more than a quarter of a century.

Occupying a destroyed department store in Baghdad the Task Force worked day and night to protect the people attempting to cast their vote. The enemy attempted to attack both the voters and the men of the Task Force but was unable to stop the process. Following the intense action in Al Taji, the rapid move back to Baghdad and continuous combat action for nearly two weeks a very tired Task Force Wolfhound was finally moved into Camp Liberty and given a short rest while it prepared for its next trial by fire.

Route Irish (The Airport Road): The next challenge for the Task force was its mission to "secure" the extremely key route between Baghdad International Airport and "the Green Zone" where the emerging Iraqi government was operating. Route Irish had already developed a legend as "the most dangerous road in Baghdad" and its security had both military and political implications. Nearly everyone who had business with the new government of Iraq had to travel Route Irish and the enemy knew it. For seven months the stalwart soldiers of the 69th fought on and around Route Irish, giving and taking casualties in the lethal ambush and raid environment that was western Baghdad. Although militarily superior, the 69th could not prevent the enemy from enjoying occasional success's in the arena of world wide public perception of high profile mayhem caused by IED's and the even more lethal Vehicle Borne (VBIED) suicide bombers. The paradigm began to change when two small Iraqi Special Police (ISP) battalions were attached to the 69th and this new found strength permitted the establishment of stout defensive positions along the access points to the route thus interdicting the enemy before he had a chance to conduct his terrorist attacks. The 69th experienced painful losses throughout its mission on Route Irish and fought the enemy with skill and courage even to its last days in the combat zone. Route Irish was secure in a way it had not enjoyed since the beginning of the insurgency two years before. It was time to come home. 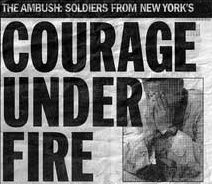 The Long Road Home: In September, 2005 Task Force Wolfhound began arriving home in Louisiana and New York. Its path took them back through Kuwait and on to Ft Dix, New Jersey or Fort Polk, Louisiana then on to home. The men from Louisiana went home to the devastation wrought on their state by the hurricanes of 2005; their active service continued as they worked to protect and clean their own neighborhoods.

(Left: In the August 6, 2005, edition of the New York Daily News, a headline stripped across two pages reads "THE AMBUSH: SOLDIERS FROM NEW YORK'S FIGHTING 69TH TELL OF DEATH AND BRAVERY ON STREETS OF BAGHAD.")

Some men made a longer trip through various hospitals in Germany or the United States and for some of the more severely wounded their journey is not yet complete. For those nineteen wonderful guys who made the ultimate sacrifice for a free Iraq, a secure America, their brothers in arms and their families now bear the painful burden of continuing life's journey without the love and support of their gallant soldier. To these families, to our wounded, and to the hope of emotional peace and happiness for the soldiers and families of Task Force Wolfhound, I dedicate this message.

The above summary and highlights of the 69th Infantry's service in Iraq was compiled by Lt. Col. Geoffrey J. Slack, who served as commander of 1-69 Infantry from September 2000 through February 2006. He commanded Task Force Wolfhound while serving in Iraq.

Members of the "Fighting 69th" / Task Force Wolfhound who made the ultimate sacrifice for a free Iraq, for a secure America, and for their brothers in arms - they have joined the legion of the fallen of the Fighting 69th, their memory must be kept forever green.

Irish Soldiers in Iraq: Past and Present