The Civil War and the Irish in New Orleans At the onset of the Civil war, New Orleans was protected in part by Fort Jackson, located sixty-five miles down the Mississippi River. On April 27, 1862, confederate soldiers, a majority of whom were German and Irish immigrants mutinied against their commanding officers at Fort Jackson. New Orleans fell to Union forces soon thereafter

The election of Abraham Lincoln was seen as a call to war for many Southerners.  On January 26, 1861, Louisiana joined five other southern states in a vote to secede, and within the first year of hostilities an estimated 25,000 men in Louisiana enlisted to fight for the Confederacy, among them many Irish. At the start of the war, New Orleans was one of six locations in the United States, which had a US Federal Mint. After the war began, the Confederates quickly requisitioned all the gold and silver located there and then spirited the specie out of the city before it could fall back under Union control when attack on the city appeared imminent. Consequently, cash was in such short supply in New Orleans that streetcar tokens and omnibus tickets were used as currency.

The importance of New Orleans as a port and control of the Mississippi river was not lost on Lincoln. Union forces targeted New Orleans and successfully captured the city in April 1862 without a fight leaving the largest and most prosperous city in the Confederacy under Union control for the remainder of the war.  However, the occupation of the city did not discourage its residents from showing defiance to Yankee rule, nor did it stop the Irish from enlisting to fight for the Confederate cause.  Hibernian sentiments in New Orleans might perhaps have been best captured by Father Mullon’s reply to General Benjamin Butler’s accusation that the good priest had refused to bury Union soldiers to which Mullon replied  “The charge is false General.  I’d be delighted to bury any Yankee, including yourself.”

The Irish had a reputation for bravery, violence and rowdiness.  High consumption of alcohol was customarily followed by brawls. “Four or five drinking Irishmen were in the habit of coming into camp late at night and in a drunken condition making life hideous” one soldier complained.  Captain Monaghan reported that one of his own men, James McCormack, was killed by one of Wheat’s Tiger’s after a dispute between the men.  Monaghan had the killer tracked down and brought back to camp for trial. 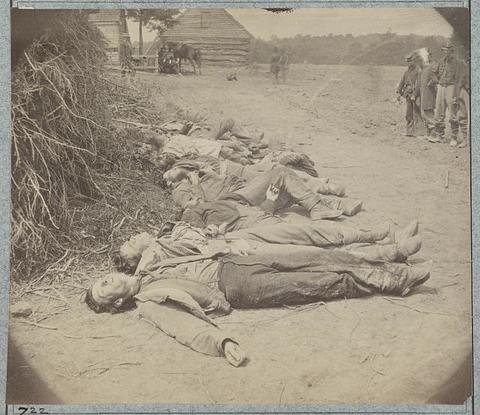 The Louisiana Tigers were a tough lot, and they did not take orders easily. The men demanded frequently that their commanding officers prove themselves before they would obey them.  Lt. Col. Charles de Choiseul, a French Creole, experienced this first hand when he was asked to take over the Louisiana Tigers temporarily from Major Chatham Roberdeau Wheat while the Major was recovering from a wound. When he heard of this appointment, Choiseul wrote to a friend, “I am a victim of circumstances, not of my own will. … Whether the Tigers will devour me, or whether I will succeed in taming them, remains to be seen.”  As he feared, the men openly challenged his authority. Tension escalated quickly, and Choiseul had to threaten to shoot any man who “raised a finger”.  Predictably, the threat resulted in one of the Tigers challenging him. As Choiseul recalled a “big double fisted ugly looking fellow came at me & said ‘God damn you, shoot me.’”  So Choiseul complied and shot the man at point blank range. The bullet knocked out a several teeth and the lower jaw of the soldier as well as cut his tongue.  With authority now persuasively restored, the Tigers accepted Choiseul.

The Louisiana Tigers spread fear not only among Yankee soldiers but even other confederate divisions and civilians.  One soldier in Alabama stated “I was actually afraid of them, afraid I would meet them somewhere and that they would do me like they did Tom Lane of my company; knock me down and stamp me half to death.”

However, with this reputation for fierceness came also one of extreme bravery.  General Thomas “Stonewall” Jackson considered his Irish the essential part of the “foot cavalry”.  Courageous acts, such as refusing to retreat even after they had run out of ammunition in the Second Battle of Bull Run, substantiated this reputation. It also cost them very dearly: at the start of the war, the Louisiana Tigers had 12,000 men; four years later only 373 remained - a death rate of 97%.

A variety of reasons motivated the Irish to join these units. Money certainly played a part.  The $10 enlistment bounties were a real boon to any workingman. However, other motives existed. Singular to the Irish, was the comparison of British oppression of the Irish with the view that the Civil War was simply Northern attempts at subjugating the South.

I believe the North is about to wage a brutal and unholy war on a people who have done them no wrong, in violation of the government.  They no longer acknowledge that all government derives its validity from the consent of the governed.  They are about to invade our peaceful homes, destroy our property, and inaugurate a servile insurrection, murder our men and dishonor our women. We propose no invasion of the North, no attack on them, and only ask to be left alone.  They cannot conquer us but would turn the wolf from their own door by letting this idle, brutal mob come here to be destroyed. . . . Our army is for protection, Lincoln’s to subjugate and enslave the whole Southern people and divide the property among his vulgar unprincipled mob.

To any Irish national, the words “North” could easily be substituted for “British” and “South” swapped for “Irish”.  Ardent Irish nationalist and journalist, John Mitchel’s own son (also named John) fought, and ultimately died, for the Confederate Cause.  He conveyed this sentiment shortly before his death in 1864  “I die willingly for the South, but oh, that it had been for Ireland”.

While many Irish saw parallels with the fight for the Confederate cause and the fight against British oppression, they also viewed the abolition of slavery as detrimental to their economic and social standing in the South.  In the predominant racial hierarchy of the Deep South, even the poorest Irish person was legally better off than any person of color.  Abolition of slavery also brought the grim reality of increased competition for jobs and fears that an over-supplied labor market would lower wages.

Finally, support for the confederacy was also a means of displaying patriotism, and their reputation for fierce fighting earned them respect from other Louisianans. Like many Southerners, most Irish saw the war simply in terms of defending their own home and protecting their interests, economic and otherwise.  America in general, and New Orleans in particular, had offered Irish immigrants a chance at prosperity unimaginable at home.  The majority of the Irish in the city had just spent the last ten to twenty years constructing new lives for themselves, creating communities, and building churches, school and orphanages.  All of these factors were worth fighting for.

Meanwhile, Back at Home ... The World Seemed to Have Turned Upside Down ... One resident in the Irish Channel recalled that “after the war- times were tough “you couldn’t get coffee.  You drank sassafras tea, Orange leaves tea and mint tea… people were poor, Confederate money was no good. Yankees came here and burned up everything. I remember some of this through hearing my parents talk.” Life was not easy for family members who remained in New Orleans. Food shortages were acute. General Benjamin Butler’s decrees were excessive and most New Orleanians miserable.  When one woman was turned away from the “Free Market” because supplies had run out, she responded by attacking the first Union soldier she saw: blaming the United States government for her hunger and misery.  This event led to a general outcry of protest from the women in the city and the subsequent passing of the infamous Woman Order No 28 by Butler.  It decreed that any women insulting or showing contempt towards a Union solider would be arrested and labeled a prostitute, specifically stating the  "she shall be regarded and held liable to be treated as a woman of the town plying her avocation."

Enforcement of Butler’s many official orders (over 200 issued) reached extreme levels. In July 1862 the US Congress passed the Second Confiscation Act, which required that all citizens (in conquered Confederate territory) take an oath of allegiance or have their property confiscated. In New Orleans, 68,000 people did take this oath but many others refused.  Consequently, Butler issued another order demanding that all residents who had not taken the oath must register as an enemy of the federal government. In addition, those who refused to take the oath also had to give detailed information about their family members and the property they held.  Butler sent the police to actively seek out residents and demand that they take the oath, register as an enemy of the state or be arrested.  One police officer, Robert Gordon, went so far as to ride his horse into bars and then demand that the patrons not only sign the registry papers, but that they also buy a drink for him and his horse. After several of these encounters, the horse as well as the rider, were quite “tipsy” as reported in the Daily Picayune.  Gordon was eventually arrested, not for intoxication or riding a drunk horse, but for accosting and then threatening a German woman.  Residents of the city impatiently waited for normalcy to return.

However, New Orleans’ prosperity did not return after the war.   As with most of the South, times were tough, and while Irish desired a return to normalcy - as did many white southerners- normalcy had been redefined.  The reality of emancipation did not sit well with most children of Erin. Many Irish became ardent supporters of white supremacy, in part to defend their economic standing.  Good times, however, failed to make a strong comeback, and New Orleans started her slow descent into the City That Care Forgot.

“I find I am completely done for, alias fried, alias ruined—the merchant here to whom my cotton was consigned and who wrote to N.O. [New Orleans] quoting my cotton worth 1s-7 ½ d a pound and advancing in value—informs me today that they have not sold it at all.  I of course was relying on this cotton paying me large profit . . . now instead. . . . I will be in debt on the transaction over 1200 [pounds sterling].” O’Regan continues the lament to his sister in Ireland stating he has “met a great many of my Louisiana friends here—all Cotton traders and all ruined . . .  I am very miserable and don’t know what to do exactly.”

One resident in the Irish Channel recalled that “after the war- times were tough “you couldn’t get coffee.  You drank sassafras tea, Orange leaves tea and mint tea… people were poor, Confederate money was no good. Yankees came here and burned up everything.”