The British Question (And How They Kept Disgracing Themselves) I had decided not to go on the Bloody Sunday march in Derry, my home town, because I was too frightened. I felt I had good cause. Word was that British parachute regiment was to be on duty here that day and I knew they had gone on a prolonged killing spree in Ballymurphy, Belfast, the previous August during anti-internment protests. The ten they murdered included a mother of eight children and a Catholic priest who was on his knees giving the Last Rites to a dying victim. The eleventh died of heart failure after being subjected to a mock execution by soldiers.

Above, photo taken 9 August 1971, shortly before the British parachute regiment went on their mass murder rampage in Ballymurphy, Belfast, on the day internment (imprisonment without charge or trial) came into force. Internment was introduced by N. Ireland Prime Minister Brian Faulkner and approved by British Prime Minister Edward Heath. This sinister duo had form. To find how they originally plunged our Six Counties into a thirty year bloodbath please see http://thewildgeese.irish/profiles/blogs/3rd-of-july-1970-day-of-tr...

Unlike on Bloody Sunday, however, no journalists were present during those murder hours, no camera crews filmed  the events, and there was no international condemnation of the killings.

On top of all that I went with a friend on a Civil Rights anti-internment march outside Magilligan prison camp eight days before Bloody Sunday and nearly had the life scared out of me. All of the people held prisoner in that camp had been dragged out of their homes throughout the Six Counties in the early hours of internment day. The soldiers who were assigned to prevent the marchers from getting near the perimeter wire of the prison camp were from the self-same British parachute regiment. As we the marchers edged closer along the beach to the perimeter wire of the internment camp (Magilligan was a popular seaside holiday resort) the paratroopers fired rubber bullets and CS gas at close range into the crowd. I remember saying to my friend as we advanced “There comes a time when fear doesn’t matter” just before one rubber bullet hit him on the shin and another brushed the hair above my ear. So much for brave words. I quickly realised how close I had just been to losing my sight or being killed and went into mild shock. I don’t remember much of what followed. But I heard later that many of the paratroopers severely beat protesters. John Hume, who was present, later accused the soldiers of "beating, brutalising and terrorising the demonstrators." Civil rights protestors from Derry met the Paras for the first time a week before Bloody Sunday, when they were batoned off the beach during a peaceful protest near Magilligan Prison. The spot was chosen because there were internees in the prison, and also because marchers could not be accused of threatening damage to property while marching on an open beach. (Words by Eamon Melaugh) John Hume is second from right among the marchers. Members of the parachute regiment can be seen taking up position on the right hand side of the picture.

A few miles down the road from Magilligan was a disused 2nd World War airfield at Ballykelly. What we didn’t know then was that in the months leading up to the introduction of internment the Brits had prepared a purpose-built torture centre there. Of the hundreds of people interned on 9th August, 1971, fourteen were brought to this secret compound and tortured. They were uncharged, untried and unsentenced individuals. But they were also guinea pigs for their reactions were being observed during the so-called Five Techniques that they were subjected to. These were wall-standing, hooding, subjection to white noise, deprivation of sleep, and deprivation of food and drink. Some of them were shackled and blindfolded and then brought into helicopters. Some time after they were airborne they were dropped screaming from the helicopters. They didn’t know until their feet touched terra firma that the dropping operation had taken place just inches from the ground. Observations were made and notes were taken. 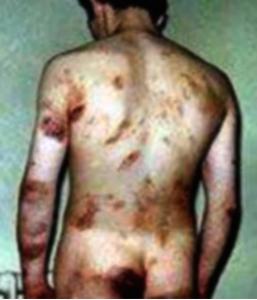 A contemporary medical photograph showing the injuries suffered by one of the Hooded Men, Irish civilian detainees tortured by the British occupation forces in Ireland. FULL LINK: https://ansionnachfionn.com/2015/07/25/the-hooded-men-british-tortu...

It is worth emphasising here that the torturers looked on all this as a dry run for conflict situations that would surely lie ahead. And so it turned out. To give one example: after the invasion of Iraq in 2003 an Iraqi hotel worker called Baha Mousa died after being tortured by British soldiers. It emerged at an inquiry into his death six years later that he had died after having being beaten and subjected to the “Five Techniques.” The UK was still using these techniques: wall-standing, hooding, subjection to white noise, deprivation of sleep, and deprivation of food and drink.

None of those tortured at Magilligan would ever recover from what was done to them. Four have since died. Now nine of the 10 “hooded men” who survived, along with family members of the four deceased, are involved in a major court case.

The background to this is that the Hooded Men won their original case against the UK in 1976 when the European Commission of Human Rights ruled that the techniques came under the heading of torture, but these findings were overturned by the European Court of Human Rights (ECtHR) on British appeal two years later. It ruled that while the Five Techniques amounted to “a practice of inhuman and degrading treatment” they did not cause suffering of the intensity and cruelty to constitute torture.

Francie McGuigan, one of the Hooded Men, told the Irish Times in a prophetic warning at the time: “I think Strasbourg has now allowed all countries to use a certain amount of what they classify as degrading and inhuman treatment.”

The 1978 ruling was subsequently used as justification for the George W Bush administration’s notorious ‘torture memos’ outlining what interrogation techniques could and could not be used on detainees. Shortly afterwards the CIA was using the five techniques in Iraq, Afghanistan and in many other countries around the world.

In light of new evidence confirming that a policy of torture had been authorised by ministers – specifically the late British Prime Minister Edward Heath and the late Secretary of State for Defence Peter Carrington – the Hooded Men, backed by the Irish Government, have asked the ECtHR to reopen the case, censure the UK and officially classify the men’s treatment as torture. Top barrister Amal Clooney, who incidentally is married to George Clooney, is part of the legal team representing the group who are taking the case to the European Court of Human Rights in Strasbourg. Victory would be a huge embarrassment for both the UK and the United States.

Footnote: As for my fear of going on the Bloody Sunday march, I did go, but only after anger overcame fear. My anger stemmed from armed British soldiers taking over our family house in Derry shortly before the march began and positioning themselves at a bedroom window. Within one and a half short hours Parachute regiment snipers stationed at windows elsewhere had shot at least two of the marchers.
__________________

"But they were also guinea pigs for their reactions were being observed during the so-called Five Techniques that they were subjected to." My Father, who kept up on Ireland, told me about this many years ago when it was happening.

As an aside, he was in a British prison camp as a teenager. (He was born in 1902 and fought for independence.) His brother was carrying an important message and my Dad acted as a decoy. An older sister looked for and found him in a camp. He was starving. She saved his life.

Thanks for your comment Patdee (unusual spelling!) Horrendous experience your father had. So terrible. The Brits will never learn. The ruling classes over there are dysfunctional misfits who were almost certainly sodomised in their public schools and then went on to inflict the same on younger boys. Members of that ruling class who were remainers (re the referendum) were merely being pragmatic in my opinion and are almost exclusively contemptuous of Europe - and elsewhere - in their heart of hearts. I think they're a doomed clique.