'The Banner County' – Clare at a Glance In our last blog post we took a look at Tipperary, the Premier County. In this week’s post we take a look at the Banner County. In recent years the county has been making a name for itself on the GAA field once again, winning the All-Ireland in 2013 and having great success underage for a number of years now. Before all that, there has always been a rich history in Clare. There is a lot to see and it is the traditional music capital of Ireland. Its landscape and natural beauty is a thing to behold.  It also has some of the finest buildings, monuments and waterways. We wish we could give you a full tour but we have comprised a list of the must see things if you are ever lucky enough to set foot in the Banner County.

The Burren takes its name from the Irish word ‘bhoireann’ meaning, ‘a stony place’ or ‘a rocky place’, which is a good description for this 350 sq kilometres limestone plateau in North Clare. The rough, intriguing and attractive landscape was formed 320 million years ago under a tropical sea. Later it was shaped by ice, hard weather and, of course, man and his beasts. The Burren National Park is one of six National Parks in Ireland and the smallest in size. Three quarters of Ireland's species of flowers are found in the Burren. The Burren is rich with historical and archaeological sites. There are more than 90 megalithic tombs in the area, portal dolmens, a Celtic high cross in the village of Kilfenora, and a number of ring forts - among them the triple ring fort Cahercommaun on the edge of an inland cliff, and the exceptionally well-preserved Caherconnell Stone Fort. Corcomroe Abbey is one of the area's main scenic attractions. The Cliffs of Moher are Ireland’s most visited natural attraction and attracts up to 1 million visitors every year. They stretch for nearly 5 miles along the coast of Clare and look out into the Atlantic Sea. The Cliffs get their name from an old fort called Moher that once stood on Hags head, the furthest point south on the cliffs. On a clear day you can see 5 counties and also the Aran Islands, the Blasket Islands in Kerry, the Twelve pins mountains and the Dingle Peninsula from the Cliffs. The cliffs also sport a lot of wildlife and they are home to Ireland’s largest mainland seabird nesting colony. The maximum height of the cliffs reach 214 metres.  Most people probably don’t know that the cliff have appeared in a number of films including Harry Potter and the Half-Blooded Prince in 2009, and have featured on Father Ted a few times down the years.

Bunratty Castle is situated in the town of Bunratty in Co. Clare. It is also one of Irelands most visited attractions and it is Irelands most complete and Authentic medieval fortress and contains furnishings, tapestries and Art work from that period. The name Bunratty Castle comes from the meaning ‘Castle at the mouth of the Ratty’. Bunratty folk Park was build around the castle and it sits on a 26 acre site. The recreation of a town in 19th Century Ireland gives people a wonderful insight into life back then. It is an open air museum featuring around 30 buildings. The medieval town features farmhouses, a church, a post office, a pub, post office and various shops. The castle is also famous for the night time medieval banquets and traditional Irish nights, at which the ‘Bunratty Castle Entertainers’ perform, which are run throughout the year.

Christy Moore’s song probably put Lisdoonvarna on the map but even before his time the Lisdoonvarna Matchmaking Festival was a annual occurrence. It is one of Ireland oldest festivals and deserves an honourable mention here because of that. The Matchmakers of old were the dealers who attended street fairs, as it was they who know the farmers who had eligible sons and daughters around the country. They invited the farmers from all over Ireland to attend the Festival the following September, and it was they who collected the generous dowries when the matches were made. Today there are just two matchmakers left in County Clare. The festival now over 150 years old attracts up to 60000 people from all over the world, who come for the music, the dancing and the ‘craic’. Dancing takes place in venues all over town and in the newly reopened Spa Wells. Third generation matchmaker Willie Daly is on hand to bring hopeful singles together and boasts many marriages to date. 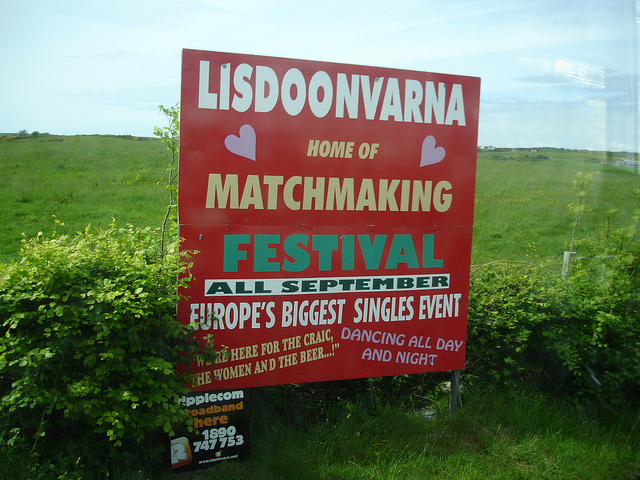 It wouldn’t be right if we didn’t mention at least one traditional music festival in Clare. The Feakle festival has been running for 25 years now. 5 Days of music, song, dance with concerts Céili's, workshops, lectures, recitals, singing and sessions. The Festival is based in the homely village of Feakle, East Clare, Co. Clare, Ireland. The Feakle Music Festival has its origins within the rich array of musical talents that abound on the East Clare area. A rich tradition has been maintained and strengthened thus emanating in a very successful Music Festival, from the era of the house dance, through the Hall dances and pub sessions . The Festival started some years ago in 1988 and has gone from strength to strength. It is now respected worldwide as one of the best of its kind in the country. The festival takes place in August every year, and if you really want to sample some pure Irish culture here is the place to start. The Premier County - Tipperary at a Glance

Comment by Patricia Magiollo on December 3, 2014 at 1:27pm
Really Wonderful places to visit and enjoy to full. I happened to be there in August 2001. The ring of Kerry, the dolmens, the cliff, Corcomroe Abbey, Bunratty castle and so many other towns, cities and landscapes made me feel so well that I wishto be back in Ireland soon.

gorgeous places to be visited......always felt Ireland like I was there before....it runs in my veins...