Pals to the End: Every Dog Has His Day Six weeks later, Stubby, the canine hero of the 102nd, was healed. The little scamp of a dog who had fought to survive on the streets of New Haven was was not easy to kill. He was sent back to the ranks, though the hospital staff and patients, who had been enjoying Stubby’s perky and therapeutic presence there, probably wanted him to stay longer. Life in the rear echelons was not for this war dog, however. Soon he was back with the man with whom he would share danger and fear, and, later, fame and fortune for the rest of his live.

Read Part One: A War Dog and His Irish-American Doughboy

As the Allies pushed the Germans back later in the summer during the Meuse-Argonne campaign, Stubby showed his value again, in finding wounded Americans on the battlefield and barking to bring medics to the soldiers' aid. His most famous combat exploit was the capture of a German who was apparently spying on the unit in no-man’s land. It was said that Stubby “sniffed him out” and brought him down when he tried to run, enabling his comrades to complete the capture. For this action, some stories say Stubby was given a field promotion to sergeant, thus out ranking most of the enlisted men in the unit, including his owner, Corporal J. Robert Conroy. He never “pulled rank” on him though. After the 102nd helped to liberate Château-Thierry, the women of the town made Stubby a chamois blanket “uniform” embroidered with the flags of the allies, with a Yankee Division patch on each shoulder, and “Stubby” written on the left. He is seen in photos wearing that “dress uniform” during numerous ceremonies the rest of his life. One of the decorations on it was an Iron Cross medal said to have belonged to the German he helped captured. Eventually his “unform" would include three Service Stripes, a wound stripe, the 1st Annual American Legion Convention Medal, the New Haven WW1 Veterans Medal, the Republic of France Grande War Medal, the St. Mihiel Campaign Medal, the Chateau Thierry Campaign Medal, a Purple Heart and a few others. When the “war to end all wars” came to an end on November 11, 1918, Conroy did not have the same worries about smuggling the now-NCO Stubby on the boat home. Anyone trying to stop him would have had to fight the entire Yankee Division. Before they left, Stubby and Conroy got to meet President Wilson, when the president made a Christmas Day visit to troops in France. It would not be Stubby’s last presidential audience. When they got back to the U.S., in addition to leading the 102nd in the Boston parade, Stubby led them in a parade through the streets of Hartford back in Connecticut and then in a final one in Conroy’s hometown of New Britain. Stubby received the same red discharge strip as the other veterans, and that was added to his “uniform.”

Conroy and Stubby also began a short career in vaudeville after getting out of the service. Vaudeville was essentially the television of that time. Stubby was billed as “the most famous dog in the army,” and Conroy worked at keeping Stubby’s fame alive and spreading. He won the Eastern Dog Club’s “Hero Dog” award at their Boston Show after Conroy nominated him for it.

When Conroy moved to Washington, D.C., in 1920, Stubby had arrived in the perfect place to keep his legend growing. Stubby was awarded lifetime membership in both the American Legion, the Red Cross, and the Y.M.C.A. When Conroy enrolled in Georgetown University, Stubby became the football team’s mascot, even putting on shows chasing a ball around the field during half-time. In 1921, the Humane Education Society (now the Humane Society) put Stubby on a float in a parade in the national capital (above), and they followed that up by awarding him a medal for his bravery in France. And they got none other than Gen. “Black Jack” Pershing, who had commanded U.S. forces in France, to present him the medal (right). He met his second president, Warren G. Harding, later that year a White House reception for wounded veterans, and got special attention from the First Lady, and he would later meet President Calvin Coolidge.

After Conroy graduated from Georgetown University, he remained in Washington, working in the office of a Connecticut congressman. Stubby and Conroy would travel all over the country to American Legion reunions. He was always a center of attention of the veterans and others and would march in a parade if they had one. The local papers would always mention his appearance.  Stubby was now famous from coast to coast. He was so well known that the Grand Hotel Majestic in New York City lifted its ban on dogs so Stubby could room with Conroy if they were passing through the city. As time when on Stubby slowed down a bit, but he and Conroy continued to make appearances at various events and parades. Early in 1926, Conroy got his war-time comrade one final honor. He applied for a full membership in the Eddy-Glover Post of the American Legion in New Britain. He sent in a membership form, complete with Stubby’s paw print “signature,” and, of course, the membership was granted. Not many people could refuse the heroic canine anything.

As all long-time dog owners come to know, one of the heart-breaking aspects of dog ownership is that their life spans are short. Stubby’s fame and all the love that was showered upon him couldn’t change that. In March 1926, his health began to fail. It was estimated that he was about 11 or 12 at the time, and terriers often live longer than that, but few of them ever lived as hard a life as Stubby had. Certainly his exposure to gas attacks during the war could have caused some health problems. Around midnight on March 16th, in the loving embrace of James Conroy, the tiny WWI veteran passed away. Dogs become members of your family, so their loss it always deeply felt, but the pain and anguish Conroy felt after all the two of them had been through together must have been extremely intense. Conroy must have had trouble imagining life without his little friend. It was a measure of Stubby’s fame at the time that he was eulogized with obituaries in several major newspapers. The New York Times ran a half-page obituary, more than most famous humans got. The New Britain Herald said of Stubby: “Stubby only a dog? Nonsense! Stubby was the visible incarnation of the great spirit that hovered over the 26th (Yankee Division).”

Conroy made sure that the world would not quickly forget his friend even after his death. He had the taxidermists from the Smithsonian preserve him on a plaster body and would take it with him to American Legion conventions and reunions. For nearly 30 years Stubby then “resided” in the Red Cross Museum in Washington.

Conroy had him back for a while in the 1950s. In 1954 a fire broke out in the high-rise building where he was living. People sometimes ask the question: if your house was on fire, what would try to save on the way out? Conroy escaped the building with just one thing: Stubby. Their friendship had survived long past Stubby’s death. As attached as he was to even the preserved version of Stubby, he knew there were others who could better honor his memory going forward. In 1956, Conroy donated Stubby, along with a scrapbook he’d kept about Stubby over the years, to the Smithsonian. Conroy would live into this 90s, not dying until 1987.

If you visit the Liberty Monument for soldiers from the First World War in Kansas City, you can see a brick there dedicated to Stubby (left). And you can still see Stubby “in the flesh” for yourself (below), wearing his medal-covered uniform on display as part of the Smithsonian exhibit The Price of Freedom: Americans at War in Washington. If James Conroy were still with us, he’d be happy to know that nearly 90 years after his heroic friend passed away, he has not been forgotten. And surely the little rascal from the streets of New Haven who rose to be a national hero and associate with presidents deserves no less. 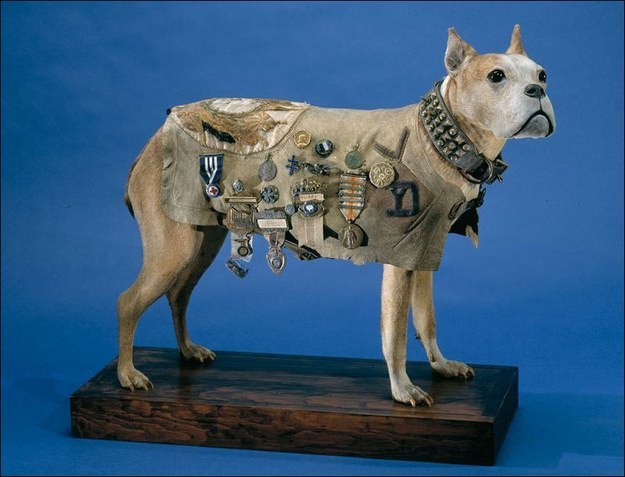 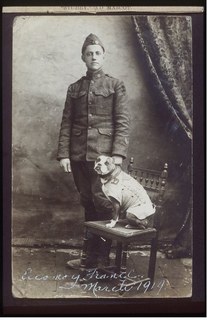 Sgt. Stubby cartoon from the BBC

The Smithsonian - Price of Freedom: Americans at War