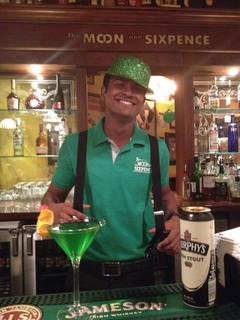 This was my third St. Patrick's Day celebration in Chennai, South India. Thanks to the opening of the Hon Irish Consul in 2013, and a little networking in both Ireland and India, we have a small community in the city, who catch-up at least once a year around St. Patrick's Day. Small is under 10 people in a city of 8 million. There are a lot of people in India and very few of them are Irish. We maybe small in numbers, but we're big in spirit and proud to be Irish in India. Now the Indians and other foreigners are joining us in turning the place green once a year; a touch of Irish.

St. Patricks, a well-respected school in the city, closes for the day and celebrates the feast of their founder. There are large shamrocks on the gates of the school, yet most people in Chennai have never heard of Ireland. However, this is changing. Ireland is playing cricket in the world cup, and cricket is like a religion here. With a population of 1.2 billion, where most people have a TV, there are a lot of people watching cricket. I've seen a family, who live on the side of the train tracks in steels huts, watching cricket on a TV sitting outside, with a fire going to cook. They may never know what a Guinness is, but they would have cheered on the green team in World Cup matches.

Our next export to facilitate a good St. Patrick's Day is an Irish pub, with live music and some craic. In a rapidly developing urban India, the middle class want to enjoy a good night out. So why not an Irish pub in India? There is a chain of Irish Houses; the domestic terminal has one, and there is soon to be one in the international airport terminal and at a shopping mall in the city. For those in the city who love music, there is The Moon and Sixpence, a bar/restaurant which was shipped to Chennai and built in a hotel. This was where the party was last Saturday: bar staff in Green, drinks were Green, the music was loud, there was dancing and singing and the Irish numbered about 5 to 245 Indians, but we sang...oh we sang. The following day, the Irish Hon Consul hosted a daytime brunch in a club called Dublin; what a buzz! There were about 250 Indians again and a few Paddies dotted among them. Guests wore from a touch to a lot of green, donned head boppers, flashing shamrock necklaces, and beads were presented on entry. Sr. Loreto (who celebrated her 70th year in Chennai last December) found a perch, popped her feet up, and mingled with those who came to chat. Otherwise she watched the passers by as they drank Champagne, Irish coffees and Whiskey. Safe to say, the Chennaites, who enjoy a dance and a party, partied like the Indians for an Irish festival.

Thanks for sharing, Aine!  Tell all your Irish pals over there about The Wild Geese; We want to hear more from the Irish in India. :)

Fascinating, Aine. Your account helps me understand why the Irish diaspora is so intensely loyal, and colorful!