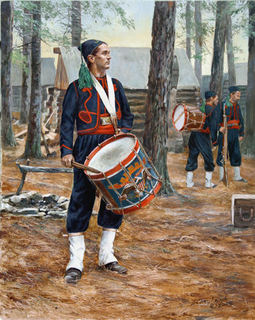 America's four-year Civil War often intruded as the Irish under arms geared up to celebrate St. Patrick's Day. Kevin O'Beirne, in Part 3 of 3, looks at the war's late years.

For St. Patrick's Day 1864, the Corcoran Legion was stationed on guard duty along the Orange & Alexandria Railroad between Fairfax and Burkeville, Virginia. The Legion's regiments were dispersed, so the Legion could not hold a massive celebration as it had in 1863. Each regiment arranged for its own festivities.

Sergeant George Tipping of Company I of the 155th New York recounted how he was detailed to travel by rail from Accotink Bridge to Fairfax to procure four gallons of whiskey for use by the 50 or so men of Company I (this ration works out to be about 10 ounces per man). Tipping was happy that day because he was sporting a new green shamrock sent from home, and it was noticed by the Legion's commander, Colonel Mathew Murphy.

The entire 164th New York was apparently quartered in one camp and their celebration seems to have been one of the more organized affairs in the Legion that St. Patrick's Day. The day dawned bright and sunny, and the 164th's camp was gaily decorated with pine boughs. The regiment was assembled in their Zouave uniforms and a program of games and festivities was announced, including climbing a 30-foot greased pole, mule races, a sack race, a wheelbarrow race, a chase after a shaved, greased pig, and a foot race. The prizes offered to the winners of these contests were many and varied: the winner of the pole-climb was to receive a new pair of boots positioned at the top of the pole and a furlough; the winner of the pig chase received the porker itself as a prize. The mule races were a source of much amusement and, in the words of one onlooker, ". . . many of the animals mastered their masters." In the first race, only five of 12 starting mules finished with their riders. The day was capped off with an officers' reception given by Colonel James McMahon. Notable guests included General Robert O. Tyler (a future commander of the Legion), several colonels, and many ladies. The evening was summed up thusly by one officer: "Conviviality reigned supreme; singing, dancing, &c. was kept up until an early hour next morning."

Boston's 9th Massachusetts Regiment spent the winter of 1863-1864 in winter quarters near Bealton, Virginia, in the vicinity of Culpeper Court House, along with the rest of the V Corps of the Army of the Potomac. Regimental historian Christian Samito wrote of this St. Patrick's Day:

The excitement of another St. Patrick's Day filled the regiment. At the entrance of each company street an arch of laurel, holly, and evergreen vines was erected… On St. Patrick's Day, all Irishmen in the division were given leave to be in the Ninth's camp, as were many from the army as a whole. The holiday commenced with Father Egan's service… Following this, Guiney and M.H. MacNamara both delivered an address, and watched a mock parade held by officers "promoted" from the ranks for the occasion. Foot and horse races and other games accompanied four rations of whiskey per man to make the day merry, and many officers and their ladies walked about with green sprigs on their clothing. At night a dinner was held, and a grand ball at division headquarters in a specially constructed tent wound up the day. The tent was decorated with rifles, crossed sabers, sashes of red, white, and blue cloth, chandeliers made of bayonets, and all the regimental [flags] of the division.

St. Patrick's Day 1865 was perhaps the saddest spent in the Army of the Potomac. The 37th New York and 9th Massachusetts had long since mustered out of the service when their enlistments expired, leaving in the Army of the Potomac only the Irish Brigade, the Corcoran Legion, and the 69th Pennsylvania. All of the Irish regiments had suffered heavily in Grant's 1864 Overland Campaign and the ongoing siege of Petersburg. By 1865, the four regiments of the Legion, having never received any new recruits, numbered less than 400 men (not counting a large, non-Irish heavy artillery regiment that had been added in May 1864). Scant information is available on the Legion's celebrations of March 17, 1865, but it most likely included a Mass celebrated by Father Gillen (Father Dillon, of the 182nd New York, had died the previous autumn), along with games and festivities. It is quite possible, with their diminished numbers and the proximity of their divisions' camps, that the Legion simply made the short trip to the camp of the Irish Brigade and celebrated the holiday there.

The Irish regiments of the Army of the Potomac had a well-deserved reputation as the most able partyers in the Union Army. Merriment and conviviality never seemed to be absent from their camps, but, when duty called and the Rebels were on the march, the Irish lived up to their other reputation, that of the fiercest fighters in the Federal Army. In this season of St. Patrick, drink a wee bit o' whiskey to the memory of our Celtic ancestors who served so nobly in the Army of the Potomac.