The official society of the Irish in Chile, “The Wild Geese”, will be celebrating Saint Patrick’s Day by turning some of Santiago’s famous landmarks green this Tuesday night. The celebrations kicked off with an evening of Irish music and dance last Saturday the 14th of March, in the Museo de Bellas Artes. 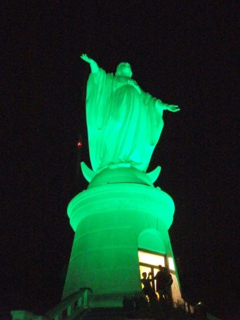 The event was a huge success, with over 600 people in attendance.  “Kaus” traditional Irish music band got feet tapping with their renditions of various Irish songs.  The Clarisa Rakos Irish Dance Academy roused the crowd with their jigs and reels.  An integral member of the Wild Geese Society, Ms. Bucknell, described her feelings about the celebrations saying “It’s fantastic to see Irish culture so far from Ireland, it makes the world feel a bit smaller….more like home”

Chile is the latest country to go green, joining more than 25 countries around the world in an initiative supported by the Irish government.  World famous landmarks such as the colesseum in Rome, the Empire State Building in New York City and Niagara Falls in Canada, will don their fifty shades of green for the occasion.   The Virgin on Cerro San Cristobal has been glowing green since Friday night.  Just outside of Santiago, in Rancagua, the Bernardo O’Higgins statue will go green, paying homage to the Chilean leader’s Irish roots.

The Irish Minister for Foreign Affairs and Trade, Mr. Charlie Flanagan describes the importance of the greening as “an enormous source of pride to people here in Ireland and to our diaspora overseas”.

The Wild Geese Irish Expat Society was originally formed in the mid-1990s and kick-started the first St Patrick’s Day celebrations in the city, the first two being in the US Ambassador’s residence, the next two at the Hyatt Hotel.

Since then, the St Patrick’s Day festivities have become a flying success in Santiago around March 17 every year, with restaurants, bars and museums stepping up to the plate.  In recent months the society has grown from 30 members to include more than 200 Irish and friends of the Irish, showing us the strong connections between Chile and Ireland. There are also three fully Irish owned bars in Santiago.  They are Fiddler's Irish Bar, Flannery's Geo Pub and Shamrock Bar.  They each had their own celebrations!

Special thanks to Elaine Shanahan of Wild Geese Chile for sharing this report with us. You can follow her group on Facebook by looking for The Wild Geese Expat Association in Chile. The photos in this report are courtesy of Cat Allen of EyeSpyCat with the exception of the picture of the Sanctuary Statue taken by Damien Keohan of Fiddler's Irish Bar.