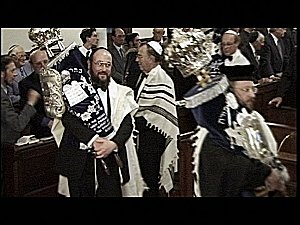 Shalom Ireland," director Valerie Lapin Ganley's documentary about Ireland's small but vibrant Jewish community, manages to convey a huge amount of information about the past, present, and future of Ireland's Jewry, a community whose existence takes many by surprise. The film, showing in festivals around the U.S. in the coming months, creates a memorable, lyrical portrait of a people at a crossroads. (Published in 2004)

Even if you don't believe in stereotypes, you're sure to smile at—and perhaps even agree with—a comment jokingly made by Joe Briscoe, a prominent member of the Irish-Jewish community, at the beginning of "Shalom Ireland," a new documentary about the Jews of Ireland.

"My father used to say that Jews have the facility of picking up the best qualities of the wider community in which they lived," says Briscoe, who appears in the film's second scene.

From the outset of "Shalom Ireland," you know this is one film you're bound not only to learn from, but, also, to enjoy. The first scene, filmed in a Dublin pub as patrons mill around and listen to the music of a traditional Irish band, sets the mood. No more than 30 seconds pass when Joe Briscoe appears, sharing his humor and a shy, almost elfin, grin.

In its 57-minute running time, "Shalom Ireland" manages to convey a huge amount of information about the past, present, and rather iffy future of a Jewish community whose very existence takes many by surprise. It does so mostly through interviews with three families—the Briscoes, Morrisons and Nelkins—as well as Dermot Keogh, a history professor at University College Cork.

But what carries the film more than anything else are the personalities of the three families she interviews, all from Dublin and all willing to share their knowledge, joy, and sadness with the filmmaker and, ultimately, the film's viewers.Pacifica, California-based director Valerie Lapin Ganley also includes narration by actor Aidan Kelly, and extensive archival footage, reflecting the research and effort that went into making her film. There's also the soundtrack -- traditional Irish music, klezmer music, and a fusion of the two, lending the film a buoyancy at times and a sadness at others. The music comes from two Northern California bands, Driving with Fergus and the Freilachmakers Klezmer String Band, who teamed especially for "Shalom Ireland."

Whether through luck, hard work or some magical combination of the two, Ganley discovered three Irish-Jewish families who appear to have a gift for storytelling. We listen carefully, for instance, whenever Ben or Joe Briscoe discuss the rich history of the country's Jews, including the role played by their father, Robert Briscoe, a member of the Irish parliament from 1927 to 1965 and the Lord Mayor of Dublin in the 1950s and '60s.

We feel the same comfort the filmmaker must have felt when Joe Briscoe, a retired dentist, prepares challah in his own kitchen as he talks about his family and their level of Jewish observance. Joe's brother Ben, appearing less frequently, followed his father into politics, holding his seat in the Dail from 1965 until last year and serving as the Lord Mayor of Dublin in the 1980s.

Joe and Cleo Morrison prove just as warm and welcoming. Joe, who has died since the documentary was filmed in 1998 and 1999, was a volunteer at the Irish Jewish Museum in Dublin's Portobello section and belonged to the choir at the now-defunct Adelaide Road Synagogue, Dublin's oldest shul then. He owned a small business, working as an accountant, and Cleo owned a clothing store.

And, together, they made a great team, as the film demonstrates. We watch with amusement, for instance, as Cleo completes her husband's sentences. Or as Joe Morrison recalls falling in love with Cleo at first sight, informing us how beautiful she "was"—and then quickly correcting himself, saying she still "is." The thinnest of smiles, nearly imperceptible, crosses his wife's lips.

The third family—Carl Nelkin and his American-born wife, Judy Charry—are the youngest of those interviewed and appear near the end of the film, where they discuss the dwindling numbers of Irish Jews. The couple, who seem in their early 30s, talk from the comfort of their own living room, where we watch Nelkin playing with his daughter, Jessica, then a toddler, and where we listen to both parents wonder whether their child might have a future in Ireland.

The three families, along with the professor and narrator, also recount the history of Ireland's Jewish community one that includes their contributions to Ireland, as well as to Israel. The Briscoes tell us about their father, who joined the Irish Republican Army in 1917, ran guns for the IRA and later, during the 1940s, raised money to bring Jewish refugees to Palestine. Others recall the pride among Irish Jews over such figures as Isaac Herzog, the country's first chief rabbi and, later, the chief rabbi of Israel, and his Irish-born son, Chaim, who was later elected president of Israel.

Along with the high points of Irish-Jewish history, the film also explores the low points, including the Limerick Pogrom, which brought beatings, intimidation, and a two-year boycott to the Jews of Limerick in 1904. The film is careful and nuanced in the way it handles the episode, noting that leaders of the city condemned the violence and that it never spread to other parts of Ireland.

Keogh, the historian, also discusses Ireland's poor record, like that of other countries, in admitting Jewish refugees before and during the Holocaust. The country allowed in only 65 to 100 Jews, a footnote that Keogh calls "shameful."

Joe Morrison relates a boyhood story about the 'Black and Tans'

There is a danger any time you rely on the memories of those you interview, rather than a script, to provide historical information, but Ganley shows a deft hand in accurately weaving in the swirl of events leading to the rise of Irish independence.

For example, a friend of this reviewer questioned a story told by Joe Morrison in which Morrison said he was confronted, as 5- or 6-year-old boy, by a soldier in the "Black and Tans," a brutal force recruited by the British to help defeat the Irish revolution. When asked by the soldier "Are you a Republican or a Free Stater?" Morrison recalled, he said "No, I'm a Jew!" and the soldier, laughing, brought him home.

It seemed improbable at first look that a dreaded "Tan" was still in Limerick by the birth of the Irish Free State in January 1922. But extensive research provided by Ganley and WGT's Kieron Punch prove otherwise, as the last of the Black and Tans left Ireland three months later.

All in all, Ganley's film is thorough and captivating—an achievement for any documentary, especially one made by a first-time director.

The last scene of "Shalom Ireland" takes place in the Adelaide Road Synagogue as the shul is deconsecrated. One former chief rabbi, speaking from the pulpit, calls the occasion "the saddest synagogue service I ever attended." Joe Morrison says it represents the end of era.

Referring to the number of Irish Jews, a figure that dwindled from 5,500 in the 1940s to 1,200 when "Shalom Ireland" was filmed, Joe Morrison pronounces his own verdict: that in 50 years, no Jewish community will remain in Ireland. Yes, there are optimists, he adds, but this outcome "is inevitable."

Nelkin, on the other hand, says Jews will never disappear from Ireland. The real question, he adds, is whether the number of Jews "could sustain an organized Jewish community." In text that appears before the final credits, the film notes that the 2002 Irish census actually counted a slight increase in the Jewish population, to a figure of 1,700.

Since the film was made, the conflict between Israel and the Palestinians has also taken a turn for the worse, creating anti-Israel fervor—some would say anti-Semitic fervor—throughout Europe, including Ireland. How those attitudes will affect the future of the Irish-Jewish community is uncertain.

What is certain is this: "Shalom Ireland" makes a strong and memorable case that, as Joe Briscoe says, "the Irish people have benefited from the Jews living among them." Filmgoers, as well as anyone interested in Irish or Jewish history, would benefit from seeing this film.

Doug Chandler is a New York-based journalist whose work focuses on Jewish issues and culture.

For information about upcoming screenings of "Shalom Ireland" around the country or to rent the documentary for a film festival, visit the film's official website, at www.shalomireland.com, or e-mail the director at valerie@shalomireland.com.