It was early Friday afternoon, November 22, 1963. I was a student at the Catholic University of America in northeast Washington, DC. My classes for the day had just finished and I was going to the library to look for a book that I needed for a term paper. I noticed some conversation buzzing in the study carrels, a place usually reserved for quiet. But there was more buzzing than usual. “President Kennedy was shot in Dallas” they said. “He has been taken to the hospital.” It was stunning, surreal for a moment, and then only minutes later “he is dead.” I couldn't believe it -- I didn't want to believe it. My world came crashing down. This president who was our daily inspiration, whose smiling face and positive spirit uplifted millions of Americans and others around the world, was dead.

The bells from the National Shrine basilica on the other side of the campus started to toll. The bells seemed to confirm that it was really true. The president was dead. From all across the campus students converged on the National Shrine where prayers were being said. I walked over and went inside and stayed a while – not sure how long, and then went home to the house where I lived in northwest Washington, DC.

For the next several days all commercial television programming ceased, only non-stop news was broadcast. The classic newsreel clip of Walter Cronkite on CBS, with uncharacteristic emotion in his voice announcing that President Kennedy was dead while removing his glasses, was replayed numerous times and viewed by millions. Most stores on Connecticut Avenue closed and many exchanged their usual window displays for a solemn photo of the president in a black frame or crepe. Friday night the president's body was flown back to Washington, DC and taken to Bethesda Naval Hospital where an autopsy was performed.

The next day Saturday, once the president's body was moved to the East Room of the White House, Kennedy family members, relatives and family friends came to pay their respects as well as a day-long procession of dignitaries, politicians and other government officials. The public would have their chance the next day at the Capitol.

On Saturday evening, television anchormen told the world that there would be a Mass at 10AM the next morning in the East Room for family and invited guests only, after which the president's casket would be moved to the Capitol rotunda for public viewing. Five friends and myself agreed to dress up in our Sunday best and go down to the 15th Street entrance of the White House around 9AM before the Mass would take place and ask if we could go into the East Room to see the casket and pay our respects. It wasn't likely that we would get in but we would give it a try. At the gate, there was a lone Marine guard in his telephone booth-like guardhouse. We asked him for permission to go in. He eyed us up and down and then picked up his telephone. He spoke to someone for a few moments and then stepped out to tell us that we should stay right where we were and that a Marine guard would come out shortly to escort us in.

Within a few minutes the guard appeared and instructed us to follow him inside. We entered the building and walked up a flight of stairs. At the landing we entered the East Room. There was a vinyl runner on the floor from the corner door down the length of the room. The closed wooden flag-draped casket lay there in the very center with two kneelers alongside. There were military guards at attention posted around the room. Our small group took turns kneeling at the casket. On the foot of the casket I noticed a small bronze plate with the name of its maker (which I forget now) and “Boston, Massachusetts” underneath. No one else was in the room – only the guard of honor and ourselves. In a few moments we were finished and our Marine guard escorted us back downstairs and out to the 15th Street gate. It was all like a dream, but it was real.

We had just experienced one of the most memorable moments of our lives! JFK's casket lying in state in the Capitol rotunda

That afternoon the casket was taken to the Capitol rotunda where it lay in state for public viewing. The line waiting to simply walk past the catafalque at a distance grew so long that it was said that some people waited on line all night to get in. 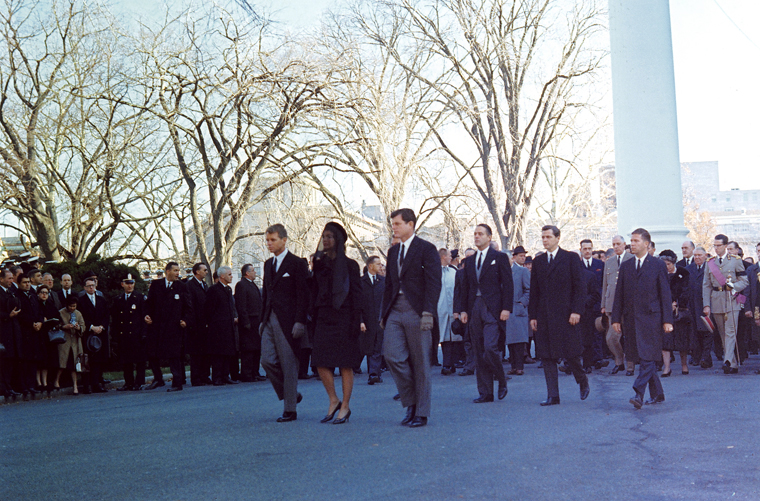 On Monday, I stood on the southeast corner of Rhode Island and Connecticut Avenues. With the crush of the crowd, that was the closest I could get to the front of St. Matthew's Cathedral about 100 yards up the street to my right. A man standing next to me said that he drove all night from Indianapolis to be present. People came from all across the country and from around the world for the funeral of our beloved assassinated President Kennedy.

After waiting for a while on the corner that blustery day, the funeral cortege began to approach. It came up Connecticut and turned right onto Rhode Island. First came the flag-draped casket mounted on a horse-drawn caisson followed by the riderless horse. The funeral party followed behind walking from the White House. In the front row was Jacqueline Kennedy, all in black with a mantilla shrouding her face. At either side were JFK's brothers Bobby and Ted. Behind them came heads of state, leaders, diplomats and personages from half the countries of the world. The ones I could recognize from television were Charles De Gaulle in full military uniform, Willy Brant, the mayor of West Berlin, Prince Phillip and Harold Wilson from Great Britain, and of course Eamon de Valera, the President of Ireland. They were followed by the members of the US congress and scores of other important people. It was an unprecedented gathering of world leaders for one of the saddest times in the history of our country.

The funeral party filed into the cathedral and the doors were closed. I ran up Connecticut Avenue to the house where I was living north of Dupont Circle to watch the Mass on television. It was all so surreal. The president who had been so alive and personable on television almost everyday, all of a sudden was dead. How could this be? I was distraught.

After the Mass, I stayed at home and watched the funeral on television as it processed from St. Matthew's back down Connecticut Ave and out to Arlington National Cemetery. President Kennedy had been there two weeks earlier on Veterans Day and commented that the view of Washington from the front of the Lee Mansion on top of the hill was spectacular. Little did he know that only two weeks later he would be buried on the hillside just below this spot.

The graveside prayers were conducted by Cardinal Richard Cushing of Boston with the Kennedy family and dignitaries up front. An Irish honor guard of 26 Defense Forces cadets whom President Kennedy had seen at Arbour Hill Military Cemetery in Dublin the previous June on his trip to Ireland was commissioned to perform its drill at his graveside rites. To read about them, click here. For weeks afterward the crowds were so large at Arlington visiting JFK's grave that I decided to wait a while before going out there. Finally I did go on Christmas morning, a month later, getting to the cemetery at 6 AM. Even at that early hour the line was so long that I stood waiting for more than 3 hours to get up to the grave.

To see some rare photos of the Kennedy funeral, including the first one in which Eamon de Valera appears, click here.

Postscript: The man to de Valera's right is Fr. Donald O'Callaghan, a Carmelite priest who accompanied de Valera as his chaplain that day. Father O'Callaghan and de Valera were great friends for many years.

Very poignant for me, Jim. I was 10 years old at this time, and not particularly aware of the particulars of the president's waks and funeral. I find myself welling up reading this -- it's startling to realize how one man's act can change the course of so many lives.

Next week, we will take a more pronounced look at JFK and the Irish in our pages here, and this kicks that effort off nicely. Go raibh maith agat!

Great piece, Jim.  Thanks for sharing it.

How well I remember the event. I was stationed on board the USS Hunley (AS-31) at a US Navy Submarine base in Holy Loch, Scotland. It was only 2 days before my 19th birthday and I had been only on the ship for less than a month. What really impressed me at the time was how much love the Scottish locals gave us yanks and their outpouring of condolences.....What a 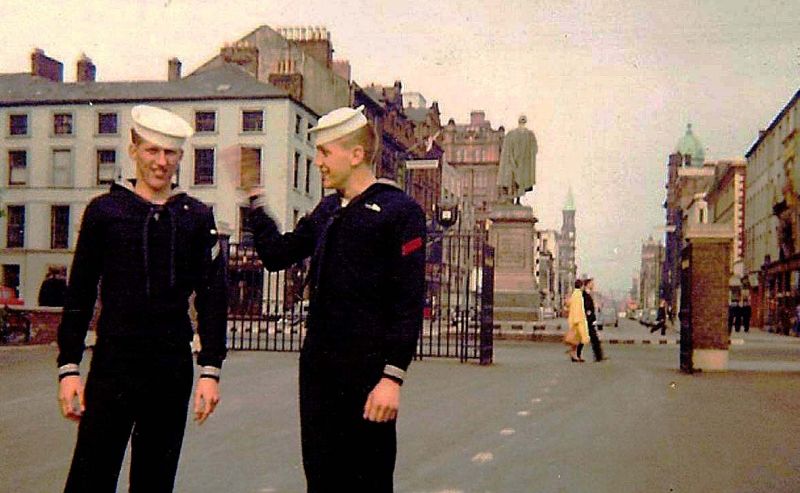 sad time in our history.

Was a babe in arms at the time.  Grew up with a lot of boys named John F though.

Lance, what is the setting for this photo? And which is you?

I was a senior in High School .. we'd just arrived back in homeroom preparing for dismissal at 2:30.  The person sitting behind me poked me in the back with a pencil.  I turned around .. he whispered, "President Kennedy was shot".  No more was said.  The bell rang .. we went to our lockers .. then proceeded outside into the bright sunshine and cold, windy weather .. met up with friends outside the door .. we piled into someone's car and listened to the news on the car radio.  President Kennedy was dead. Numbness.