The Premier County - Tipperary at a Glance In our blog post last week, we mentioned some of the main attractions that you must see if you ever visit Waterford. This week we are having a look at their neighbouring county, Tipperary.

Cahir Castle is one of the largest castles in Ireland, and probably the best preserved. It is sited on an island in the river Suir. It was built in 1142 by Conor O'Brien, Prince of Thomond. The powerful Anglo-Norman family, the Butlers, came into the possession of the castle in 1375. The castle was captured three times in its history: it fell to Devereux, Earl of Essex, in 1599 after it had been battered for three days with artillery; it surrendered without a fight to Inchiquin in 1647; and again to Cromwell in 1650.  Over the centuries the Butlers considerably rebuilt and extended their stronghold. However, by 1599, the castle had reached its present appearance, with the only subsequent alterations taking place in the 1840s. In 1961, the last Lord Cahir died and the castle reverted to the State. The castle retains its impressive keep, tower and much of its original defensive structure. Today, the castle also features an excellent audio-visual show which informs visitors about its eventful history. 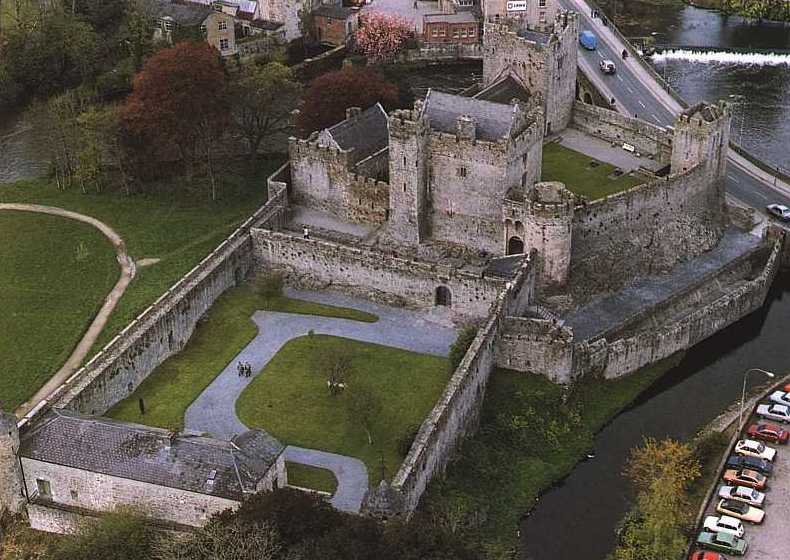 Situated just outside Cahir, in the small town of Clogheen is the Swiss Cottage. The Swiss Cottage is a beautiful ‘cottage orné’ built in the early 1800s by Richard Butler, the first Earl of Glengall, to a design by the famous Regency architect John Nash. Its interior contains a graceful spiral staircase and some elegantly decorated rooms. The wallpaper in the Salon manufactured by the Dufour factory is one of the first commercially produced Parisian wallpapers. It is situated on an elevated site with access by stone steps. The cottage was in a state of disrepair up to about 20 years ago, but was then taken in charge by the state and fully refurbished to its original specifications. The house is inspired by nature and this is evident in such things as the curving thached roof, the external woodwork resembling branched trees, and the natural themes on the wallpaper and other internal furnishings. The Rock of castle is the most visited heritage site in Ireland and it is one of our most recognisable landmarks. The ‘Rock’ is actually not a castle, but a church, which is a common misconception. The Rock of Cashel, more formally St. Patrick's Rock, it is also known as Cashel of the Kings. Reputedly the site of the conversion of Aenghus the King of Munster by St. Patrick in the 5th century AD. Long before the Norman invasion The Rock of Cashel was the seat of the High Kings of Munster, although there is little structural evidence of their time here. Most of the buildings on the current site date from the 12th and 13th centuries when the rock was gifted to the Church. The buildings represent both Hiberno-Romanseque and Germanic influences in their architecture. The complex has a character of its own, unique and native, and is one of the most remarkable collections of Celtic art and medieval architecture to be found anywhere in Europe. It is a must see if you are ever  in the model county.

Lough Derg is the largest lake on the River Shannon. Its 13,000 hectares stretch 35 km from Portumna at its northern tip to Killaloe/Ballina at the most southerly POINT, and 12 km at its widest point, from Scarriff on the western shore to Youghal Bay on the eastern side. The lake is also very accessible by several slipways and there are many sheltered harbours and marinas dotted around its shores. Lough Derg is navigable over its total length of just under 40 kms, from Portumna at its northern tip to Killaloe and Ballina in the south, and also has access to over 200 kms of navigable inland waterways. Lough Derg is a wonderful amenity and aptly named Ireland’s pleasure lake. The range of activities is stunning. Days can be spent cruising, fishing, cycling, walking or relaxing by the lakes shores. For the watersport enthusiast the facilities are world-class. Good sailing breezes ensure topclass conditions for sailing and windsurfing. There is something here for everyone

Michelstown Caves were discovered in 1833 when a farm labourer called Michael Condon was quarrying limestone and dropped his crowbar into a cavern. On the 13th September 1875 Timothy Mulcahy became the owner of the farm on which the cave is situated. Mr Mulcahy took a keen interest in the preservation of the cave. Fortunately the cave has remained in the family ever since. Major work was started in the cave in 1969. Electricity was installed in 1972 making it the first cave in Ireland to have an electric lighting system. The result is a wonderland of muted colour. The cave is now open daily throughout the year and the temperature remains constantly at 54 Fahrenheit. Mitchelstown Caves are located in county Tipperary 12 kilometres east of Mitchelstown. The tours are approximately 2 kilometres in length going through several caverns with examples of different types of formations many of which are given colourful names. The limestone being dissolved by rainwater percolating through the soil and stone is redeposited in the cave as the drops of water evaporate in the air forming stalactites, stalagmites, calcite columns, and flow stones among other examples of formations which are to be seen in the caves. Considering that it takes over a thousand years for a stalagmite or stalactite to grow a few centimetres the formations found in Mitchelstown Caves are highly impressive. Examples of 350 million year old fossils are to be seen as well as some cave fauna. Great history of Tipperary's places of interest.  What about Castle Leake in Cashel, any history of that?

There is no picture of the beautiful Glen of Aherlow or the Galtee mountains or Holy Cross Abbey and a lot more to see in Tipperary.