Most of South Africa is more than 8,000 miles (14,000 km) from Tipperary, a truly “long, long way,” but still, as in Ireland, another former British colony, the tramping of British army boots once was a familiar sound to that nation’s natives and immigrants.

So perhaps it is not so surprising that The Wild Geese family has welcomed to its ranks Rose Maurer, a 'pietermaritzburger,' a native of the South African city of Pietermaritzburg, capital of the nation’s KwaZulu-Natal province. Rose Maurer spoke to the community in WG’s Main Chat Room this past week. Here’s the transcript of the conversation, edited for clarity. And stay tuned for news of regular, ongoing conversations with fellow members, which are open to the entire community. WG

Rose Maurer:  I'm in the Main Room now -- was speed reading your intro.

Gerry Regan:  LOL, good skill to have, Rose, in this fast-paced media environment.:-) BTW, Rose can be reached via WG by accessing her profile page HERE. Rose, how did you find your way to The (New) Wild Geese, all the way from your home in South Africa?

Rose Maurer:   Lost connectivity, Ger, sorry -- back again! I am a born and bred 'pietermaritzburger', but before we lost connection, I was referring to The Blarney Brothers, three Irishmen, who have lived and performed gigs here and in nearby coastal Durban for 30 years. Blarney Brothers - Hannigan's Hooley

Gerry Regan:   How did you find you way to our community here, at The Wild Geese? Thanks for 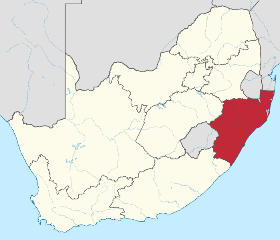 that link, a chara. So I see you live in the capital of KwaZulu-Natal? (right, Wikimedia Commons) . . .  On South Africa's eastern seaboard, facing the Indian Ocean.

Rose Maurer:   Your geography is perfect! It is also known as "The Last Outpost,' referring to the Victorian British buildings -- not very popular in Northern Ireland, me thinks!

Gerry Regan:   Well, some would argue, quite persuasively, that the days of British dominance in Northern Ireland are limited. Clearly, British colonial rule left a troubled legacy in South Africa, as well. But that leads us a bit astray.  How did you find our community here? South Africa is a long way from, let's make a pun, Tipperary.

Rose Maurer:   Apologies for the typos! The whole British Colonialism topic is a troubled one! I found TWG on a link from the Celtic Thunder Official Website -- can't get enough of their CDs and DVDs.

Gerry Regan:   Ah, Celtic Thunder, well, we'll have to thank them later for bringing you into our family here.

Belinda Evangelista:   Is there a big Irish community there?

Gerry Regan:  Yes, tell us about the state of Irish culture in KwaZulu-Natal, Rose, if you would? For example, how many typically turn out to hear The Blarney Brothers perform?

Rose Maurer:   Unfortunately, there is no organised community -- we did have a Scottish Caledonian Association, which has faded, and I have a good Irish friend, Loretta, who came down from Zim [Shipping Services].

Rose Maurer:   Yes, indeed, she is about 62, still has a slight brogue, and the red hair to match! . . . I would say [The Blarney Brothers draw] about 2,000 to 3,000 -- NOTHING like the enormous crowds at overseas gigs, depending on where they are appearing.

Gerry Regan:   That's a very impressive number, I must say. They perform at large venues, it sounds like, including many outdoors, at fairs and the like? … The lads in "The Blarney Brothers" would seem to be a bit 'long in the tooth,' but apparently are still full of energy. Check out their home page HERE.

Rose Maurer:  Yes, they have had a regular venue at one of the hotels in Durban, for years, where the attendance would be smaller, but very often they are at sports stadiums and agricultural-show grounds.

Gerry Regan:   What's perhaps your favorite moment, or song, from one of their concerts? And does Loretta attend these with you?

Gerry Regan:   Yes, or any other concert of Irish music?

Rose Maurer:   Loretta and I met about five years ago, through our husbands, who are BMW [luxury car] fanatics. The Blarney Brothers’ years were mainly in the 60s, and they attracted people of every walk of life -- after rugby games etc. Loretta borrows my Celtic Thunder DVDs and CDs, which I order direct from their home page, at a huge cost, considering the exchange rate – but it’s worth it. I have broadened my interest through WG to Irish history as a whole -- a lot to absorb, dating back to the Druids, or earlier. South Africa was only colonised in 1652 by a Dutchman, Jan van Riebeek -- so we are a new country.

Gerry Regan:  Yes, South Africa is an extraordinary enterprise, on the cusp of prosperity for all. It's an amazing transformation, from apartheid. I was mightily impressed when we visited the Cape provinces in October 2010.

Rose Maurer:  Ger, it really is a rainbow country.  Sadly, we don't have the 'craic' and cozy pub life [found] in Ireland -- 95% year-round sunshine leads to barbecues, which we call a 'braaivleis,' so there's no nipping down to the local.

Gerry Regan:  "Nipping down," LOL, an interesting term, Rose. Rose, have you been to Ireland?

Rose Maurer:  Sadly, no -- I would give anything to tour the island -- my only travelling was 3 weeks

in Cabin John, Maryland, in 1997, when our daughter au-paired there. We had a great 3- day expedition to NY -- fortunately prior to 9/11. [BTW, The Blarney Brothers] certainly have perseverance, and frequently travel overseas. My personal favourite [performances] are 'The Leaving of Liverpool" and "Whiskey in the Jar.”

Gerry Regan:   Do you have a personal "Irish story," or perhaps some Irish ancestry, Rose? Is Maurer your maiden or marriage name? And is it Irish?

Rose Maurer:   Maurer is my married surname (for 44 years!), and is German, but South African after 4 generations. On my father's side, Dutch-Nederlands (SAfrikaans), and my mother: Cornish and Huguenot -- quite a combination. I looked at a genealogy site and found a huge number of Maurers living in Ireland.

Gerry Regan:   Fascinating, Maurers in Ireland, must be a story there ...

Rose Maurer  : Sorry, connectivity is appalling - I do agree, what a combination!

Gerry Regan:   So, Rose, winding down here, for today at least, your affinity with Irish culture is not from ancestry but to the culture, it seems safe to say, and your exposure to it, thousands of miles from Erin's Green shores.

Rose Maurer:   Absolutely correct -- and the more I discover, the more fascinated I am about everything Ireland had overcome (and no doubt still is) overcoming.

Gerry Regan:   Rose, again, we are delighted to have you in our Irish family here. We'll sign off for now, then, and look forward to further exploring with you and others in the community the epic heritage of the Irish ... worldwide. Slan!

Belinda Evangelista:   Can you tell us how to say goodbye in Zulu?

Rose Maurer:   My absolute pleasure and privilege, and in Afrikaans Totsiens!" WG

Rose, I have been to SA twice, once in 1961, with the U.S. Military. We stopped in Cape Town and everyone loved it.  I sailed there in my own sailboat  in 1998.  I sailed into Richards Bay and then all along the coast to Cape Town,. Stopping in Durban, Port Elizabeth, New London and Hout Bay. I love SA and its unusual mix of people,  Afrikann, British, Zulu, Indian and others. I even met some Irish from Dublin. It is a great place and I would love to return someday.

For more information and photos on the history of the Irish in South Afirca check out my "Irish South Afirca" album.