(First publish 11/15/11) Mary Courtney is a Kerry-born folk artist and New York resident, and she is lead singer, guitarist and bodhran player for Morning Star [pictured below], a traditional Irish band that regularly travels between shows in the United States and Ireland.  Her music incorporates traditional Irish folk sound with a progressive social conscience born out of a political education in the States. Courtney has used her music to spread Irish culture and to educate Irish and non-Irish alike about the struggles of the Irish people.

TheWildGeese.com’s Daniel Marrin spoke to Ms. Courtney about her work.

TheWildGeese.com: Tell me a bit about music in your family.

Courtney: Well, I grew up in Kerry in the parish of Castlegregory, and both my parents were very musical; both came from musical families.  My father played accordion, my mother sang, and she’s who I learned to sing from. … During the war years in the 1940’s – my parents married in 1940 – when there would be dances, everybody would come. During those times, everyone traveled by bicycle.  There were no cars, except perhaps used by a priest or a doctor. And there’d be stories of people coming to dances from all over the place, from Aughnas Caul and Dingle.

My parents owned a dance hall in the parish of Castlegregory, called the Strand Pavilion and when I was growing up, all our parish events took place in that hall.  Everything from dances to ceilis, church, movies (the local pictures), civil awards, anything, people came from miles around.

When my dad got the application and went ahead and built the Strand Pavilion in the 50s, people at the time thought he was mad [but] it became the center for parish events until the mid-60s probably.

WG: Who were your musical influences growing up?

Courtney: Well, my parents obviously and my uncles and aunts.   I was from a family of six brothers and four sisters – I was the 10th, and my older brothers sang in a ballad group.  So my education came from listening to them, too. 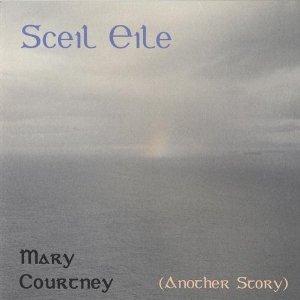 WG: Where did your music get its political influences from?  I’ve seen that you have a number of politically themed songs on your solo album “Sceil Eile” (Another Story), like “Mandela” and “Seeds of Freedom”?

Courtney: I think I got my education about Ireland when I came to this country.  The Irish-Americans in this country are so proud of their heritage, and I found that surprising because we didn’t have that sort of pride in Ireland when I was growing up.  We were also pretty detached from the situation in Northern Ireland.  Even though I had relatives there, we didn’t really know what was going on with all the rioting and trouble that was going on there when I was growing up.

My education about politics and social justice and justice for Northern Ireland came in this country.  I came here in 1982, and I went back in 1986 for my father’s funeral.  After the funeral, I would turn on the television, and I’d say, “Are we getting BBC News?”  My mother would tell me, “No, this is RTE [Irish television].”  But I thought I was listening to an English broadcast, because of their accent and their twist on the news, how very skewed to the British viewpoint it was.

[In the States] here was I listening to the other side, about Northern Ireland, about the injustices that were going on in Northern Ireland.  But you’d never hear that [at home.]  You’d never hear of the violence and of all the organizations trying to mend the fences, of The Red Hand [Loyalist paramilitary groups] or the RUC [Royal Ulster Constabulary] and their collusions with the British army.  There wasn’t a balanced view at home.

WG: You said there wasn’t that same sense of Irish pride in Ireland when you were growing up.

Courtney: I’m not sure if that’s a result of colonialism.  I don’t know. …  But that’s what I felt.  Anyone who sold Easter lilies at Easter, you know, you’d disassociate yourself from them.  If you had any kind of sympathy for the IRA or the Catholic struggle for civil rights in Northern Ireland, you’d be looked down upon.  You didn’t really talk about it too much, either, because the laws at the time made it so you couldn’t really open your mouth too much.  You could get arrested if you expressed your views on Northern Ireland openly.

In any case, I thank my Irish-American community for educating me.

WG: Do you see your music as a platform to advocate? Courtney: Oh, absolutely. Like my song ‘Mandela’ written by Danny Hannon, born from the Bronx up in Highbridge or Kingsbridge.  He was married to a Protestant from Ballycastle [County Antrim].  (laughs) You couldn’t get more of an Orange [spouse] than that, but here he was an Irish-American Catholic.  He ended up going to Northern Ireland and seeing that injustice had no one color, no matter where it existed in the world.

When I heard ‘Mandela,’ I cried.  It told the story so well.  It was the truth, and I’m a very big fan of the truth.  I think if you can educate people, it’s wonderful.  Because I certainly didn’t know a lot of things about my country growing up, and even people are who not Irish should know what’s going on.  Because they may be getting a skewed idea of what happens, or what has happened, over there.  If you can educate through music and song, using them as a forum, then that’s great.

Happy Sunday morning, Mary, in a few hours time for you!

Thank you for a most insightful Q&A interview, The resemblance between the lack of awareness of the lengthy Northern Ireland struggle bears an uncanny likeness to the South African struggle against apartheid. I was born in 1947, and grew up in a happy, upper middle class family, with both of my parents having migrated from farms      to Pietermaritzburg, and both being fully fluent in isiZulu - the predominant Black mother tongue in our Province.

Although my late father, an Advocate (Barrister) was valiantly supporting a (Protestant) family of five daughters - hoping for a son, I suspect, and was a liberated man (for the time) it was only in the late 1960s that 'thinking' citizens began to realise that the Government of the day had deliberately arranged an inferior education for Black pupils, and resolutely followed the horrendous policy of separate development etc since coming to power in the late 1940s. 'White' South Africans had been subjected to a State 'whitewashed' media system - Newspapers and radio - TV was only introduced in 1975!

The point I am making, is that at that stage, most South Africans were kept in a state of politically slanted ignorance. Your closing paragraph expresses my feelings exactly, and there is no-one in my country who does not respect and love former President Mandela (affectionately called 'Madiba') who freed our Rainbow Nation, although he is very frail now, in his 90s. Thanks to him and his complete absence of bitterness at being incarcerated on Robben Island for 27 years, we are in a position to deal with our 'teething' problems, which still exist (ironically between the 9 different Black cultures), despite the iconic freedom of 1994.

In closing, music, song, poetry and drama in South Africa are also providing education and crosscultural meetings of the mind.