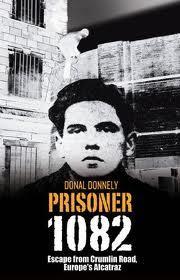 There is something about the ingenuity, romance and perils involved in a prisoner's escape from captivity that often fascinates the general public. Personal accounts of such escapes, ranging from Henri Charriere's "Papillon" to Eric Williams' 'The Wooden Horse', and from Billy Hayes' 'Midnight Express' to Paul Brickhill's "The Great Escape," have entered popular culture and form a subgenre of literature that lies between history and memoir but which also bears the hallmarks of action thriller. "Prisoner 1082: Escape From Crumlin Road, Europe's Alcatraz," which is the autobiographical account of IRA Volunteer Donal Donnelly's little-known escape from Belfast's Crumlin Road prison during the 1956-62 Border Campaign, ranks alongside the finest narratives in this subgenre.

Donal (Danny) Donnelly was born September 8, 1939, to Peter and Margaret Donnelly, and raised in the family home in the 'Gallows Hill' area of Omagh, County Tyrone. He tells us that his family had a strong tradition of militant Republicanism, typified by his granduncle 'Red Mick' Gallagher, who was a member of the IRA Army Council in the 1930s, and to a lesser degree by 'Red Mick's' older sister, Granny Donnelly, who was the proprietor of 'The Tyrone Restaurant' in George's Street, Omagh. It was there, as a small boy, that Donal saw Eamon de Valera and Sean MacBride taking part in Anti-Partition League meetings.

These childhood influences ensured that Donnelly would embrace the Republican movement in his teenage years as he became increasingly aware of the unjust Unionist hegemony in the partitioned Six Counties. The author describes how the embers of latent Republicanism within him were fanned into flame by news of the great arms raids of the early 1950s as the resurgent IRA re-equipped itself, and how inspiration was gleaned from other campaigns against British colonialism, such as the Mau Mau rising in Kenya and the EOKA insurgency in Cyprus.

Before long, Donnelly had joined the IRA and received military training in preparation for the forthcoming campaign from, amongst others, a young Corkman named Dave O'Connell. In the early 1970s that same Cork man, then known as Dáithí Ó Conaill, would play a prominent role in the leadership of the Provisional IRA. As Operation Harvest got underway December 12, 1956, Donnelly came into contact with many of the other southern-based flying column members, one of whom was my uncle, the late Willie Gleeson, who, in December 1958, helped plan and lead the successful escape of 14 IRA Volunteers from the Curragh Internment Camp in County Kildare.

The authorities on both sides of the Irish border countered the initial successes of Operation Harvest by making widespread arrests and introducing internment without trial, which had the effect of cutting the head off the Republican snake. Donnelly's suspected involvement in the destruction of B Special drill halls in County Tyrone resulted in his own arrest and on October 22, 1957, at the age of 18, he was convicted of membership in the IRA. Hoping to make Donnelly an example, Lord Chief Justice MacDermott sentenced him to 10-years imprisonment in Belfast's Crumlin Road Gaol, also known as 'Europe's Alcatraz,' a fortress-like prison built of black basalt in 1846.

Donnelly's description of the three years he spent in Crumlin Road provides a fascinating insight into not only the Northern Ireland prison system, but also the IRA command system within A-Wing, where convicted Republicans were confined. He writes with a lovely turn of phrase and each anecdote concerning the camaraderie, boredom, humour and loneliness of prison life are told with the genial ease of a skilled raconteur.

Of particular interest to historians are his descriptions of the often-petty squabbles among the prison's IRA hierarchy and the divisions between the prisoners from the south and those from the Six Counties. Those divisions would become manifest in the post-campaign recriminations and splits within the IRA that would eventually give birth to the Provisionals and a shift in power within the movement from Dublin to Belfast and Derry. As well, ego-tripping, embarrassment, and blind commitment to protocol would lead to the virtual expungement of Donnelly's escape from the histories of the IRA and the prison itself.

The lack of clear objectives, effective planning and decisive leadership, which Donnelly blames for the gradual collapse of the Border Campaign outside the prison, was also to be found among the Republican leadership within. He recounts how he became increasingly disenchanted with his senior colleagues' unwillingness to mount or authorize an escape attempt, and so with the aid of John Kelly, a native of Belfast, he began to make meticulous preparations for an unofficial breakout.

The escape occurred on St. Stephen's Day, December 26, 1960, when, having used hacksaws to cut through the bars on Kelly's cell window, the two men attempted to scale the prison walls with a rope made from sheets and electric cable. Unfortunately, a tear in the rope at a critical moment saw both men crash down from the 25-foot-high wall. Kelly fell back within the prison but Donnelly fell to freedom.

The author's account of the planning, preparations and the breakout itself is gripping, but it is matched in excitement by Donnelly's attempts to avoid the subsequent manhunt one of the largest ever mounted in the Six Counties. The successful outcome to the escape was only made possible by the assistance of members of the nationalist community, and Donnelly is generous in his praise and thanks to the many valiant people who, at great personal risk, sheltered, fed and clothed him and eventually spirited him to safety across the border.

What is fascinating, and sad, as well, is how Donnelly's escape has never became part of the legacy of dramatic IRA escapes from British lockups. Donnelly tells how the senior IRA leadership would not recognize him as part of the IRA within the gaol because he had inadvertently recognized a British court in an earlier brush with the law.

The same petty squabbles and jealousies also existed in The Curragh, and when my uncle and his 13 comrades escaped from there in 1958, the IRA prison leadership attempted to have them court-martialled because they had not sought official permission from them to escape. Donnelly mentions in the book how, after the Good Friday Agreement, he was finally able to visit the prison and was surprised to find no mention of his escape anywhere in the prison museum. Donnelly told the prison/museum authorities his story and they were happy to rectify the records. The concluding chapters of the book reveal much about the character of Donnelly. They speak of a young man who rejected self-pity and bitterness and instead strove to build a new life for himself in the Irish Republic. The same resourcefulness, perseverance and indomitable spirit that he displayed within Crumlin Road Gaol enabled Donnelly to become a successful businessman, while his sense of justice and innate humanity also made him a champion for workers' rights and the marginalized within Irish society. WGT

Crumlin Road Gaol, or "The Crum," as the locals came to call it, is a stone fortress-like prison in the heart of the Crumlin Road neighborhood of Belfast. It was built of black basalt on 10 acres from 1843 to 1845 to house up to 550 prisoners in individual cells. It is Northern Ireland's last remaining Victorian-era prison structure.

The gaol was designed by Charles Lanyard, modeled after London's Pentonville Prison, where Roger Casement was executed in 1916. 'The Crum' was considered the most secure prison within Northern Ireland and the United Kingdom, and as such was used to intern republican prisoners in the Civil War period (1922-1924), during the 1940s, and in the 1950s during the Border Campaign. From 1966 until the gaol's closing on March 31, 1996, Crumlin Road prison held suspected paramilitary prisoners awaiting trial.

Even with the heavy security in place, there were escapes from the prison over the years, including that of IRA Volunteer Donal Donnelly in 1960. In 1943, prisoners, including then-IRA Chief of Staff Hugh McAteer, and fellow volunteers Patrick Donnelly, and Jimmy Steele, escaped and remained at liberty despite a £3,000 reward offered. Several other escapes by IRA prisoners were carried out in November and December 1971.

Prison authorities believed Crumlin Road Gaol was escape-proof, until events proved otherwise. Machine-gun towers were sited at various key locations on the outer walls, and spotlights continuously swept the grounds during the hours of darkness. Adding to the difficulty facing escaping republican prisoners was the prison's location in a Unionist neighborhood in the heart of a then-largely Protestant city. As well, literally thousands of heavily armed RUC and B-Specials could be quickly mobilized for a manhunt.

Some of the well-known persons held in the gaol include Éamon de Valera, Loyalist killer Michael Stone, and the Rev. Ian Paisley. Additional restoration of the gaol, designed to further its use as a museum, is now underway. WGT

Thoroughly enjoyed Kieron's review. Reminded me of the excellent lecture Danny Donnelly gave 3 yrs ago at the annual Fergal O'Hanlon Memorial Lecture in Monaghan. My father Vincent Conlon was a comrade of Willie Gleeson in the Curragh. They were considered 'young turks' keen to escape, this action frowned upon by the IRA leadership. Nonetheless, their dauntless spirit would not be suppressed.

Thanks for the excellent review Kieron. Here's two extracts from my memoir " Against the Wind" in support of what you wrote.

" And then on 2 December, a mass breakout occurred with sixteen men breaking free....fourteen making a completely successful escape.... This ' unofficial' escape was a spectacular success, and it boosted morale greatly amongst our group on the outside." (p 156)

" Most of the active men had considerable talents and would go on to use them in large companies and government service positions in many parts of the world including Australia and the US....regarded by their recruiters as people who would show initiative and leadership.... Once on being asked by a senior manager where I ' had learned my team-building skills,' I replied tongue-in-cheek, " In the army in Ireland." ( p 163/164)