March is traditionally known as Irish Heritage month and this is highlighted on March 17th. with large parades in many towns and cities around the world. The parades are held in honor of a unique individual named Patricius, a Roman Briton, taken with his two sisters as hostages to Ireland by one of Ireland's greatest warrior kings, Niall Noígíallach who became known as Niall of the Nine Hostages, during raids in Britain and France in the 5th century AD.

“Could I have come to Ireland without thought of God, merely in my own interest? Who was it made me come? For here I am a prisoner of the Spirit so that I may not see any of my family. Can it be out of the kindness of my heart that I carry out such a labor of mercy on a people who once captured me when they wrecked my father's house and carried off his servants? For by descent I was a freeman, born of a Decurion father; yet I have sold this nobility of mine, I am not ashamed, nor do I regret that it might have meant some advantage to others. In short, I am a slave in Christ to this faraway people for the indescribable glory of everlasting life which is in Jesus Christ our Lord." 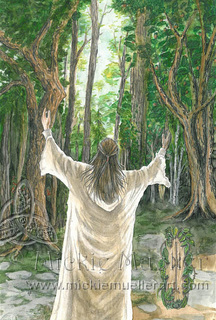 Above, Patricius, from his letter to the soldiers of Croticus.

In 403 AD, Patricius (Patrick) a young Roman boy of sixteen was taken hostage, together with his sisters Lupida and Darerca, by a raiding Celtic army led by the Irish warrior king Niall. Following a series of raids throughout Alba (Scotland) and Britain, Niall’s army, together with their hostages, crossed the English Channel and proceeded to Brittany in France where they fought with a tribe called the Morini. In France, Patricius became separated from his sisters and was brought to Ireland by the returning army. He was sold to a wealthy chieftain/druid named Milchu and traveled north to the province of Ulster where he became a sheep-herder on the slopes of Slemish, an extinct volcanic mountain in County Antrim. By his own account, for six years he lived a lonely life and wrote about his experiences later, in two letters that have survived. After his years in captivity, he managed to escape and traveled across country to Killala bay, County Mayo where he boarded a ship bound for Britain and eventually re-united with his family. Patricius was born a citizen of the Roman Empire in 387 AD. His father Calpornius, was a deacon, his mother was a sister of Martin, the bishop of Tours in France, his grandfather Potitus, was a priest. Religion was in his blood and soon after his return to his family he was sent to Auxerre, France to study religion and theology. It is known that he spent several years at Marmoutier Abbey in Tours, France and was eventually ordained as a bishop by Germanus of Auxerre at Lérins Abbey. At his own request, Patricius was sent to Ireland in approximately 430 AD shortly after his appointment as a missionary, by Pope Celestine. Christianity, it is widely believed, had already taken a foothold in Ireland long before Patricius arrived. A tribe named the Attacotti are believed to have settled in the province of Leinster after arriving from Roman Gaul where, it is thought that they may have served in the Roman military in the mid-to-late 300s. They would have been exposed to early Christianity which was already making inroads in that region of France. A monk called Ciaran (the elder) had preached it in the late 4th Century AD and was the first bishop of Ossory (Kilkenny.) Pope Celestine, had sent a Bishop named Palladius to Ireland to minister to any that were already Christianized by that time, and had some success. Patricius, when he arrived, would have had many contacts already Christianized from which he could draw on for support. Coupled with the financial backing of the wealthy church of Rome, all made it unlikely that he would fail in his mission. During his six years as sheep herder in County Antrim, Patricius acquired a good knowledge of the Celtic language and a broad understanding of local customs, all of which would be a great benefit to him during his mission of conversion. After several years of missionary work among the Morini people in France, Patricius eventually set sail for Ireland. Failing to land in County Wicklow, due to the hostility of the local population, Patricius and his followers sailed up the east coast and landed at a small island off the coast of Skerries, Dublin. After a short respite, they continued to sail north and landed safely at the mouth of Strangford Lough, near to the modern-day town of Downpatrick. A local Chieftain named Dichu gave him a small piece of land in the townland of Saul, near Strangford Lough in County Down on which Patricius built his first shrine. At the Feis of Tara in 431 AD, he met with the high king Laoghaire, the son of Niall who had taken him hostage many years earlier. He is credited with the conversion of Laoghaire from Paganism to Christianity making Laoghaire the first Christian king of Ireland.

As for banishing snakes, Patrick never did. Due to its climate, snakes were not native to Ireland. It is believed that references to snakes were meant as a metaphor for the two-legged variety.

Patrick did however use the shamrock as a symbol of the Trinity.

To read the complete story please click the link below:

From :Out of the Ice: Ireland Then and Now."