MV Kerlogue at War: Serving Neither King Nor Fuehrer, But Humanity: PART 2 OF A 2-PART SERIES 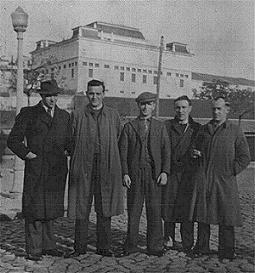 By Marie-Claire McGann
Special to TheWildGeese.com

Sixty years ago this month, the 11-man crew of this Irish cargo ship braved tempestuous seas and possible RAF attack to save 168 German sailors from drowning. Her experience was emblematic of the Irish merchant fleet's intrepid service to the Irish nation and to mankind.

At 11am the Kerlogue reached a truly 'appalling scene', the aftermath of a naval battle. A large destroyer, the 2,688-ton Z27, and two 1,318-ton torpedo boats had been sunk; more than 700 men. The sea all around was littered with flotsam, corpses in life jackets and desperate men on rafts or clinging to wreckage.

Chief officer Valencie of the Kerlogue paints the scene best: "As rafts rose into view on the crests of the giant waves we could see men on them and others clinging to their sides. At first we did not know whether they were allied or axis until somebody noticed the long ribbons trailing downwards from behind a seaman's cap which denoted they were German Navy men."

"For at least ten solid hours until well after the light gave up on them the crew from the Kerlogue pulled men unto their boat. Bearing in mind the size of the Irish ship being a mere 142 feet long and a third of the size of her peers it is a remarkable feat of achievement for her to have saved 168 men (later 164 to arrive in Ireland as four died on board.) There was no doctor on board but the crew of the Kerlogue gave the men first aid treatment to the best of their ability. Frank Forde, in his book 'the Long Watch' notes that: "…Cabins, storerooms and alleyways were soon packed with shivering, soaked and sodden men; others were placed in the engine room where it became so crowded that Chief engineer Eric Giggins could not move around to attend his machinery, and so by signs - as none spoke English - he got the survivors to move the instruments he could not reach…"

Quedenfelt requested that the ship travel to La Rochelle or Brest to land his men, however the Kerlogue refused and headed back to Ireland. A notable factor was that the German Lieutenant-Commander did not force to be landed in France - and he so easily could have done considering the Germans numbers in comparison with the modest number of Irish crewmen.Captain Donohue headed to Cork. He should have gone to Fishguard. Land's End radio in Cornwall was broadcasting instructions to the Kerlogue to go Fishguard. Due to the survivors' bad state of health and few supplies, Cork proved to be the better option, as it was nearer.

The media barely seemed to get hold of the story - the Cork Examiner on Monday 3rd January 1944 printed a small paragraph on the rescue - but it was merely the statement the Government Information Bureau released. The Germans proved very grateful and notable - sending a letter of thanks to the matron of the Cork hospital who cared for the German wounded.

After an exhausting trip the Kerlogue finally made its way back to Dublin on the 5th January 1944. A letter from the German ambassador, Dr. Hempel, was delivered to Captain Donohue in which he expressed his thanks most beautifully:

"…To you and your crew my profound gratitude as well as my high appreciation of unhesitating valiant spirit which has prompted you to perform this exemplary deed, worthy of the great tradition of Irish gallantry and humanity..."

A silver cup was later presented to Captain Donohue with the words 'Bay of Biscay' engraved upon it. The rescued Germans remained at the Curragh Internment Camp until the war was over. Two of them, Petty Officer Helmut Weiss and Lieutenant Braatz, are buried in the German War Cemetery at Glencree, County Wicklow.

(Right: A group of German prisoners at the Curragh Interment Camp.)

During the war, there were never more than 800 men serving on Irish ships. 149 of them lost their lives. Many more were seriously wounded. Few combat units had such a casualty rate. While others were engaged in the business of war, these brightly lit and clearly painted ships plied the sea. They were a reminder of another way of life.

In general, convoys did not stop, for even their own in the water, for fear of being torpedoed themselves. However, these ships, with EIRE and the tricolour, the Kerlogue being one, thankfully did.

Speaking in Seanad Éireann on 27 April 1994, Senator Roche said: My late father was a seaman with the Wexford Steamship Company. He served the nation, like so many young men, through dangerous times in the war years. In every sense he and his colleagues put their lives on the line day after day, in ships which today would not be licensed to go on the high seas, to bring supplies to this nation. Many of his colleagues and friends and many people from Wexford and around the coast paid the ultimate price in serving this nation by losing their lives. The ships were so rickety, old and derelict that we would not go to sea in them today. Yet, these brave, perhaps foolhardy, men crossed the Atlantic, went to the Mediterranean and North African coast and kept Ireland supplied with vital provisions. My father's ship, the Kerlogue, was involved in one of the great rescues of the war. One of the proudest possessions I have is a decoration awarded to him and other members of the crew for rescuing German sailors in the Bay of Biscay in December 1943, when they hauled hundreds of young men from the water and carried them, under threat from the RAF and the Royal Navy, to safety in Cork."

To commemorate this rescue, on 27th May 1994, six German Naval ships visited Dun Laoghaire. There was a ceremony in the Old Mariners' Church attended by President Mary Robinson. Later some of the German survivors presented Richard Roche, member of the crew of the Kerlogue, with a painting of the rescue.

Part 1: IN THE CROSSHAIRS

Marie-Claire McGann was awarded a B.A. (honours) degree in History and Classics by University College Dublin, in December 2003. She is a member of the Maritime Institute of Ireland.

This page was produced by Gerry Regan, with research assistance from Clem McGann and WGT UK Correspondent Kieron Punch.

Roskill, S.W. "The War At Sea 1939-1945" (The official British government history of the naval war, part of the "History of the Second World War")

A Brief History of the RAF's 307 Polish Squadron

This page was produced by Gerry Regan, with research assistance from Clem McGann and WGT UK Correspondent Kieron Punch.

Copyright © 2004 GAR Media LLC. This article may not be resold, reprinted, or redistributed without prior permission from the author. Direct questions about permissions to permissions@garmedia.com