Oh dear, it’s been such a long time since I wrote anything for The Wild Geese … I didn’t realise how long until I re-entered the site. Why? I moved house (or 'flitted' as we call it in Northern Ireland). I moved to a house that looked great on viewing but proved otherwise when we got in. With all the furniture removed and no one there, the extent of what needed to be done swiftly became all too clear. Argh!

There was just SO much to do … cleaning (a VERY BIG job) … painting (every room in the house) … sorting out the heating system, electrics, internet, etc etc etc. Nothing, it seemed, worked properly. And the garden was so overgrown it took weeks to clear. Not to mention the pond … the pond that we didn’t even know was there until we pulled away years of ivy and weeds, revealing a colony of frogs and much more. I won’t bore you with all the gory details. Suffice it to say we’re three quarters of the way there. My husband lost a stone in the process, and I nearly lost my marbles. Not only did I have all this work to do in London, but, at the same time, I had to travel back and forward to Northern Ireland to keep an eye on my ageing parents. Still … we made the house ours in the end, and now we just love coming home to it.

Most surprising of all, I somehow managed to complete another novel in the process. I’ve no idea how … I suppose sitting at the computer (once we got it working) took my mind of all the chaos around us. 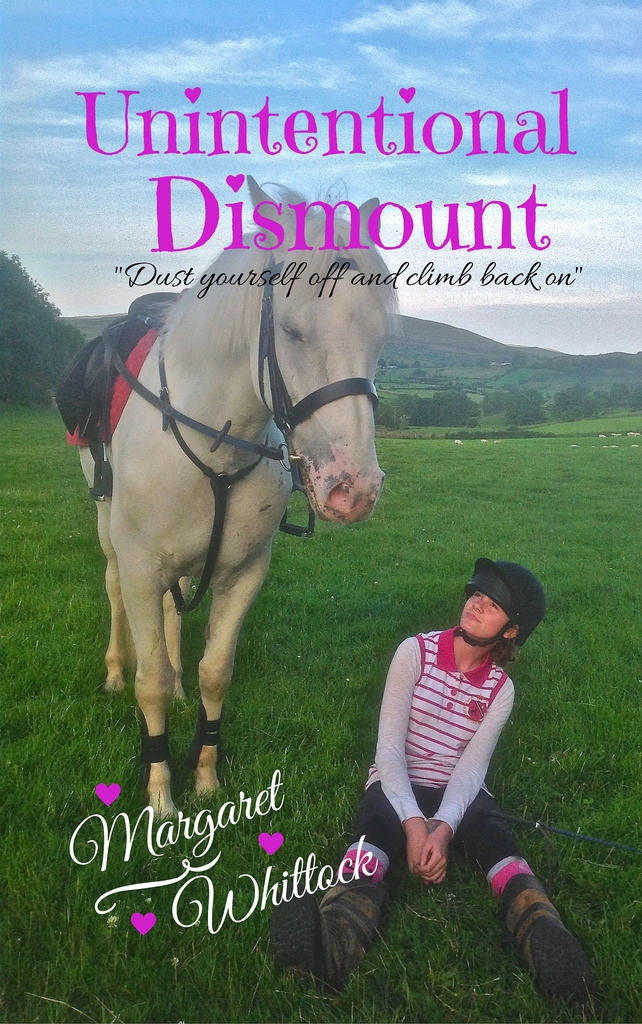 This time, I've ventured into the Young Adult genre, a big departure from my other two novels, Ghost of Gallipoli and Blood Sisters. My new book is named Unintentional Dismount, the term riders use when they’re unfortunate enough to fall off their mounts. The advice then is to ‘dust yourself off and get back on.”  Until about five years ago I knew nothing about horses. Then my granddaughter acquired one. Since that time there have been two more. But my favourite has always been Blue, a grey cob with attitude. I’d have liked to have him on the cover of my new book, but unfortunately he was in box-rest at the time. However, feisty Blue was the partial inspiration for Unintentional Dismount, coupled with the fact that Northern Ireland has recently upped its status in terms of the TV and film industry. To find out more, though, you’ll have to read the book! It’s currently available to download as an ebook from all Amazon sites, and will be out in paperback any day now. The novel is aimed at young teens, both boys and girls. But, I suspect it will appeal more to the latter. And, to those who love and understand horses. The book is set in Northern Ireland and, of course, has a Northern Irish author. An author who can now muck out stables, groom a horse, mix horse food, and stuff hay nets … well, if you’re going to write about something you’ve got to know how to do it.

Now, with the end almost in sight on the DIY front, it’s back to writing full blast. I’m working on the follow up to Ghost of Gallipoli … Billy Blitz. While the former was based on the story of my great uncles at Gallipoli, Billy Blitz was inspired by my father’s experiences as a youth in London during World War Two. And, on the stories of the many children and young people who arrived in the UK and Ireland via Kindertransport. I’m just about half way through this novel, but there’s still a lot of research to do. Most of it, to date, has been both fascinating and enjoyable, particularly that relating to Belfast post-WW2. So here’s hoping that Billy Blitz will make it into the public domain sometime in 2016. Fingers crossed. Meanwhile, Ghost of Gallipoli went on offer, on Amazon UK, on Remembrance Sunday, on 8th November. If you have any younger readers in the family, particularly if they’re horse lovers, please introduce them to Unintentional Dismount.

Early in the New Year I hope to make public the first chapter of Billy Blitz, just to whet the appetite. Until then, it’s back to the keyboard … and to the paintbrush. Oh no … please, not that …

You can discover more about my work on my website: http://www.darkmournepress.com

Ghost of Gallipoli will be on offer on 5th Nov @ http://www.amazon.co.uk/Ghost-Gallipoli-Margaret-Whittock-ebook/dp/...