Mary Brady: Angel of the Battlefield There are perhaps no participants in war who see more of the agony and despair that it brings to humanity than the doctors and nurses who tend to its physically and mentally broken combatants. During the American Civil War, many women with no medical background took up the usually thankless and horrific job of tending to these often-maimed warriors. One of them was Irish-born Mary Brady.

(Left: A woman attended to wounded in a Civil War field hospital -- note, this is not Mary Brady.)

Mary was born in Ireland in 1821 and married her husband, Edward Brady, in Manchester, England, in 1846. They immigrated to the United States in 1849 and he became a prominent attorney in Philadelphia, Pennsylvania.

In the spring of 1862, when some 3,000 sick and wounded from McClellan's Peninsula Campaign began to stream into Satterlee Military Hospital in west Philadelphia (below), Mary and some friends of hers wanted to do something to help these suffering men. Thus she became one of the founders of the Ladies Association for Soldiers Relief in July and was elected its president. They began to visit the sick and wounded soldiers in the hospital. They would bring the patients food, clothing, books, etc., but also read to them or write letters and sometimes just give them a bit of female companionship, occasionally in their final moments. But some of them also began to help change dressing and other tasks to help the medical staff. A soldier she treated later wrote to her saying, "You are engaged in a good work in visiting the afflicted, and by contributing to their wants; and surely you will reap your reward in good season, and God will bless you. Every true soldier you have helped shall remember you with respect and gratitude. I shall always remember you myself with deep feelings of gratitude, and I shall never forget the kindness bestowed on me by the ladies. " 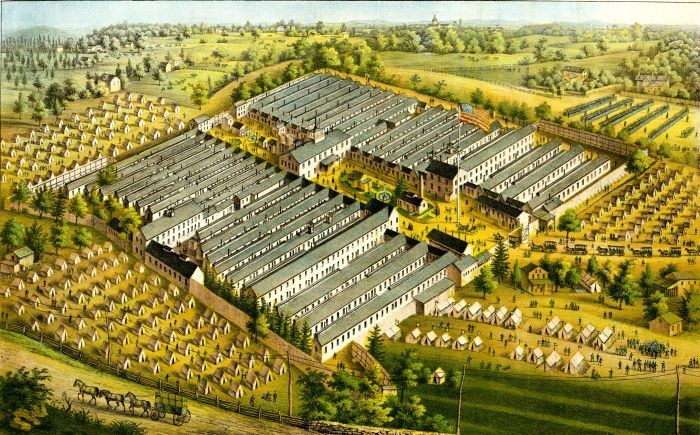 Brady was 40 years old when she began this philanthropic work. She was also the mother of five children, so she was living a full life. Mary was an ardent supporter of the Union, and worked tirelessly to get the organization running smoothly. When that was accomplished, she wanted to do more than just help the soldiers in Philadelphia. From all over Pennsylvania, huge amount of supplies had been collected, more than was needed in the hospital, so in December 1862, Brady traveled to the seat of the war to distribute them there.

At first she visited the troops in some of the 40 military hospitals around Washington, but then she traveled to the Army of the Potomac in Falmouth, Virginia. There she brought assistance to the thousands of victims of Burnside's recent debacle at Fredericksburg, one of the most demoralizing defeats that army every suffered. She got close enough to the front to hear rebel drums in their camps and the church bells ringing on the other side of the Rappahannock in Fredericksburg. 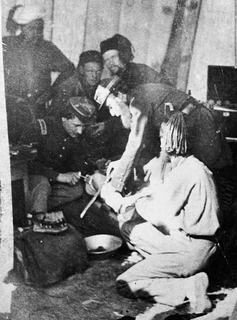 Between 1862 and 1864 she made five such visits to the army. In the summer of 1863, however, the war came to her in Pennsylvania. After the momentous battle at Gettysburg, Mary came quickly to help the massive numbers of wounded and maimed. There, she said, "We shortly found ourselves rubbing away the pain from mutilated limbs, and bathing the feet of others, speaking cheerful words to them all, which later we believed to do good like a medicine. In the daytime we cook and fill requisitions for all sorts of things, and personally distribute our miscellaneous stores to the men with our own hands, conversing cheerfully with the patients. Thus we spend our days as well as our nights."

Mary stayed there in Gettysburg into August and then returned home. One day while riding a street car in Philadelphia, she met a young veteran with one arm. "Mrs. Brady?" said the teary eyed soldier, "don't you remember the day you held my hand while the doctors cut my arm off? You told me to put my trust in God, and that I should get well over it. You said I was sure to recover, and here I am, dear madam, thank God."

(Right: An amputation at a Civil War field hospital.)

Her work was greatly appreciated by all the soldiers she served. During her visits to the field, she had numerous gifts presented to her by the grateful soldiers of the Army of the Potomac. These included a Confederate officer's sword and general's insignia which was given to her at Gettysburg. Brady's efforts were also recognized by Pennsylvania's wartime governor, Andrew G. Curtin, who issued an official message of thanks to her.

In early 1864, Mary made her final visit to Virginia. Two years of exhausting work at the front and at home now began to take a toll on her own health. In mid-February, she returned home suffering from a heart ailment. Her prodigious exertions for the Union and the harsh conditions she endured during her stays with the Army caused her health to fail. On May 27, 1864, she died at the age of 42, of, "disease of the heart, contracted by her voluntary efforts on behalf of the sick and wounded." Hundreds of active and discharged soldiers and local officials attended her burial at Mount Moriah Cemetery. 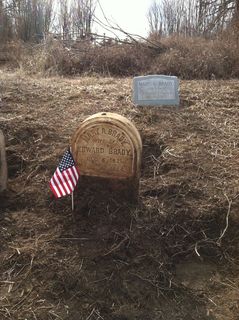 Mary's service to our country has not been forgotten. In 1997, a commemoration for Brady was organized by the 28th Pennsylvania Historical Society. Wreaths were laid at the gravestone, along with a Grand Army of the Republic marker and flag. Music was provided at the graveside by the Libby Prison Minstrels of the Mifflin Guard. In addition to the 28th Pennsylvania, reenactors from the 69th Pennsylvania, the 12th New Jersey, and 61st New York were present at the ceremony.

(Left: Mary Brady's modern stone in the background and her original stone in the foreground. From the Friends of Mount Moriah Cemetery website.)

The stone where they laid those wreaths was a modern one. It was thought that she'd been buried without a stone in 1864. But in April 2015, while doing their spring clean up of the cemetery, the Friends of Mount Moriah Cemetery discovered her original stone, along with that of her husband, Edward and one for their children, buried just below her modern stone on a hillside there. These original stones are all now reset -- a final honor for this brave Irish-American woman.

The Friends Of Mount Moriah Cemetery