Marching the Queen's Highway: Battling 'The Pagans,' Part 1 of 2 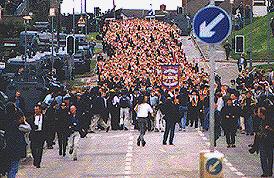 Being on the twelfth day of July, eighteen and forty-nine,
The pagans of this country did together combine,
To shoot and slay our Orangemen up on that glorious day;
They did encamp at thousands great, at a place called Dolly's Brae ...
The battle it raged loud and keen along the mountain side,
To save ourselves, as best we could, our ranks we opened wide;
The volleys from the rebel guns had no effect at all,
For not a man among our ranks fell by a Papish ball.

So now my song I mean to end, my pen I will throw down,
I say success to every man who supports the British Crown,
And generation yet unborn shall sing this loyal lay,
And speak of those that beat their foes at famous Dolly's Brae.

Most people today have become aware of the Orange Order through their activities in Drumcree, a small village near Portadown in County Armagh in Ireland. Less is known, however, about their origins or history. The Orange Order is an exclusively Protestant organization, which desires to maintain the political union with Britain and keep Northern Ireland British. Since 1996, Orange lodges in Portadown have staged a sit-in in Drumcree, ostensibly over their right to march each July along the nearby Garvaghy Road (a road lived in by Catholics). Orangemen commemorate July 12th each year because it is the anniversary of the Battle of the Boyne

in 1690, when the Protestant king, William of Orange, defeated the Catholic King James II and thus secured his position as king of Britain and Ireland. For members of the Orange Order, therefore, and for unionists in general, July 12th marks a historic victory of Protestantism over Catholicism.

July 12th marches are only a small part of a larger number of parades in what has come to be known as the marching season in Northern Ireland. The marching season lasts from Easter until September. The Orange Order justifies the processions by claiming that they are an important way of celebrating their Protestant—and British—identity. At the same time, they deny the sectarian and political nature of the day. One Orange Order website, for example, describes the parades as "a colourful cultural tradition" which are 'neither triumphalist nor sectarian—instead we see them as the legitimate expression of the cultural expression of the Orange tradition in Northern Ireland'. (Orange Marches Website)

Clearly, the Orange Order lays a great emphasis on the idea of tradition and longevity. They claim that the Garvaghy Road in Drumcree is the traditional route along which their ancestors marched. This viewpoint has been widely accepted within the British media and by supporters of Unionism elsewhere. For example, the Irish historian, Ruth Dudley Edwards, writing in the British press in July 1997 stated "To the Garvaghy countrymen, Garvaghy was the road where their fathers and forefathers walked ... if they do not march now, another portion of their country will be gone for ever." But these interpretations are historically inaccurate and politically motivated. The Garvaghy Road was chosen as a route only in 1985. And this road, like the route that preceded it, is almost exclusively occupied by the nationalist Catholic population.

The Catholic residents of Garvaghy Road are clearly opposed to the annual march down their road. They believe that in choosing this route, the Orange Order is being deliberately offensive and provocative and is infringing on the civil rights of the local nationalist community. To defend their rights, therefore, a Garvaghy Road Residents Committee was formed although the local MP, David Trimble, consistently refused to meet the local residents (he finally did so in April 1999). Peaceful attempts to prevent the Orange Order marching also resulted in violent confrontations, not only between

nationalists and unionists, but also with the police and the army. The violence has spilled over to those not directly involved in the conflict. In March 1999, Protestant loyalists killed the legal representative of the Garvaghy Road Residents Committee, Rosemary Nelson. Her appeals to the RUC for protection had been repeatedly ignored.

To safeguard what the Orange Order believes is their civil right to march down the Garvaghy Road, a radical loyalist group known as "The Spirit of Drumcree" was created. Its founder, Joel Patton, explained that the symbolic significance for Protestants in Northern Ireland of Drumcree was 'not about 800 Orangemen marching down a road. It's about the survival of a culture, of an identity, of a way of life. It's about our ability to still hold on to parts of the country ... They (Northern Protestants) believe intensely that if it's taken away from them there, then there isn't anywhere in Ulster that will be safe. If they're beaten in Portadown, then they believe that they can be beaten anywhere, and that's why I don't think they're about to give in."

Clearly, the stand-off at Drumcree has become a symptom of more deep rooted tensions between the nationalist and unionist communities within Northern Ireland and of the struggle for unionists maintain political supremacy.

Yet the Orange Order argues that the politicization of the marching season and the confrontations that have accompanied it are of recent origin—part of the current round of 'the troubles' that commenced in 1969. But violent, intercommunal conflicts within the north of Ireland are not new. Since its foundation more than 200 years ago, the Orange Order has played a pivotal role in fuelling sectarian divisions.

The Orange Order was founded in County Armagh in 1795 after a sectarian confrontation known as "The Battle of the Diamond," during which more than 30 Catholics were killed. In the years preceding the battle, many of the anti-Catholic penal laws had been removed and some civil rights restored to Catholics. But the Protestant minority viewed these concessions as a threat to their political and economic dominance. These fears were increased after 1791 when a new radical nationalist group was formed known as the United Irishmen. The leader, Wolfe Tone, a Protestant, argued that nationality and not religion should define Irish identity. The United Irishmen wanted an independent Ireland and were willing to use violence in order to break the political connection with Britain. Wolfe Tone, who died in 1798, is regarded as the father of republican nationalism in Ireland.

The Orange Order was able to take advantage of the political insecurity of the Irish Protestants in the 1790s by offering a conservative, separatist alternative to the non- sectarian politics of the United Irishmen. In 1798, during the United Irishmenuprising, members of the Order were used by the British government as a counter-revolutionary force, the government providing them with weapons and ammunition. Even at this stage, the British government viewed the Orange Order as a valuable mechanism for defending their interests in Ireland, especially against the republican challenge. The Orange Order, in turn, viewed themselves not merely as the defenders of Protestantism, but also as a native garrison which was crucial to the survival of Britain's political interest in Ireland. Only three years after their establishment, therefore, the Orange Order viewed itself as the saviour of both Ireland and Britain.

After the failure of the 1798 uprising, the British government forced an Act of Union upon Ireland, which created the United Kingdom. As a consequence, Ireland lost its own parliament in Dublin and instead was represented by the Westminster parliament, in London. However, only Protestants could be members of the British parliament—Catholics not being permitted, until 1829, to stand for election.

Within the Orange Order, religious identity was of paramount importance, membership being limited to Protestants, which initially meant Anglicans. In the two-month period after the Order was formed, 7,000 Catholics were forced out of their homes in County Armagh. From the outset, the Orange Order was dedicated to honoring the "glorious and immortal" memory of William of Orange. Consequently, July 12th, the anniversary of the Battle of the Boyne, was chosen as the key commemoration within the Orange calendar. Yet, William of Orange was an unlikely Protestant icon. Many of his soldiers were Catholic and his campaign in Ireland had the blessing of the Pope. Moreover, William had no lasting interest in Irish politics, but he used the war in Ireland as a means to achieve his wider British and European ambitions. In fact, William visited Ireland reluctantly in 1690 and stayed for only two months, never to return. Yet, for Unionists, the Battle of the Boyne and William of Orange were to become inextricably linked with Protestant identity and loyalty to the British crown.

From the outset, July 12th marches were used by the Orange Order as a visible way of demonstrating their political ascendancy within Ireland. Consequently, they appealed to Protestants who feared the growth in Catholic civil rights. In 1796, marches were held throughout Ulster and in Dublin, and by 1800 Orange lodges had been established throughout Ireland. By 1806, Orangeism had spread to Britain, the first Orange lodge being established in Manchester. It also spread to other parts of the British Empire, including India and Canada. From the outset, July 12th marches were occasions of anti-Catholic violence—the march in 1796 was followed by the "Armagh Outrages," in which 7,000 Catholics in Armagh were forcibly removed from their homes. By the 1820s, many of the marches had become annual occasions of violent sectarian clashes, which worried even the British government. This resulted in an official attempt to ban them in 1824. The ban was ignored and so even more stringent legislation was passed in 1832. However, the Orange Order continued to grow, and a government enquiry in 1835 reported that the Order had successfully infiltrated the army and police force in Ireland and Britain. A number of high ranking officials were also Orangemen, including the Duke of Cumberland, brother of the British king

In 1845, the British government decided to make the marches legal again. This decision coincided with a period of nationalist activity aimed at ending the union with Britain. Protestants in Ireland again felt that they were under threat by the Catholic population and, after 1845, Orange marches resumed, but on a larger scale than ever before.

Many Ulster Protestants viewed the uprising as a further example of the treachery of Irish Catholics. The Orange Order again offered to act as a counter-revolutionary force and asked the British government to supply them with arms for this purpose. But the uprising was over so quickly that their assistance was not required. After the defeat of Young Ireland, the Orange Order again cast itself in the role of defender of British interests in Ireland. They also used the insurrection as an opportunity to reaffirm their loyalty to the British crown by suggesting that the security of the Union depended on their support. WGT

I will be praying tomorrow for all of Ireland.I keep reading about the Orange Order March and I have mixed feelings about all of it. I never lived in Ireland but my family was from Omagh in Northern Ireland and I know it's has seen its share of violence over the years...I was so happy for the last years of Peace for Ireland and I pray it will continue. I enjoyed visiting in 2012 and the whole of Ireland is so awesome. I pray all involved with not change history, appreciate their peace and give their children lessons of how to listen and be compassionate to their fellow countrymen not matter their faith.. God bless Ireland!!