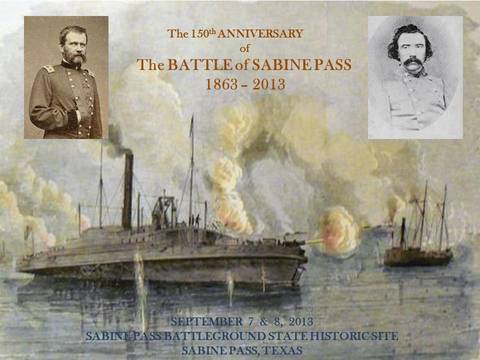 Sunday, September 8th is the sesquicentennial of the Battle of Sabine Pass. The occasion is being celebrated as "Dick Dowling Days."

Though a relatively small engagement, Sabine Pass represented perhaps the finest single day's work of any Irish unit, North or South, in the American Civil War. At Sabine Pass, on the Texas coast near the Louisiana border, Galway native Lt. Richard W. "Dick" Dowling, a Houston saloon keeper, commanded the Jeff Davis Guards, a company of the 1st Texas Heavy Artillery Regiment made up wholly of other Irish immigrants to antebellum Texas. With an amazing display of artillery expertise, Dowling's tiny band of Texas Irishmen -- fewer than 50 in all -- drove off a virtual Union armada carrying about 5,000 Federal infantymen, bent on invading southeastern Texas and marching overland to Houston. The President of the Confederacy hailed Dowling's triumph as the "Thermopylae of the Confederacy."  The Davis Guards received the only medals for valor ever awarded by the Confederate Congress. (These medals were made of large Mexican silver pesos hung from Irish green ribbons, and the few that have survived are virtually priceless.)

Dowling's company saved Houston the fate of Atlanta, and a large granite nomument in a public park in central Houston honors the memory of Dowling and his Davis Guards.

Mike Harrington will join us in the Main Chat Room here at TheWildGeese.com at 5:00 p.m. Eastern Time to discuss the events 150 years ago at Sabine Pass as well as the festivities taking place at the big "Dick Dowling Days."

Che Guevara was a hero.  Period.  I say this as a ferociously patriotic American.  But, alltho I think conservatively on many things, I am liberal when it comes to human rights.  As a former U.S. Marine, I resent that Americans have been denied freedom to travel to Cuba; now for years.  That is not freedom to be denied freedom.  I have heard the dumbest excuses given, mostly to appease the rich Cubans who had stolen all the good Cuban land and commerce for themselves.  My Dad was in the Spanish American war and in Cuba.  I have long wanted to where he was stationed; having that knowledge.  But I have lived in a country that denied this simple freedom to travel.  Like Castro could invade the US.  Like any spies from there couldn't get into the US anytime they wanted.  What baloney they, Congress etc, serve up to the American people and no matter how you slice it---it was all baloney.

Guess it is opening up now, and I am damn  near too old to make the trip.  And Congressmen as they came along did nothing.

The Cubans in Florida like some other minority ethnic groups here are getting all the control they can to continue this charade against Cuba-US relations.  Can you say Rubio etc.

My Dad said the Cubans were just plain wonderful people.  Its always that way.  We love the people and they love us, but our gov'ts have to be at odds or war.   Hopefully more and more common people will become much more assertive, like our movements in the 1960s in the US.  It means get up off of and away from your computers and do something.

Stop that craziness in Clare; home of my O'Briens

Bernard, please post this in the Che Guevara discussion, where it is relevant. This topic is completely irrelevant to that of the American Civil War's Dick Dowling.

GERRY, not everyone is like you and knows how to place these comments.  I HAVE NO OBJECTION TO HYOUR PLACING IT ANYWHERE YOU LIKE.  What is the big deal about that?   Bernard

Bernard, you are correct. It is not a 'big deal.' I can't move it unfortunately, or I would have with no bother. We found the comment full of merit and hoped you might make it part of the discussion there, where it would more likely be read by those engaged by the topic.