It is often said that learning Irish Gaelic is difficult, and there is some truth to this. However, I’m a strong advocate in the belief that it can be simplified with the proper study methods. 10 years ago I began my exciting journey to learn Irish in a place where there was and still is little support for the language.  Like in most cases, I started by studying books and listening to audio files, but after a while I realized to truly succeed I needed more support. Being completely new to the Celtic branch languages, the grammar and sounds were strange but yet I was fascinated by them. I came to the conclusion that I had to establish a solid foundation with the help of someone who knew the language. It was at that time I started lessons with native Irish speakers from Cork, Ireland, and participated in online Irish Gaelic forums. Overtime, after I developed a knowledge base of the phonetic system and a basic concept of Irish grammar I began to form an idea of how to study it.

Months later, my studying methods became more sophisticated and I adopted a practice of using two language journals: one for actual accounts of the day in Irish only, and the other one to record everything that you learned throughout the day. I gradually learned that both methods supported each other, and in fact, when used together they increased memorization.  The goal of the “Record” journal is to build up a knowledge base each day until the information within becomes second nature. After each day of studying, I carefully organized, recorded, and practiced what I wrote. This in affect allowed me to confidently and easily write a realistic, authentic entry in the “account” book. As you might imagine, all this progress helped me to realize that to learn Irish in the United States you have to be creative.

It is my sincere hope that this blog entry will inspire and assist beginning students of Irish. After all, we’re all here to promote the Irish language and Irish culture.

Do you speak or would you like to speak the Irish language?
Check out our "An Ghaeltacht" members' group: 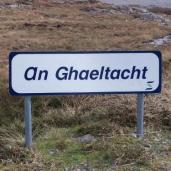 Excellent thoughts, David.  Welcome to The Wild Geese community.  Great to have another Gaeilgeoir aboard.  I'm now living in the heart of the Connemara Gaeltacht, but am still finding it difficult to just make the leap in and go "cold turkey" on English.  Thanks for the encouragement ... I know it can be done!

No problem :}.I acknowledge it is very challenging at times hence why I'm going to add a series of blog posts on this subject. This study method should help you in bounds since you live there! Especially with the other ones I'm planning to post.

I think I need more than this.  I have tried to many times to learn the language of my grandparents - even paid ALOT of money for the Rosetta Stone version and it was a giant fail.

I'm an otherwise intelligent person but I just cannot seem to grasp this language - and my disappointment is just terrible.

Don't feel bad :}. It's not an easy language to learn, everyone seems to struggle with it. If you like, shoot me a message and I'll be glad to provide extra  guidance!