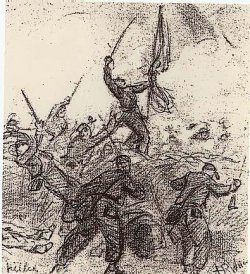 The Battle of Cold Harbor, fought 152 years ago this week, has become a watchword for the futility and destructiveness of warfare. General Ulysses S. Grant, commander of the entire Union Army, personally ordered the final assault of the day, an assault that led to thousands of deaths with no gain. The Irish were there, of course. TWG Contributing Editor Kevin O'Beirne tells us how they fared as Cold Harbor ushers in the era of trench warfare.

The battle would become a legend in its own time, synonymous with wanton, wholesale death and destruction, for practically no gain. The losses, more than 5,500 in dead and wounded in the Union Army alone, were remarkable even in a war that set a new benchmark for savagery. The setting was Cold Harbor, a Virginia crossroads, and the date was June 3, 1864.

The main Union assaulting force that day lost 3,500 men, most within the first hour of the attack. It was not quite the bloodbath that 140 years of legend have made it out to be—popular myth holds that the commander-in-chief of the entire United States Army, Lt. General Ulysses S. Grant, lost 7,000 men killed and several thousand more wounded in just seven minutes.

Nevertheless, the losses were grievous, and in no small way contributed to the epithet that critics gave the commander, "Butcher Grant." And the toll in his Army of the Potomac’s Irish regiments, often marching and fighting under emerald regimental flags, was particularly heavy.

Altogether, the Corcoran Legion lost far more men at Cold Harbor than any other brigade, North or South—900 men were shot down from its ranks in a half-hour that morning, accounting for at least a quarter of all the Federal losses in Grant’s assault. Afterward, two soldiers from the Legion—a member of the 164th New York and an artilleryman—each received the Medal of Honor for their valor at Cold Harbor.

A month earlier, the Union forces, 125,000 strong, had crossed the Rapidan River in central Virginia, personally directed by Grant. Richmond, the Confederate capital, was to be the prize, and its capture, military planners were convinced, would end the war. The day after the crossing, General Robert E. Lee’s Confederate Army of Northern Virginia, with 60,000 men, confronted Grant’s army in a thicket known as the Wilderness of Spotsylvania.

Every day for the next four weeks, the armies hammered each other, from the Wilderness and Spotsylvania Court House, through the battles along the North Anna River and Totopotomoy Creek. Before the month was out, 100,000 would fall from both armies. On June 1, the armies squared off near Cold Harbor, occupying humid, swampy terrain 10 miles northeast of Richmond. They faced each other from defensive trenches about a mile apart in lines seven miles long, north to south, with the Yankees to the east. Opening battles that day were inconclusive, and Grant planned a huge assault by his entire army on June 3.

(Right:  "Battery H at the Battle of Cold
Harbor by Gilbert Gaul.)

The preceding two nights, Grant’s soldiers could hear the Confederates digging and chopping, strengthening their trenches. The night before, Grant aide Horace Porter saw soldiers pinning their names to their clothing. When the signal gun fired at 4:30 a.m. the next morning in the pre-dawn rain, more than 40,000 Union soldiers moved forward to again assault the Confederate earthworks. Most of his Irish regiments would be in the thick of the coming fight.

Like most other regiments in the Fifth Corps, Boston’s Irish Ninth Massachusetts Infantry had had a tough campaign, particularly in the Wilderness. On June 3, the "Fighting Ninth" attacked the Confederate earthworks near the north end of Grant’s lines. An Irishman in the regiment wrote, "Our brigade captured and occupied an outer-work of the enemy which it held and turned against them under fire..." The regiment suffered mercifully few casualties: only 23 men. Four days later, the three-year enlistment of the "Fighting Ninth" expired and most of the regiment headed home to be discharged.

On the opposite end of Grant’s line, the famed Irish Brigade, comprised of the 69th, 88th, and 63rd New York, 28th Massachusetts, and the partly Irish 116th Pennsylvania, formed their ranks in the pre-dawn darkness of June 3 behind Nelson Miles’ brigade.

The Irish Brigade had suffered grievous casualties throughout the campaign. The brigade went forward, behind Miles, shortly after 4:30 a.m. Cavan-born Richard Byrnes, of the 28th Massachusetts, led them. The Irishmen were on familiar ground: they were assaulting Rebel positions on Turkey Hill, where they had fought in the Battle of Gaines’ Mill in June 1862.

Miles’ brigade was shattered and stumbled back. Most of Byrnes’ brigade came up in support, under a hail of Confederate lead. These troops never made it past the Dispatch Station Road. There, with the remnants of Miles’ command, they dug in with bayonets, tin plates, and bare hands, returning fire as best they could with the enemy about 40 yards away.

During this engagement, a bullet passed through Captain James Brady of the 63rd New York and struck Colonel Byrnes, mortally wounding him. Eerily, this fulfilled Byrnes’ premonition of his own death that he had shared with the Irish Brigade’s chaplain 17 days earlier. The Irish Brigade lost 194 in killed, wounded, and missing.

The Legion charged valiantly but took heavy losses. A member described the Rebel fire as "a perfect storm of musketry ... lead and iron filled the air as snowflakes in an angry, driving storm."

Led by Wexford-born Colonel James McMahon, the 164th New York reached the Confederate line, manned by the 17th North Carolina. Standing atop the Rebel entrenchments, McMahon grasped his sword in one hand and the unit’s flag in the other and exhorted his men in their hand-to-hand fight, but was shot repeatedly and killed. When supporting troops failed to appear to widen the breach, the Zouaves retreated 250 yards and dug in, losing 155 of their comrades—over one-third of the regiment. An officer recalled, "Our men ... lay thick before the rebel earth works."

It went similarly with the rest of the Legion. A lieutenant said of the last hundred yards of the Legion’s charge, "They opened upon us with canister and grape, hurling it into our faces and mowing down our lines."

The 155th New York advanced to within 50 yards of the Rebel works, but was unable to get closer. They continued to exchange fire with the Confederates. But after a half-hour, the 155th retreated 250 yards and dug in, leaving 164 men wounded and killed. "There were so many dead men I could have walked from my house to Milledgeville on dead bodies," recalled a Georgian in front of the 155th New York.

The 182nd New York had no better luck, and suffered 86 casualties. A non-Irish heavy artillery regiment that had joined the Legion had to charge through open fields and was butchered—nearly 500 of its men were killed and wounded.

Behind the Corcoran Legion, Joshua Owen’s brigade, including Philadelphia’s Irish 69th Pennsylvania, inadvertently avoided major losses. The brigade was to have come up behind the 164th New York. But Owen inexplicably moved his brigade to the wrong position—for which he would be discharged. As a result, the 69th Pennsylvania was not heavily engaged and suffered only 21 casualties.

Two weeks later, the two exhausted armies moved across the James River to Petersburg, where they settled in for 10 months of siege-like warfare. The guns finally fell silent on April 9, 1865, at Appomattox, when Lee surrendered to Grant.

Modern historians have judged that Grant had little choice militarily and politically except to attack at Cold Harbor. Years later, however, he wrote, "I have always regretted that the last assault at Cold Harbor was ever made ... no advantage whatever was gained to compensate for the heavy loss we sustained."

As they had on many fields before, Irish-Americans at Cold Harbor demonstrated with their bravery and lives that they were willing to fight and, if necessary, die defending their country. WGT

Copyright © 2004 by GAR Media LLC and the author. This article may not be resold, reprinted, or redistributed for compensation of any kind without prior permission from the author. Direct questions about permissions to permissions@garmedia.com.

READ MORE ABOUT ULYSSES S. GRANT AND THE IRISH:

Rhea, Gordon: "Cold Harbor: Grant and Lee, May 26-June 3, 1864," Baton Rouge: LSU Press, 2002 — This volume is the best modern history of the battle. Together with his books on the Wilderness, Spotsylvania, and North Anna, Rhea has written the definitive account of the campaign.

O'Beirne, Kevin: "Our Boys Stood Up Like Heroes: Letters from the 155th New York at Cold Harbor," The Irish Volunteer newsletter, Autumn 2000.

This page was produced by Gerry Regan, with research assistance by Joseph E. Gannon and Brian C. Pohanka.