Loach (pictured, foreground) doesn’t need fantastic sound tracks or the latest and greatest special effects to make a thoroughly enjoyable film, nor indeed does he need to put the biggest movie stars in all his roles. That could distract from what he is trying to do, which is tell the stories, not of the great movers and shakers of the world or the great events, but of the salt-of-the-earth common man raging against a machine that is often impossible to beat, and struggling to do so in obscurity.

SEE 'JIMMY'S HALL' IN A THEATER NEAR YOU

It’s not surprising that Loach has used Irish themes in two of his films over the past nine years, for who has a longer history of raging against the machine of nearly invincible colonialism and injustice than the Irish. In this case, the one doing the raging is Jimmy Gralton, born and raised in a small village in County Leitrim, and returning in 1932 after 10 years in New York, having being driven out during the aftermath of the Irish War of Independence.

Much of Gralton's trouble had centered around the community hall he built on his parents' land, Pearse-Connolly Hall, and his leadership of local land agitation in support of evicted tenant farmers. In June 1922, with Irish Provisional Government forces attempting to arrest him, he fled to New York. He returned when his brother died and his mother needed him, mistakenly thinking that with Eamon de Valera having gained power, things there would be better. 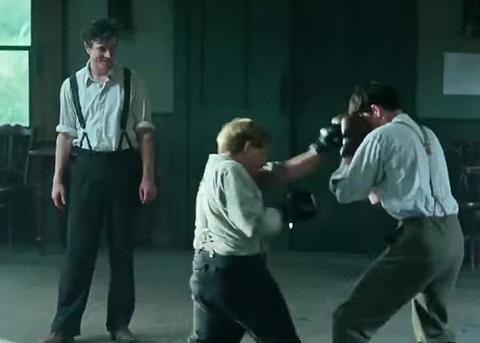 Gralton’s just an ordinary man, punching above his weight in taking on the Catholic establishment and its soon-to-be established “special position” in de Valera's socially conservative government, and he knows it. But in doing that, he’s following in a long Irish tradition going back to the leaders of the United Irishmen, the Young Irelanders, the Fenians, and those who went out during the Easter Rising.

For those who know the early history of the labor movement in the United States, Gralton is also a fine example of the socially progressive archetype found among Irish-Americans. The Irish were in the forefront of the fight for working people in the United States, exemplified by the likes of Terence Vincent Powderly, son of Irish immigrants and one of the leaders of the 19th century Knights of Labor; the tiny dynamo from Cork, labor leader Mary Harris “Mother” Jones; Peter Maguire, a first-generation Irish-American who co-founded the American Federation of Labor; and Kerry-born Mike Quill, a veteran of the Irish War of Independence and a founder of the Transit Workers Union in New York City in 1934. These people, like Gralton, could not watch the powerful take advantage of the weak and not take action.

Gralton resists the urge to fight back against power of the Church and state at first, hoping to just be a farmer on his mother’s land, but his principles eventually have him acceding to local pressure to reopen the hall, especially from the younger people in the area. Soon, in addition to the “sin” of teaching locals about jazz and “indecent” dances from America in his hall, he’s also involved again in advocating for dispossessed tenant farming. The church, local land owners and the government were not pleased.

When the local priest, Father Sheridan, begins to rail against him from the pulpit and attempts to pressure people to stay away from his hall, Gralton confronts him face to face in an attempt to find a compromise. But the priest knows that he has no need to compromise, and Jimmy knows it, too. On one side was all the power of the Church and the government, and on the other was just one man, who had nothing but the absolute moral belief that he is right. "I will come along and listen to you and your trustees," says the priest, "once you have brought me the title deeds to the hall, and have them transferred over to Holy Mother Church." Gralton then knows there is no hope of compromise. "You do listen," he says,"but only when we're on our knees."

It put me in mind of the words of Church reformer Martin Luther, hundreds of years before in his own confrontation with the same institution: "Here I stand; I can do no other.” Gralton can “do no other” than to continue the fight until he is 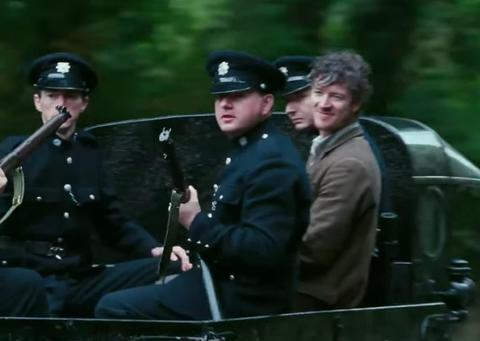 ultimately beaten by the overwhelming power of Church and state.

And in this he finally gets the grudging respect of even his priestly nemesis, who tells his taunting enemies to be quiet as Gralton is being taken away by the Garda. "Show the man some respect! He has more courage and decency than all of you put together,” Father Sheridan tells them.

As he is driven away in the Garda's truck and the same young people who had originally persuaded him to reopen the hall surround the truck, it is clear that though he’s lost this battle, he knows he has planted the seeds for another generation to continue the struggle. As Padraig Pearse said after the Easter Rising: “If our deed has not been sufficient to win freedom, then our children will win it by a better deed.” JG