On 22 August 1798 a French force of about 1000 under General Jean Humbert (left) landed in Killala Bay in County Mayo Ireland, and provided military assistance to the Irish rebels in the "Rising of ‘98" ‑‑‑ sometimes referred to as Bliadhan na bhFrancach or "The Year of the French."  About five days later Humbert's force surprised and routed a British force at Castlebar.  This encounter is often referred to as the "Castlebar races."  Nevertheless the 1798 Rising was ultimately suppressed, and Humbert surrendered to British General Cornwallis (of Yorktown fame) at Ballinamuck, County Longford, in early September.  Humbert was repatriated to France later in 1798.

Humbert spent his remaining years in New Orleans.  He died in New Orleans on 2 January 1823 ‑‑‑ almost eight years after the Battle of New Orleans.  New Orleans gave him a hero's funeral.  The corps d'elite of The Louisiana Legion formed a guard of honor and a huge concourse of citizens came out spontaneously to pay him a final tribute.  Humbert's remains were interred in Saint Louis Parochial Cemetery No. 1 on 3 January 1823.  The exact burial site within the cemetery is unknown.  But the cemetery is near the Saint Louis Cathedral in Jackson Square near the French Quarter. The author at the site of the Battle of New Orleans

I last visited in New Orleans in December of 2000.  I found a (very) brief reference to Humbert in a book at Chalmette National Park (the site of the battle).   The photo (above) shows the site of the Battle of New Orleans, and it is now the Chalmette National Historical Park a href="http://www.nps.gov/jela/chalmette-battlefield.htm%3E">http://www.nps.gov/jela/chalmette-battlefield.htm>; run by the US Department of Interior ‑ National Park Service.  I doubt that the smoke stack was there in 1815.  But the cannon and fortifications are real enough.  Big irony, the Treaty of Ghent (Belgium) ending the War was signed on 24 December 1814 ‑‑‑ about two weeks earlier.  Communications in the early 19th century weren't what we have today.  So the battle ensued.

Books, Articles, and Websites on "Rising of ‘98" ‑‑‑ sometimes referred to as Bliadhan na bhFrancach or "The Year 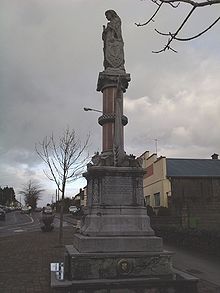 The Year of the French  by Thomas Flanagan.  Flanagan's The Year of the French was also made into a movie.  As far as I know it was only show only on RTE, and so far has not been released in America.   The Chieftains provided the musical background for the film, with a recording produced under the title, “Year of the French.” (Right: The monument to Humbert in Ballina, Co. Mayo.)

“Jackson wins at New Orleans” by Edward T. O'Donnell.  Published in the Irish Echo in December 2002.

The War of 1812 by David S. Heidler and Jeanne T. Heidler

RTE actually did a mini-series (6 episodes), not a movie, based on "The Year of the French" and it ran once here in the US. I believe it was on PBS. If memory serves it was probably the mid 80s or so. I saw some of it, though I don't think I ever saw the last two. I've been trying to find it anywhere on DVD since then, but haven't been able to find it. If anyone has any information about this mini-series being available on DVD somewhere, or even video tape, I'd love to get ahold of one. Alas though I think it was never done.