It has been said that one of the traits the Irish brought to these shores was that of survival. Heavyweight champion James J. Braddock demonstrated that in life, as well as the boxing ring.

The inspiring tale of Braddock, who came off public assistance to win the world championship, is depicted in the film "Cinderella Man." Braddock's essential decency while overcoming crushing poverty underpins the movie, directed by Ron Howard and starring Russell Crowe, Renée Zellweger and this year's Oscar-nominated Paul Giamatti.

As with many tales, the true story is arguably more compelling than the celluloid version.

Braddock was born on June 7, 1905. He entered this world weighing a robust 17 pounds, perhaps a sign of his destiny. He was the largest of the seven children born to Joseph Braddock and Elizabeth O'Toole. Their birthplace has long been obscured by the fighter's miraculous achievement. Most of what is written about the fighter details his struggles in and out of the ring during the Great Depression. One book, "Braddock: The Rise of the Cinderella Man," by Jim Hague, suggests that his parents came to the United States directly from Ireland.

However, ESPN correspondent Jeremy Schaap writes in his book "Cinderella Man" that Joseph and Elizabeth were born in England to Irish-born parents and raised in the Irish slums of Manchester. Living as Irish amid an often-hostile English culture, Schaap suggests, made the Braddocks more culturally Irish than English or American.

In New York, the Braddocks lived in a small apartment on West 48th Street in New York City --- that Emerald enclave in Manhattan known as Hell's Kitchen. When Braddock was a young child, the clan moved to West New York, N.J.

At the time of Braddock's youth, the three major sports in the United States were baseball, boxing and horse racing. And while Braddock showed some interest in baseball early in his life, the boxing world had already produced such Irish heroes as John L. Sullivan, Jack Dempsey and Mickey Walker. For a tough Irish kid, it was an easy path to follow.

Braddock turned pro as a light heavyweight in 1926 and accelerated to the top of ratings. Within three years he secured a title fight against 175-pound champion Tommy Loughran at Yankee Stadium. Braddock hurt the champion early and perhaps that was his undoing. Loughran, a master boxer, kept his distance and retained his title by outjabbing Braddock for the remainder of the bout. Years later, Braddock recalled a humorous exchange he and manager Joe Gould had between rounds of that fight.

"How am I doing?' asked Braddock when he came back to the corner after the seventh round.

"Not so good," Gould said. "You gotta stop some of those left hands."

"You don't see any of them getting by me, do you?" deadpanned Braddock. 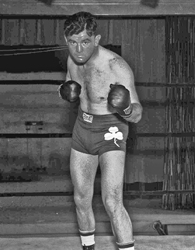 It was later that year -- Black Tuesday, Oct. 29 -- that the stock market crashed and the Great Depression began. It hurt everyone. Butchers, bankers and boxers. Braddock, now with a family to support, was working odd jobs, taking fights on short notice and not spending as much time in the gym. The results of the struggle to simply survive began to show in his record. He lost three-out-of-five in 1930, two-out-of-four in 1931 and six-out-of-eight in 1932.

Charley Gellman, another pug from West New York, began boxing as a teenager in the early 1930s to help his parents meet the household expenses. Although he was younger than Braddock, the two trained together and formed a friendship that lasted decades. Gellman died at the age of 88 in November, but shared numerous Braddock stories with this author over the years.

"Sure Jimmy had problems during the depression," Gellman said. "Everybody did. He fought to make a living but he was on the WPA (Work Project Administration). The WPA gave people jobs on government projects. All the fighters had jobs then. The iceman was a fighter, the ferry boat operator was a fighter and they'd fight once a week at the playgrounds. People today don't understand how hard it was to get by during that time."

Braddock would rise each morning at 6:30 a.m. and walk to the New Jersey piers to shape up for work on the docks. He'd lift railroad ties for eight hours a day. If he couldn't find work there, he'd try the coal docks from 7 p.m. to 7 a.m. for 60 cents an hour. On a good day, he'd work both jobs, stopping at home only for a shower and dinner. And all the while, he took whatever fights he could.

It was the hardscrabble existence of those years, plus a rough and tumble childhood, that would later pay dividends in the ring, where determination and courage often count just as much as talent.

"I knew Jimmy Braddock all my life," Gellman said. "We grew up together. He never had a bad word to say about anybody. I thought of him as family. We used to spar together. He took a shine to me. He got a kick out of my father because my father never liked the idea of me being a fighter. He'd say, 'Pop, don't worry about it, he'll be all right.' "

They worked out at the North Bergen Social and Athletic Club, the kind of place Gellman described as having a broken down ring and one heavy bag. There was a bar attached to the front and poolroom. There were some days when the bartender would even come back to the gym for some sparring.

"This is the kind of guy Braddock was," recalled Gellman. "I had a fight at the West New York Playgrounds. It was a four-round fight, and I didn't have any boxing shoes. The promoter said I couldn't wear sneakers. Someone told me to go over to Braddock's house and see if he would lend me a pair. He lived on Hudson Boulevard, it wasn't too far. I went to his house to ask him if I could borrow his boxing shoes. He gave them to me, but he was a heavyweight and I was a middleweight. They were too big. So he took some newspaper and stuffed it into the tip of the shoes so they would fit. And that's what I boxed in that night."

When Braddock married Mae, they started out in a new $67-a-month apartment. But as times became more difficult, they wound up in a basement apartment for $25 a month. Braddock was getting $19-per-week from the WPA, and for eight months they were on the relief rolls.

Braddock's break came June 14, 1934, when Primo Carnera defended the heavyweight title against Max Baer. One of Carnera's sparring partners was a tough, up-and-comer named "Corn" Griffin. He caught the attention of the media while sparring with Carnera, and they were looking for an opponent to showcase Griffin on the undercard. They offered Braddock $250 for a six-round bout. When the deal was signed, the promoter asked Gould, referring to his fighter, "Do you think he'll stand up for six rounds?"

Braddock won by third-round knockout. Later that evening, Baer would score 11 knockdowns en route to winning the title from Carnera.

After the bout, Braddock said to Gould, "I did that on hash, get me a couple of steaks and there is no telling what I'll do."

Impressed with his showing against Griffin, the promoters booked him at Manhattan's legendary Madison Square Garden, and Braddock won consecutive fights to earn a title shot against Max Baer.

Braddock, a week away from his 30th birthday, would meet Baer on June 13, 1935, in the open-air Madison Square Garden Bowl, across the East River, in the city's borough of Queens. Baer, a devastating puncher in the ring, once killed a man during a bout. He was the 10-1 favorite to retain the title. On this night, Braddock outboxed the slugger and became heavyweight champion of the world. He jabbed and circled to the left, staying away from Baer's powerful right hand.

Damon Runyon, reporting on the fight, wrote the next day, "The fistic fairy tale comes true. James J. Braddock of New Jersey, 'The Cinderella Man' of pugilism, is the new heavyweight champion of the world." The story of Braddock and his triumph captured and inspired a beleagured nation much the way Seabiscuit, the long-shot thoroughbred did during the same era. Yet, no matter what Braddock accomplished in the ring, it would be the things he did outside of the ring that would define him. With his earnings from the Baer fight, Braddock repaid all of the money he received while on relief.

Braddock would lose the heavyweight title in his first defense, falling in eight rounds in 1937 to future Hall of Famer Joe Louis. Braddock retired from the ring a year later and worked various jobs. Once, he even returned to the New Jersey piers for work and later was part of a construction crew that built the Verrazano Narrows Bridge, spanning Brooklyn and Staten Island.

Braddock died Nov. 29, 1974, at his home in North Bergen, N.J. The man who portrayed him in "Cinderella Man" summed up the fighter's life, with perhaps a bit envy, with these words:

"After boxing," said Crowe, "he didn't have to go around being a champ the rest of his life because he just was. He was a champion man. He died in 1974 in the same house he bought with the winnings from 1935. He was still desperately in love with his wife. He watched his children grow up. He saw his grandchildren born. To me, it was a wonderful, successful American life, and that was why it is so important to tell the story. He was on the positive side of boxing, the true side of boxing."

Loved the movie, love the man, and love this article!  You brought out many details that I did not know.  We are all flawed, so I try not to "hero-worship" anyone, but Braddock really tests my resolve.

Comment by Gerry Regan on June 8, 2013 at 10:18am
Glad to hear the Braddock story moved you so, Kelly. That's the wonder to me of films, how it can so readily stir emotions.