Irish Heritage Tours of Cuba in April and November

The Irish have a long-term presence in Cuban history.  We are undertaking two exceptional journeys to explore the Irish diaspora's legacy, along with deepening the links of Irish traditional music and dance with Cuban Celtic and Latin culture. 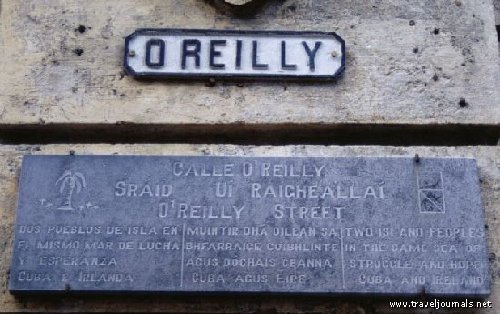 Named for General Alejandro O’Reilly, a native of County Meath and a foreign officer in the service of the Spanish crown. As second in command in Cuba he  is remembered for having organised the military forces on the island after British withdrawal in 1763, particularly the Black and Mulatto Militias.   www.irlandeses.org/0711fernandezmoya2.htm

In the 17th and 18th centuries, the Irish and their descendants were part of the Spanish colonial venture in Cuba, as elsewhere in Latin America.  Catholic nobility fled Ireland and settled in Spain, marrying with their peers, pursuing military and commercial careers abroad and developing large sugar holdings.

In the 19th century, Irish came to Cuba via the US. They built railroads, created schools and provided engineers for the sugar mills. Some became active in the struggle for independence and were imprisoned and executed by Spain.

The flow most notably reversed when Father Felix Varela fled a Spanish death sentence in the 1820s because of his advocacy for independence and the abolition of slavery. In New York he became a prominent friend of Irish famine immigrants. He learned the Irish language and in 1837 was named Vicar General of the Diocese of New York. (more here)

In the 1870s a Cuban sugar planter or trader sent his sculptor son Juan Vivion de Valera to New York to escape the Spanish draft. Vivion married Catherine Coll, an immigrant to Brooklyn from Bruree, County Limerick. After Vivion died, their two year old son Eamon de Valera, was sent to Ireland where he became a leader of the independence struggle and President. (more here)

Rafael Moya has written extensively about the Irish in Cuba. (excerpted here, full article here) He is seeking records to confirm Vivion de Valera's birthplace, one of the destinations for our tours.

For further information about the tours, contact John McAuliff at jmcauliff@ffrd.org.

John, what's the situation today for Americans traveling to Cuba? There once was a prohibition on such travel, no? Are all restrictions eased? What would you say is your favorite part of travel to Cuba? How many trips have you made?

President Obama opened the door to legal purposeful travel in 2011.  As a result several hundred companies and not-for-profits are bringing Americans to Cuba, almost 100,000 last year, plus 350,000 Cuban Americans who received total freedom to travel at the beginning of his Administration..

Most of the trips cost twice as much as our April program and none of them use the Irish and Celtic heritage as the window into Cuban history and culture and people to people engagement.

Unfortunately the only way to go legally is still as part of an organized tour.

My favorite aspect of our trips is getting to know an expanding variety of Cubans.

I have been in Cuba about 20 times since the late 1990s, including seven times last year.

Oh yes, and the craic is amazing, both Celtic and Latin.

Need a professional photojournalist on the November tour, John?  I can imagine some of the photos I could capture for you (and for The Wild Geese), and the mental images are stunning. :-)

We would love to have you and others with professional skills join the trip, e.g. academic specialists, musicians.  The time is short, but the April 20-27 trip offers similar opportunities.

Thanks to the network of the Wild Geese, an exciting new ingredient may be added to our April trip,

I received the message below from Irish documentary film maker, Charles O'Brien, who is working on a project about Dynamite Johnny O'Brien, a New Yorker who ran guns to Cuban fighters for independence from Spain.

As it happens Charles is also a singer and songwriter.

It will be a tremendous boost to his project, and strengthen the Irish participation in CeltFest.

Is there anyone on The Wild Geese that might find this endeavor of enough interest to make a $3000 grant or donation?

My name is Charles O' Brien. I'm a musician and documentary maker from Killarney, Ireland.

I presented the documentary Saol John Riely for Irish T.V. in 2010. Saol Riely, told the story of John Riely-19th century soldier and leader of The San Patricio Battalion of the Mexican Army.

For the past 5 years I've been researching the life of Captain "Dynamite" Johnny O' Brien: Irish-American filibusterer, and hero of the Cuban War of Independence. I'm currently putting together a documentary film on the man (https://www.facebook.com/ACaptainUnafraid), and have researched his life extensively. I recently wrote an article about Johnny which you can read here. http://ildaite.blogspot.ie/2014/03/st-patricks-day-1913.html I travelled to Arkansas and interviewed his great granddaughters in 2011, and that was the beginning of the gestation of the film.

I have been aware of yourself, and the Fund For Reconciliation and Development for a couple of years, and have been trying to get my film made in various guises for around the same amount of time.

My intention now, is to fund the film through the crowd funding platform Indiegogo. That campaign will begin by the end of the week, and will run until the end of May. I have been in touch with Dynamite Johnny's great granddaughters since 2011, and they may be wishing to travel to Cuba from the U.S. for the documentary. If this was the case, how might this be facilitated as regards visas, would the Fund for Reconciliation and Development be able to arrange for them to travel from the U.S.? The plan is to travel sometime before September. I was in touch with them before Christmas and will touch base with them in the next couple of days before I begin the Indiegogo campaign. I hope this is all of interest to you, and if you can help in any way with the dissemination of my plans, all the better!

Wow ... that would be cool!  Hope Charles can go along on the trip.

Here is the link for Charles indiegogo campaign.  http://igg.me/at/ACaptainUnafraid/x/5726434

Take a look and give him a hand if you are so disposed.

Hi, I was wondering if you had any information on the O'Halloran family in Cuba, based in San Antonio de los Banos, which you have highlighted on your map in this article.  My great great grandmother was Maria O'Halloran. I have my family traced all the way back to Rosario O'Halloran who was born around 1800.  Any information or direction would be extremely appreciated! Thank you!

My best advice is that you join us in Cuba, Nov 4 - 12. You will meet our Cuban friends who are exploring the Irish heritage. If records exist they would presumably be in the local church.

The trip combines a cultural program with Mick Moloney and friends with an introduction to the diaspora history. http://cubapeopletopeople.blogspot.com/2014/03/irish-heritage-progr...