(First published 1/9/12) Patrick Young is a blogger for Long Island Wins, a communications and organizing campaign focused on immigrants’ needs and immigration reform in Long Island, in New York State.  In his blogs, he has written extensively on the experiences of immigrants in America, including an extensive series on Irish immigrants in the Civil War.  Among the Irish who enlisted as soldiers, many joined units of Zouaves, regiments with colorful uniforms modeled after the French infantry. (Above: a Zouave of the 69th New York at the 1st Battle of Bull Run, by Don Troiani.)  Mr. Young’s research on the Irish Zouaves sheds light on the soldiers’ motives for fighting even in the midst of anti-immigrant sentiments at home, and he relates their struggles to those of today’s immigrants.

TheWildGeese.com’s Daniel Marrin spoke with Mr. Young about this aspect of the Irish experience during America's Civil War.

TheWildGeese.com: When I think about the Irish during the Civil War, especially those of New York, the most prominent memory is of the Draft Riots, the local uprising against Lincoln. Yet you wrote that the Irish ethnic firemen seemed to flock to join the [Union army] Zouaves.  Why do you think they joined in such droves?  Was there just such a buildup of support for Lincoln and the Union that they thought nothing of joining?

Patrick Young (left): Most of New York’s Irish never came to support Lincoln, at least when he was alive. The Zouaves, and thousands of other immigrants, rushed to the colors because they saw the only true democratic republic in the world threatened with annihilation if it was broken up by civil war. This would not only cut off America as a refuge for the persecuted Irish; it would also take away the United States as an example for Ireland’s republican rebels. For them, if the Confederates won, then the British won!

WG: Were Irish soldiers promised some kinds of pensions or post-war benefits during the war?

Young: No, they weren’t even promised regular pay. Bounties would become an important recruitment tool later in the war, but in 1861 recruits were not expecting anything more than a chance to preserve the United States and show their qualities as American citizens.

WG: You’ve written about The New York Times’ scathing attacks on the Irish Zouaves’ character after Bull Run.  Did the Irish have allies in the press who gave [the Zouaves’] side of the story?  How did their side of the story tend to get around?

(Below right: The Fire Zouaves at 1st Bull Run, by Don Troiani.) Young: The Fire Zouaves themselves tried to answer The New York Times, but their answer, which dwells on what today seem like purely technical details, did not seem to help them much.  In fact, The New York Times just used the letter from the firemen to stir up more hatred.  The Republican editor of The New York Tribune, Horace Greeley, did try to defend them.  Greeley clearly saw the elitism and prejudice in the Times’ treatment of the Zouaves, and he argued that “the firemen who risk life in defense of our life … were among the very first to offer their services to the Government.” He added that while The New York Times called the Zouaves men without character, they, in fact, “gave up good employment to go to the war.”  Unfortunately, the virulence of the Times overwhelmed Greeley’s reasonable defense.

WG: Why were the Irish overwhelmingly Democratic voters in that time?

Young: The explosive growth of anti-immigrant nativism and the Know Nothings concentrated the Irish into the pro-immigrant Democratic Party. The Democrats were also the party of anti-elitist members of the urban working class. They opposed early efforts at prohibition and other forms of neo-Puritanism and they opened government employment to immigrants.  The Irish saw the new Republican Party as the Know Nothings in disguise.

WG: Did the Civil War have the effect of easing Irish assimilation and erasing the [Irish as dumb and ugly as] gorilla stereotype?  What, if not the war, contributed toward that change in popular opinion?

(Below left: The 69th New York celebrating Mass in the field.) 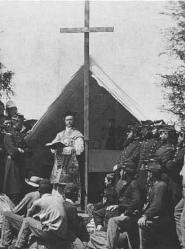 Young: It eased “assimilation” because it changed how that concept was defined. In the 1850s, becoming American meant converting to Protestantism and giving up an Irish identity. By the end of the war, it meant believing in democracy and serving one’s country. The Irish identity was no longer considered incompatible with Americanism. In a sense, the Irish Union soldier, by insisting on being ministered by Catholic chaplains and celebrating Irish culture openly in the Army, helped create the framework for our modern respect for many cultural forms among the American people.

Young: They see the experiences of these young Irishmen and their families replicated in their own lives. They take the toughest jobs, yet don’t feel appreciated. They struggle with how to retain elements of their old country in a country where their aspirations now reside, just as the Irish of 150 years ago struggled with the question of whether they could find a way to be good Americans and good Irishmen and Irishwomen.  I’ve seen several discussions (in Spanish) about the feelings of commonality some of my Latino readers feel with these long-dead Irish.

To read more of Mr. Young, or other writers for Long Island Wins, visit http://longislandwins.com.