Ireland Is Calling And I Must Go 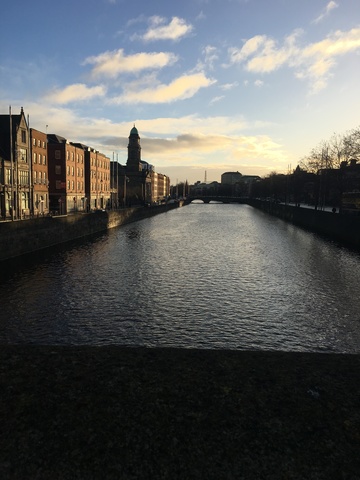 Ireland has been calling to me for many years and last month I finally answered.  My sister, Gloria, our life long friend, Valerie and my newphew Chris and his girlfriend, Morgan, spent nine days (not nearly enough time) visiting Dublin and Northern Ireland and we even made a day trip to Glasgow and Edingburgh, Scotland.

We arrived at 7:00am and the sun would not be up for another hour so my first glimpse of the island was scattered lights in the darkness.  We had spent nearly twenty hours travelling and we were exhausted so thankfully we got through customs quickly and was on a bus headed to our AirBnB apartment in historic Smithfield Square in about an hour.  As the bus made it's way from the airport I recognized many of the sites I had been learning about: the River Liffey, the statue of Daniel O'Connell, the replica of the Jeanie Johnston famine ship, Trinity College and Christchurch Cathedral.  We got off the bus on the south side of the Liffey and walked the couple blocks to our apartment.

We stayed in an apartment overlooking the old Jameson Whisky Distillery. Even though it was a month past Christmas the tree was still up. From the upstairs bedroom you could see the village of Howth in the distance. 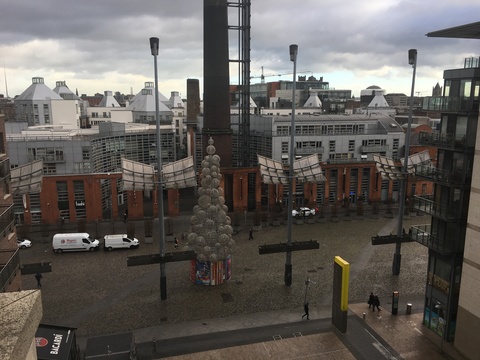 Gloria and I on the Grattan Bridge 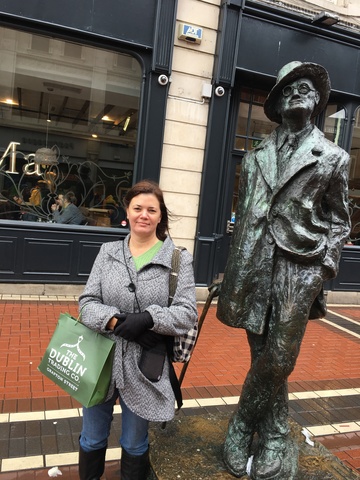 Souvenir shopping and hanging out with James Joyce 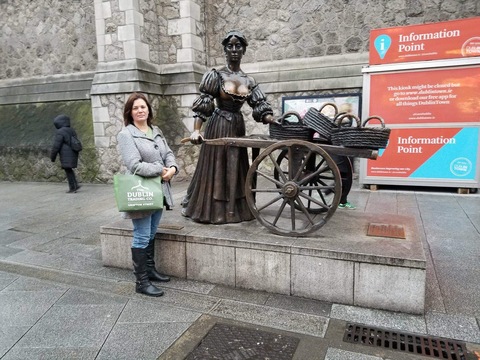 "In Dublin's fair city where the girls are so pretty I first set my eyes on Molly Malone. She wheeled her wheelbarrow through streets broad and narrow crying cockles and mussels alive, alive, oh!"

I also wanted to take a picture with the statue of Oscar Wilde in Merrion Square but by the time we got there the gates in the park had been locked for the night.  We walked for nearly nine hours the first day and saw the Famine Memorial,  O'Connell St, The General Post Office, Trinity College, Grafton St, St Stephen's Green and Merrion Square.  Being tourists we decided to have a drink at the Temple Bar before we called it a day. Me, Gloria, Morgan and Chris at Temple Bar 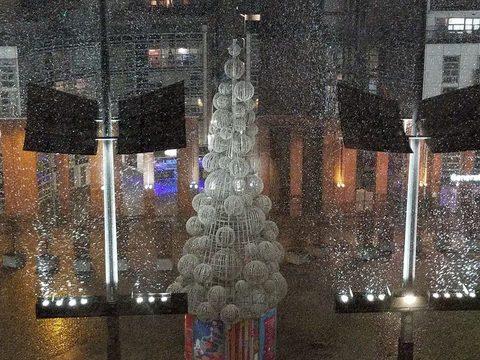 We made it back to the apartment before it started snowing.  The wind was also howling unbelievably loud. 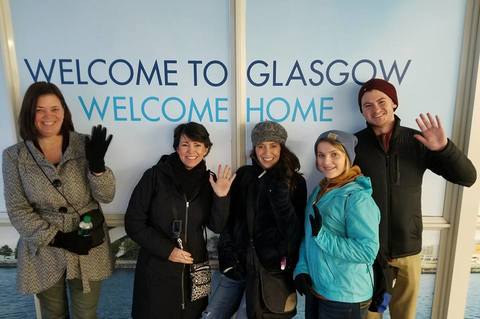 We decided to fly over to Scotland for a day trip.  We were going to stay in Glasgow all day but the Irishman who took our picture suggested we take the train to Edinburgh.  We walked around the Royal Mile and toured Edinburgh Castle. 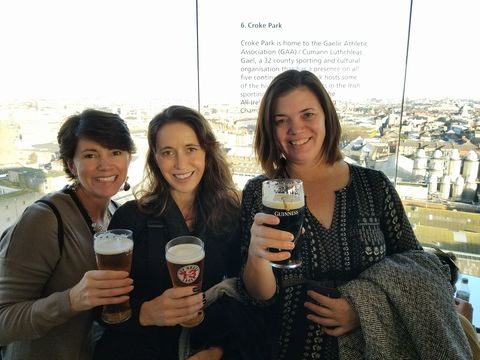 Gloria, Valerie and me at the Gravity Bar at the Guinness Storehouse

My favorite experience was going to The Cobblestone Pub in Smithfield to hear live, tradtional music.  Besides the musicians there were a few sean nos singers and I really enjoyed listening to them.  I would suggest it to anyone visiting Dublin. The talented musicians at The Cobblestone

What is Dublin without a pub crawl?  We visited a few pubs: The Swan, O'Donoghue's, Searson's, The Brazen Head and Peadar Kearney's to name a few. 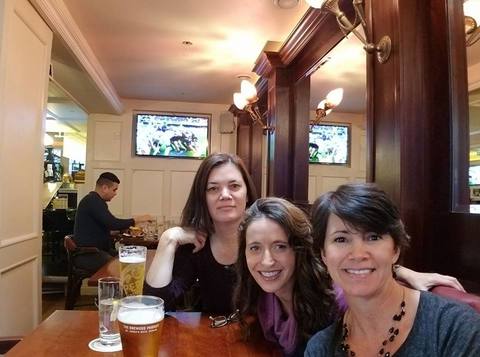 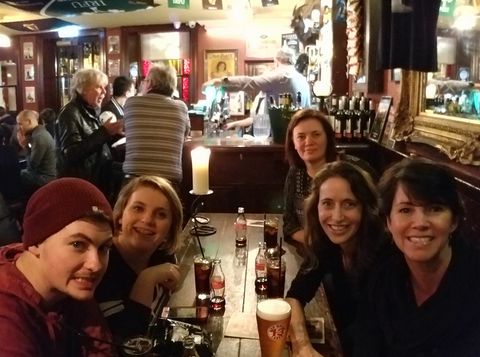 I think we all decided, in our non-whisky drinker opinion, that Irish whisky was better than Scotch (Glenfidditch). We also spent a day touring Northern Ireland.  We got to to see The Giant's Causeway, The Dark Hedges, the Carrick-a-Reede Rope Bridge and Dunluce Castle.  The weather was cold and miserable: it was snowing, raining and the ground was icy.  Our tour bus got stuck in the ice for over an hour in a parking lot and I slipped and fell walking on the ice.  Luckily, I only hurt my pride.  Weather aside, I thought Northern Ireland was beautiful and we had a great time. Me, Gloria and Valerie at The Carrick-a-Reede Rope Bridge,

that we didn't get to cross 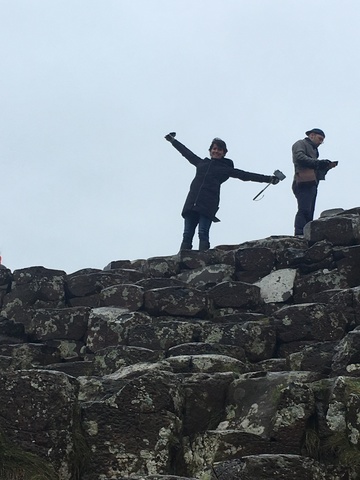 Gloria at the Giant's Causeway

So, was it science or giants that built the causeway?  I say it was giants. We were supposed to have some time to walk around Belfast at the end of the tour but due to the bus getting stuck in the ice we didn't get back to Belfast before it got dark and we didn't have time. I really wanted to see the peace murals so that was very disappointing.  We did get to see the Albert Memorial Clock, the Europa Hotel (the most bombed hotel in Europe) and Belfast City Hall while driving by in the bus. 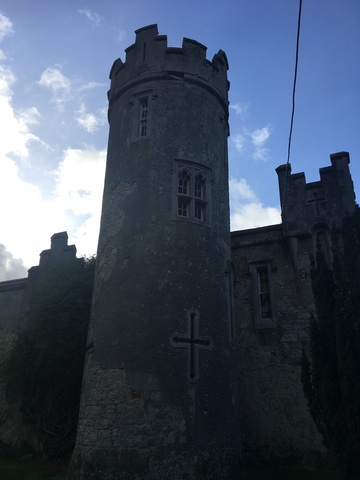 The round tower at Howth Castle

We all had an amazing time and the Irish people we met were so friendly.  From the taxi drivers who shared the history of Dublin and gave us commentary on the sites around town, and who were patient with my attempts to speak the few Irish words I know, to the farmer from Roscommon I sat next to on the plane back from Scotland, to the musicians at The Cobblestone who welcomed us to sit in their area so we could hear the music over the large crowd of people talking.  The only places we didn't get to visit in Dublin that I really wanted to see was Kilmainham Gaol, Glasnevin Cemetery and Arbor Hill Cemetery.  On the day we left I had about an hour to walk over to The National Museum at Collins Barracks but I didn't have time to walk around to Arbor Hill Cemetery, which is just behind it.  We also planned to go to Galway and Cliffs of Moher, but we just didn't have enough time.  We packed a lot in to nine days (we walked 52 miles!) and I'm already planning my next trip.  Next time, I will visit the west of Ireland. 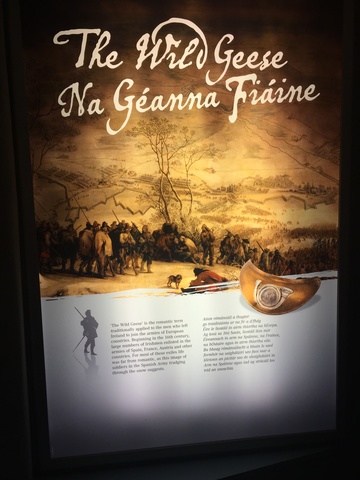 Part of a display at The National Museum of Ireland, Collins Barracks

Thanks for sharing this, Honora. I first went to Ireland 25 years ago. My wife and I first went there together 11 years ago, and we keep going back every summer. You do definitely want to go back and tour the west. We've seen most of Ireland now, from east to west, and it's all great, but the beauty of the western coastline, all the way from Cork in the south to Donegal in the north, really is amazing.

I think many of the members here can fully understand your statement about how Ireland was calling to you. Lots of us have heard it.