The following Q&A with award-winning composer George Fenton is part of Sixteen Films' Production Notes for its biopic "Jimmy's Hall," largely filmed in the story's actual settings in County Leitrim. Fenton has composed music for more than 70 films, including "Jimmy's Hall" and "The Wind That Shakes the Barley." His score for Richard Attenborough's 1982 film "Gandhi" was nominated for an Academy Award. The notes, assembled for the produceers by Benji Wilson, were presented to the entertainment industry trade and news media. We are delighted to share these perspectives with our readership, in cooperation with Sixteen Films and Sony Pictures Classics.

What was your process here – did you work from a script or from a cut of the film itself?

Usually, on the films I’ve done for Ken, I don’t see the scripts -­‐ he likes me to see the film without any preconceptions. That’s a good thing but in the case of this film I did see the script because of all the music that’s in the film. We had to go through and find tunes to select and look at what kind of lineup the band would be in the hall. Paul [Laverty] had done a lot of work about the fact that in the hall, when it was first opened, they played traditional music and they danced.

What research did you do?

The first time I went out to Sligo we had a lot of musicians who came to visit. We all met in a pub -­‐ they took it in turns to play and people danced, and then we hung out with them and chatted about the history of what they play. The most famous tradition in Irish music really is in Sligo, and it’s been passed down father to son, mother to son, father to daughter. It’s like there’s a legacy of fine traditional music. A lot of the musicians who are famous in Sligo went to America and then came back again, so the guys that played for us were all in some way connected with that tradition, either personally or through being taught. In the course of talking to them and looking at old photos and things like that, we worked out more or less what the line up would have been in the hall and then we chose the tunes they played and the musicians to play them.

More broadly, what is the role of music in this story? The music that they play in the film has a very specific role, which is that the church didn’t like the free expression of the hall and in particular they didn’t like the dancing -­‐ even the traditional Irish dancing that you see in the film. It’s not what you associate now with Irish dancing. It’s not like Michael Flatley, all contained, arms down by your side. It’s much freer and looser -­‐ it looks much more like tap dancing. In any case, the church didn’t like that and then they particularly didn’t like it when musicians came back from America and managed to borrow or buy instruments from the army that they could then play jazz on. When the jazz band plays in the hall that really is a statement. In fact, it was right around this time that a priest in Dublin started a political party called ‘The Anti-­‐Jazz Movement’, because jazz sounded so threatening. 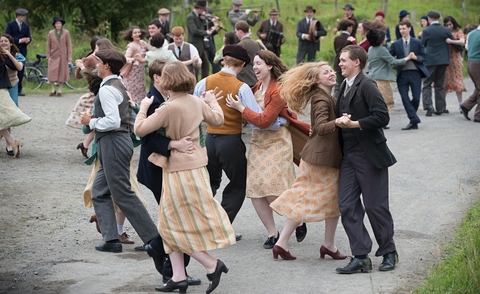 Does your score attempt to echo the Irish musical tradition?

I don’t ignore it, but I haven’t written a score that is traditional Irish music. What I was more driven by, actually, was the music of Republican songs. They’re basically old-­‐ fashioned songs like ‘Come Out, You Black and Tans,’ songs that were written around that time. They’re kind of ‘Celtic’ in feel, but generally ‘Celtic’ -­‐ they’re melodies that are Irish, but could be Scottish, could almost come from anywhere really. I used a small group of cellos and basses, some percussionists and guitars and then fiddles, and tried to get a sort of earthy quality. Then there are some solo voices – Jimmy’s story is introduced at the beginning with a solo trumpet which, of course, is not in any way Irish. But I did base the melody of it on a mode that’s common in Irish music. The reason that I used a trumpet was because it had a sonic connection with the music of New York, and that’s how the film begins, with imagery from the Great Depression, so it was quite nice to be able to use brass and it did not seem peculiar. The trumpet line is like Jimmy’s call, the thing that drives him. It comes at the beginning of the film, it reminds him of the hall when it was opened and then it returns when he is galvanized by the people who are evicted. It’s when he decides to go, as it were, back into battle and put himself at great risk that you hear this same trumpet theme come back. So it’s about both what he stood for and what he lost. The trumpet’s quite good in that way because it sounds like something that’s lost. It comes out of the air but, at the same time, it has a sort of determination about the sound.

You have worked on 17 of Ken Loach’s films. How has Jimmy’s Hall compared to previous scores? It’s been particularly rich musically. Whenever I have done films with him which have involved telling a story that is not an English story, like Land and Freedom, Carla’s Song, The Wind that Shakes the Barley and so on, it’s always slightly different. In the case of this film, because there was music also in the film and there’s both jazz and traditional Irish music, it feels like it’s got quite a rich canvas musically -­‐ but it’s delivered in the way that Ken always does, which is very particular. It’s not like working for anybody else. He’s very exercised about music not being manipulative and that’s quite hard, particularly today when we’re all so used to music all the time. You have to really strip it down and say, ‘Well, where does it actually have something to say? Can it say it very simply in a glancing way and reflect what you want without somehow soliciting that?’

So it’s always quite a challenge -­‐ particularly when I’d just finished doing a Disney film about grizzly bears, which couldn’t have been more polarized than this!

You can listen to sound files of some of the songs HERE.