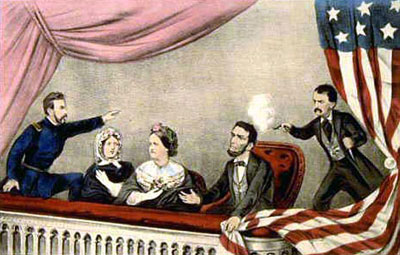 January 4, 1865 the Provost Marshal General James B. Fry, directed O’Beirne to relieve Captain Putnam as Provost Marshal of the District of Columbia. O’Beirne recalled his primary mission was to “purge the office” of corrupt officers and officials and restore public confidence in the office. He overhauled the department, firing clerks, and transferring officers guilty of questionable practices and corruption. His efforts earned him a brevet promotion to Lieutenant Colonel.

As Provost Marshal O’Beirne was responsible for the safety of the President and his family. The night of Friday, April 14, O’Beirne acceded to Mrs. Lincoln request he assign John Parker, a soldier with a bad record, to guard the President’s box during the performance of “Our American Cousin.” Parker left his post and cleared the way for John Wilkes Booth to shoot Lincoln.

O’Beirne arrived at the Peterson House where the dying President had been taken. Stanton arrived and ordered O’Beirne to bring the Vice President to the house. O’Beirne hurried to Kirkwood House where Vice President Andrew Johnson lived. Johnson and his servant related that they heard footsteps in the room above of someone pacing. The news of the attempted assassination of Seward and his son planted the germ of a vast conspiracy to murder the President and the members of his administration, decapitating the head of the Union government. O’Beirne advised they wait for an armed escort, but Johnson angrily ordered they proceed to the house where Lincoln lay dying. 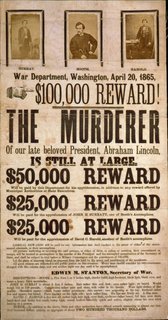 shooting of the President and the attempted murder of the Sewards. They arrived safely and joined the gathering of the Cabinet and leading members of the Congress. Saturday morning the fifteenth at 7:30 a.m. Lincoln breathed his last and Andrew Johnson was sworn in as the seventeenth President of the United States.

O’Beirne returned to the Kirkwood house and inquired who stayed in the room above the Vice President’s. He was informed that a gentleman named George Atzerodt booked the room. O’Beirne demanded the manager take him there. O’Beirne’s search of the room yielded a pistol, knife, and the bank book of John Wilkes Booth and other information that allowed O’Beirne to name the conspirators. It was already known that Lincoln’s murderer was Booth, a scion of a celebrated family of American actors. He had been identified when he leaped from the President’s box after shooting him.  He turned the bank book and the names John Wilkes Booth, Atzerodt, Lewis Paine, Davey Harold, John and Mary Surratt over to Stanton. Stanton that Sunday ordered O’Beirne to take his detectives and hunt down the conspirators.

They quickly arrested Mary Surratt and Paine at Mrs. Suratt’s Boarding House. O’Beirne’s task was aided by a map found in Atzerodt’s room. Following the assassin’s escape route of escape, he took a steamer to Chapel’s Point, Maryland where there was a Union garrison. Booth and Herold remained at large. They rode to the house of Doctor Samuel Mudd who set Booth’s broken leg.

Throughout the war the Eastern Shore of Maryland provided a discreet, somewhat secure avenue to pass contraband items and intelligence to Confederate agents on the Virginia side of the Potomac River. Union troops patrolled the both shores and the Federal Navy patrolled the river seeking to disrupt the pipeline with varying degrees of success. With Lieutenant Lafferty, commander of the post, and twenty-five troopers, O’Beirne traveled to Port Tobacco, Maryland where Atzerodt owned a shop. Here an acquaintance of conspirator provided where he could be found. O’Beirne wired Washington that Atzerodt was hiding at his uncle’s house in Montgomery, Maryland. He was quickly captured. Also arrested was Doctor Mudd, not for conspiracy in the plot, but for aiding Booth by giving medical treatment and failing to report Booth’s presence at his home. 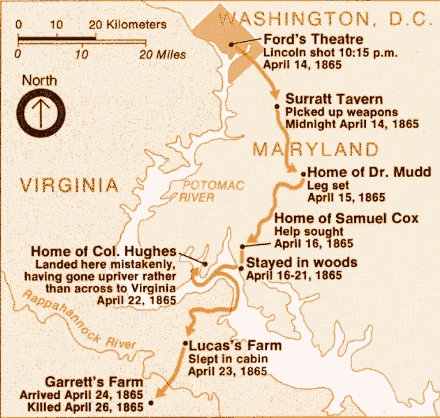 An exhaustive search of the countryside, creeks, streams, and swamps failed to turn up any trace of Booth and Herold. O’Beirne believed they had crossed the river into Virginia. James took a trooper of the Eight Illinois and crossed to the Virginia countryside along the Potomac. The remainder of his party proceeded to Port Tobacco, Maryland. Local legend has that one of O’Beirne’s detectives, Captain William Williams, offered a one hundred thousand dollar reward for information leading to the capture of Booth and Herold.  He had no takers it appeared.

Meanwhile O’Beirne developed further information that placed Booth and Herold near Prince George Courthouse. He proceeded thither and heard that Booth and Herold had come out of a strip of wood near the Turner House and spoke with a colored girl and asked for food. They asked if anyone was in the house and asked for water. The girl returned to them with a message to come up to the house. They declined and went back into the wood, moving toward the east. What to do?

As seen, O’Beirne believed strongly that Booth and Herold succeeded in crossing to the Virginia side of the river. But he could not ignore this tip. It must be followed up. This error ensured that O’Beirne would not reap the fame of capturing John Wilkes Booth. He had been within ten miles of Booth. The assassin and his accomplice were ensconced in a tobacco barn on the Garret Farm. O’Beirne paused to wire Stanton his findings and requested 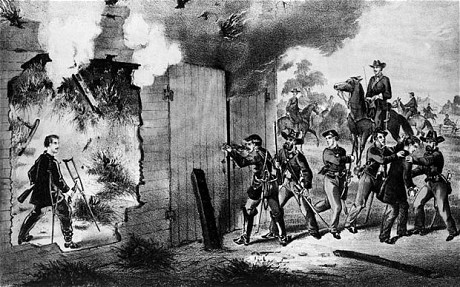 permission to search the Port Royal area. In reply O’Beirne was ordered to return to Washington as a second force commanded by Colonel Lafayette Baker would take over the operations. Baker’s party of the Sixteenth New York Cavalry discovered Booth and Herold in a barn located in Port Royal, Caroline County, Virginia on April 26th. Herold gave himself up. Booth, refusing to surrender, was shot and mortally wounded.

(Left: The killing of Booth by troopers of the 16th NY Cavalry)

O’Beirne had been an ace in capturing Booth. As he ran down the conspirators and their accomplices and developed the intelligence and kept Stanton informed with the intelligence that allowed Baker to reap the glory of capturing the murderer of President Lincoln, he set the stage for the conclusion of one darkest episodes of the tragic war that settled the original sentiment of the country “conceived in liberty”.