Last October we lost one of the finest historical artists in the United States when acclaimed sculptor Ron Tunison passed away at the age of 66. Ron was most well known for a number of Civil War monuments he sculpted. Among those are three that were especially noteworthy within the Irish-American community: His monument to the Irish Brigade in Antietam, his tribute to Cork born Confederate General Patrick Cleburne at Ringgold Gap, Georgia, and a bust of General Thomas Francis Meagher that was placed on the Wolfe Tone Club in his hometown of Waterford, where Meagher first flew the tri-color flag of the Irish Republic.

Ron was born in Richmond Hill, N.Y in December 1946. As one might expect, he showed great artistic ability early in his life, but it was wedded with a great love of military history. Two of his first artistic efforts were 5th grade drawings of Davey Crockett at the Alamo and Pickett’s Charge at the Gettysburg. Ron would go on to study in New York City at the School of Visual Arts in and National Academy School of Fine Arts. After school he made much of his living with another artistic talent of his, photography. He had photographs in both Look and Time magazine during the nation’s Revolutionary War Bicentennial and did cover photographs for Bruce Catton Civil War books and Francis A. Lord’s, “C.W. Collectors Encyclopedia, Vol.III.”

In 1980 Ron and several other artists founded “The Society of American Historical Artists” and his popularity as sculptor of historic subjects began to grow. In 1986 he got a commission for the first of the historical monuments for which he will surely be remembered long into the future; a statue of General Samuel Crawford in the area near Little Roundtop that is known as “The Valley of Death.” Ron would devote many working hours of his remaining years to an impressive list of Civil War monuments that includes “The Friend to Friend Monument” in Gettysburg in 1993; “The Irish Brigade Monument” at Antietam in 1997; “The Delaware State Monument” in Gettysburg in 2000; “The Bivouac: for The Museum of the Civil War Soldier at Pamplin Park, Virginia; “The Gettysburg Civil War Women’s Memorial of Elizabeth Thorn” in Gettysburg in 2002; and “The Patrick Cleburne Monument” at Ringgold Gap, Georgia in 2009. 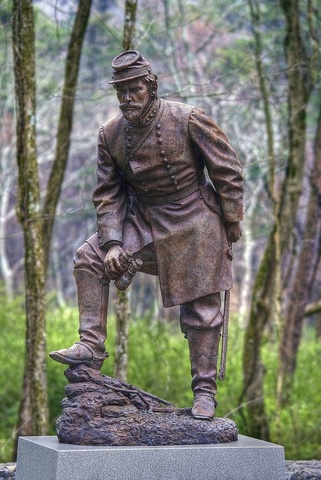 The unveiling of Ron’s monument to the Irish Brigade at Antietam battlefield in 1997 was a great day for everyone there, and for all of Irish descent who wish to honor the sacrifice of those ancestors who fought in that bitter struggle, and no doubt it was a great day for Ron as well. It some ways it was a magical day, as the beginning of the ceremony included a “fly-by” of a large V-formation of loudly honking Canadian Geese. No one in the crowd with a knowledge of the connection between the men who formed that Irish Brigade and the term “Wild Geese” (and that would have been nearly all of them) could have failed to get a chill down their spine at that moment. And Ron Tunison’s gorgeously sculpted bas relief monument, set in a 20 ton tablet of Grey Irish granite imported from County Wicklow, the last that will ever be allowed on the Antietam battlefield, was the centerpiece of that mystical day.

In 2009 Tunison had connections to two commemorations of Irish born Civil War heroes, one from each side. In June a copy of his bas relief of General Thomas Francis Meagher, commander of the Irish Brigade, from the back of Ron’s Antietam monument, was dedicated in Waterford, Ireland, Meagher’s birth place. In October his life size sculpture of Cork born Confederate General Patrick Cleburne (pictured at left) was unveiled in Ringgold, Georgia, site of one of Cleburne’s most famous victories against long odds.

One of the last works of Ron’s life also had an Irish theme. In May 2014 his base relief of Revolutionary War hero and Co. Wexford native, Commodore John Barry will be dedicated on a memorial to him at Annapolis, Maryland. This is long overdue for the holder of US Navy commission #1. He’s a man many consider the true father of the US Navy, and there is no one Ron’s friends in the Irish-American community would have wished to have sculpt that monument than him. We only wish he could have been there to see it unveiled.

In 2011 Ron gave a radio interview (linked below) about a presentation he was going to give at the local historical society. It pulls at one’s heartstrings to hear him speak about his interest in 150th anniversary commemorations, some of which he would not live long enough to see, but wonderful to hear him speak of his pride in the work he had done, work that will live on long after all of us are gone. It’s the world’s loss that we’ll see no more new work from him. Near the end of the interview he gives a statement that perhaps could sum up a life we would all love to live, but few are able to do. “Hopefully,” Ron said, “in the end it pays off and you make a living at doing something you absolutely love.” That is, indeed, what Ron did. Ar dheis Dé go raibh sé (May he sit at the right hand of God).

Cleburne: The Defense of Ringgold Gap

I had the great pleasure of re-enacting with Ron during the Civil War's sesquicentennial (125th anniversary) series. We've lost so many colorful and talented and deeply passionate figures -- Brian Pohanka, Ben Maryniak and now Ron. I mourn!