Kirwan: In Manhattan, Keeping Faith During the Hunger Strikes 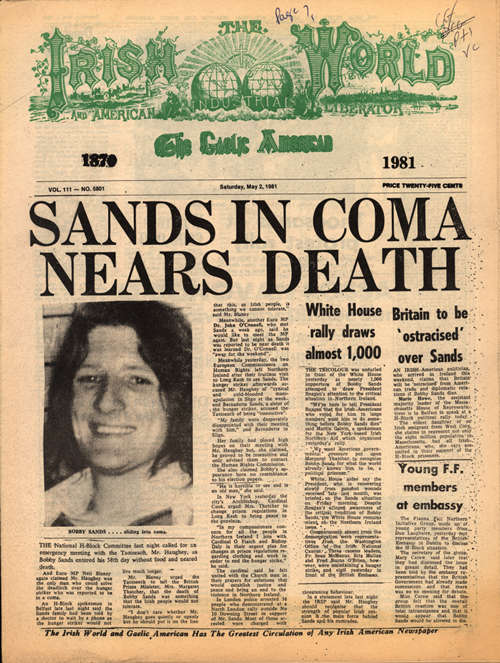 They came from all over the city, down by subway from Inwood, and the Bronx, over the bridges and through the tunnels from Queens and Brooklyn, or by ferry in from Staten Island.

They drove or took buses from Jersey, Connecticut, Upstate, Pennsylvania. They came from far and wide to make their views known and their voices heard outside the British Consulate on Third Avenue. They were far from chic, but they wouldn't even have been able to pronounce the word, for what's fashion when stacked up against conviction. They stood out like sore thumbs from stressed out, emaciated Manhattanites; they were rarely slim and most had never seen the inside of a health club. They had little need for tanning salons either, for their faces were wind-swept and sunburned, with worry and age lines etched deep from long days on factory floors or in delivery trucks. Many wore spectacles, their eyes clouded from the glare of the cheap overhead lights they worked beneath in offices and storage rooms. But whatever they looked like, there was always a quorum of them tramping up and down the avenue, often silent, but determinedly bearing witness.

They were mostly in their 40s and up. Few of the young stepped out with them at first; for it takes years and hard won experience to have memory of memories. These protesters were mostly second-, third- and fourth-generation Irish Americans; although many were descended from the survivors of 1847 who had never left the East Coast — never forgotten either, nor forgiven. More were the sons and daughters of Republicans who left in disgust after the Civil War defeat of 1923. They were joined by those who had fled the poverty of both body and spirit in the Ireland of the 1950's. Regardless, they were all part of the tribe, come to protest the imminent death, through voluntary starvation, of a young chieftain.

And make no mistake, Bobby Sands was a leader to these people, with more moral authority than any trumped up Taoiseach back in Dublin. But these craggy souls were hardly the types found schmoozing with Ted Kennedy or Hugh Carey at some Irish Consulate soiree. Not a lace curtain to hang between them, they were the faithful who kept the flame of Irish republicanism alive in the back rooms of smoky pubs at Sunday evening socials throbbing with the music of accordions, fiddles and banjos. These were the ones addressed and solicited by shadowy men from Belfast and Tyrone over on visitors' visas — the hard core who gladly forked out crumpled $20 bills in the hope that one day a united Ireland might become a reality, and not just another pipe-dream fueled by chasers of cheap beer and shots of Power's Whiskey.

Many recognized each other from conventions and other protests; some had even danced together in halcyon days out on the Irish Mile in Rockaway or at the Jaeger House Ballroom up on Lexington Avenue. For the circle was small, if committed and devout. An occasional well-known figure would stand out: an O'Dwyer, or a McCourt, perhaps, or some visiting musician, or up-for-election politician; but for the most part these activists were content with their anonymity. A couple of anarchists made the trek up from the Lower East Side, a few stragglers from Spartacus and other Trotskyite groups added muscle; and when the word spread, there were Tyrone boys aplenty and serious young women from Derry and West Belfast come to keep the faith. But it was the tribe that kept the flag flying in the early days.

They were an odd bunch: serious and cerebral by times, chatty and cliquish at others; but I liked them and admired both their integrity and their single-minded devotion to Irish unity. They had little use for pragmatism, and put even less value on the opinion of the media's scribes and talking heads; I suppose they reminded me of my Grandfather. One in particular even looked like him: white haired, squat and muscular with a face set in granite, conviction cased in steel, all his instincts tuned to the force of his own moral compass. They could be difficult, too, and were often hard to play for at their socials and fund-raisers. The flame of republicanism was all-important to them. If they heard or caught that in one of your songs, then they might turn briefly and acknowledge that you were indeed on the right path; but music was mere background to them. Always, eyes on the prize! And now they had a new focus. Bobby Sands was the man of the moment, and his clock was relentlessly ticking away.

It was as if they knew Bobby from birth, though few had ever met him. But they recognized his type: young Northern revolutionaries, up for the drink and a bit of craic, but deadly serious about the new world they would create when the Brits were finally sent packing. The tribe had met them at the Sunday evening socials, put them up at their houses, and kept their pictures on mantelpieces long after they'd gone home. And when these young men were interned, they wrote to them and sent Christmas cards and food parcels to the Kesh and other camps. They stayed in the homes of the young men, too, when they visited the North, and counted down the years until release with their wives, mothers and girlfriends. Bobby wasn't just a symbol to them: he was a symptom of 60 years of state-approved discrimination and sectarianism. They felt a fierce pride and protectiveness toward him. He was one of their own. That was the difference between them and their native-born Irish detractors. They still had the links with Armagh and Fermanagh, had kept the faith down through the black years of partition, unlike many of us in the South who had become apathetic from British and Free State conditioning.

Back during the Hunger Strikes, the British press sneered at them unmercifully. What else was new? Punch Magazine had depicted their ancestors as a bunch of thuggish simians. (Photo right, a trope on  Irish parliamentary leader Charles Stuart Parnell, from Punch, 1882.) Old habits die hard — old prejudices take even longer. Elements of the Irish press had also mislabeled them as naïve and easily led by Belfast gangsters. They all miss the point and the truth. What I saw on that Green Line outside the British Consulate was a folk memory and even a hatred brought roaring back to life. These people weren't misled. Far from it! Many of them were reliving the fears, anxieties and loathing of those who had been thrown off the land, discriminated against or denied a proper education, and who had eventually scraped up the fares to escape from a country that had abandoned them. These activists refused to forget; they were merely keeping the faith with their forebears who had sweated and saved their stray dollars to make better lives for the coming generations. They were the tribe and it was now their turn to give back.

And give back they did. There was a majesty to these people that was humbling. Day after day, they surmounted their own small identities by declaring that this travesty of justice, unfolding 3,000 miles away, should not be allowed to happen. Just as there was a majesty in Sands: a talented, but little-known, revolutionary who paid the ultimate sacrifice for a point of principle. And it was all so Irish, too, no matter what the media, British or Irish, pronounced. Sands had invoked an ancient tribal right: When wronged by your more powerful enemy, go sit on his doorstep and starve yourself until the shame causes him to relent.

Margaret Thatcher did not have the sense or the good grace to attempt a meaningful compromise with Sands and his comrades. No matter what one thought of the conflict in the North of Ireland, who could have denied that those prisoners had a political point of view and were pursuing it for political ends? That's what the hunger strike was all about; that's what the ultimate points of principle hinged on. And that's why the protestors lined Third Avenue every minute of the day for months on end, until 10 young men starved to death. And when it was over, Irish-America was not the same. A new generation had been politicized and would hand down a new folk memory to their children and the generations following.

Eventually, the protest became a cause celebre. The cameras showed up and so, too, did actors, politicians and all manner of celebrities; there they remained as the days counted down and Bobby, from his prison cell, won a great parliamentary victory. At first, we thought this might spare him: that the Iron Lady would surely see some sense, or offer a measure of compassion.

It was not to be. The heartsickness grew worse, the appeals continued but, finally, after 66 days of torment, Bobby Sands MP slipped into legend. The tragedy was only beginning. The comas, blindness and bone-sharp bodies of the nine others kept apace with a regularity that never became numbing, only horribly inevitable. And still, Mrs. Thatcher would not bend; indeed, she counts this travesty one of her finest moments. The poor woman. Her own party has already disowned her. History will judge her even more harshly.

In the end, the sacrifice became so horrible and other-worldly that many found it too difficult to keep on protesting at the Consulate. But the tribe never faltered or lost faith. Right to the bitter end, they came in by subway from Inwood, and the Bronx, over the bridges and through the tunnels from Queens and Brooklyn, or by ferry from Staten Island. They drove, or took buses, from Jersey, Connecticut, Upstate, Pennsylvania, and I will never forget them.

The above reminscence is excerpted, with Larry Kirwan's permission, from his 2005 memoir, "Green Suede Shoes: An Irish-American Odyssey."

This feature was produced by Joe Gannon. Copyright © 2011 by Larry Kirwan and GAR Media LLC.

This article may not be resold, reprinted, or redistributed without prior permission from the author. Direct questions about permissions to permissions@garmedia.com.

And now...in Maghaberry prison...Martin Corey sits incarcerated without trial.. Marian Price sits in solitary confinement...even after she was granted parole...twice

My friend, Gerry, was only just released...and that is a tentative release... after two years in Maghaberry

All had been living out in the open...confident that the tenants of the GFA would be adhered to...

Through it all ...THe Hungers Strikes of Bobby Sands time...the uprising of 1916...and today...American Irish have supported the fight...financially..vocally...proudly