On Memorial Day, This Vet Asks 'What Is A Hero?' 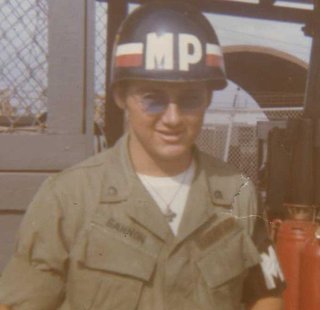 Reading the blog post by Neil Cosgrove about LCpl Patrick Gallagher , "Courage Worthy of the Foremost Recognition," and this being the day in the US where we honor those who died defending our nation, gave me pause to consider something that has become a pet peeve of mine. As someone who served in the US Army in Vietnam, and who has read extensively about the military history of the US and of the Irish in Ireland and other places around the world, I have listened with extreme displeasure as it has become more and more common for people to refer to everyone who served this country in a war zone, regardless of what that service may have entailed, as a "hero."

It seems to me that this habit began to enter common usage during the first Gulf War. Of course, the motivation of this practice was a noble one: to honor the service of all those who go off to war to serve our country. Each and every one certainly does put their life at risk in doing so, as every war zone is a dangerous place. One doesn't have to be on the front line carrying an M-16 in their hands to be said to have put their live on the line for our country. But is the taking of this risk for our country ALONE enough to justify the designation “hero?” I think not. Most of us do things every day that carry some risk, often voluntarily. Do any of us consider ourselves “heroes” for venturing out upon our highways, a very dangerous activity? The majority of our troops serve in support roles. Their jobs are vital, but under ordinary circumstances they don’t require heroic action by the soldiers who do them. When I hear someone called a hero, I’d like to know it means something more than having spent a year in a war zone.

country, obviously, since I’m one of them. I am proud of that service and I’m sure that most of you reading this who also served are as well. But if we are all heroes, then what in the world do we call people like LCpl Patrick Gallagher (right), who fell on a grenade to save his comrades, or Lt. Michael Murphy, the Medal of Honor awardee who’s incredible story was told in the film “Lone Survivor” or someone like WWII’s Audie Murphy? Would any of us who went off to war and were never asked to do anything remotely like what these men did want our service to be equated with theirs? If everyone is a “hero” for merely serving, then what superlative is left to describe these soldiers, and many others like them? They most certainly WERE heroes according to the original definition of the word, not this new, watered down version.

I was an MP in Vietnam. Could I have died there, certainly, but to compare what I did, or others whose service to this country was similar, to the men listed above, in my opinion, doesn’t honor us, it disparages the sacrifice of these very real heroes. And their sacrifice was truly the last full measure of devotion that a solider can give. So please, let’s reserve the designation of hero to those who truly have earned it. I am not a hero.

I appreciate this perspective, Joe. It articulates something I've believed for many years.

Joe, I think you are selling yourself short.  Per the Dictionary a Hero is defined as " a person who, in the face of danger and adversity or from a position of weakness, display courage  and the will for self-sacrifice—that is, heroism—for some greater good of all humanity. "  While I agree that there is a tendency to over use "Hero" (and similarly the word "Victim" as been unfairly stigmatized), I think anyone who served their nation  deservedly fits into the definition above.

As to Lt Murphy or LCpl Gallagher, they are examples of a greatness of spirit that transcends the ability of even words to describe and show the nobility that humanity is capable of.

I'd agree with you there, Neil.  The definition of a hero is far more broad than we might think.  I understand the sentiment of wanting to reserve that term for those who gave the ultimate sacrifice, but as Neil has said, it need not be limited to that.

Obviously, everyone is free to use the word "hero" as they see fit, but I don't see a problem in using it for anyone who has displayed unusual courage.  I think, in most cases, serving in combat is indeed heroic.

Now, calling an athlete a "hero" ... that's a different story.

Comment by Tom McGrath on May 30, 2014 at 8:46pm
Joe,
I totally agree with your position. I'm a bit older than you but share the same uniform. The word is losing it's true meaning and that is not defined in any dictionary, which are only authorities on spelling anyway. Everyone in a theater of conflict is not being heroic and in my opinion thinking that takes away the luster of the real hero's extraordinary action and selfless performance at the risk of possible death.
Semper Fi

Neil, we'll have to agree to disagree. If we call people like myself heroes we've devalued the word. Or we have to come up with some new word to describe those who demonstrate the extraordinary courage of people like  Lt Murphy or LCpl Gallagher.