Honoring Those Who Saved Washington's Army 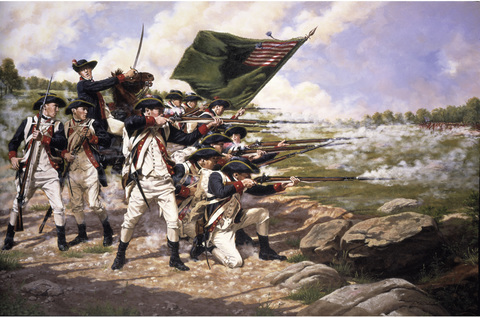 It has been said that the Declaration of Independence was signed in ink on July 4th, 1776, in Philadelphia, and was signed again in blood on August 27, 1776, in Brooklyn.

(Left: The Delaware Regiment at the Battle of Long Island.)

Though little is left to remind us, Brooklyn hasn't forgotten, in no small part, thanks to the efforts of some of the borough's Irish-Americans.

Joining with the Michael J. Rawley American Legion Post #1636, on Saturday, Aug. 18, the Irish American Parade Committee is conducting the opening ceremony for "Battle Week," which the organizers are calling the largest annual commemoration of the American Revolution anywhere.

It seems an appropriate way to remember the Battle of Brooklyn, fought on Aug. 27, 1776, the largest battle of the American Revolution.

Want to find out more about the this battle? Follow the link to Amazon.com and buy John J. Gallagher's:

The Battle of Brooklyn, 1776
(A portion of your purchase price will help support "The Wild Gees...

The ceremony will also recall the heroism of one of Washington's Irish-born generals,Brevet Major General Edward Hand. During the battle, Hand and his regiment, the First Continental (Pennsylvania), serving in a wing led by William Alexander, delayed the British advance up the Shore Road.The 10 a.m. ceremony will honor the Maryland 400, whose supreme sacrifice enabled Washington and his army to escape Brooklyn and cross the East River to Manhattan to fight another day.

John O'Malley, a descendant of two Revolutionary War veterans, will speak at the ceremony.

Also on Saturday, at 1 p.m., there will be a 225th anniversary re-enactment of the Battle of Brooklyn, starting at the north end of Prospect Park's Long Meadow, proceeding down Third Street and climaxing with the siege of The Old Stone House at 5th Avenue and 3rd Street.

For the following 12 days, the borough will be hosting walks, talks and events commemorating the battle.

On Sunday, August 26, the commemoration moves to Green-Wood Cemetery, for a remembrance ceremony at 11:30 a.m. at the grave of Matilda Tone, the widow of executed Irish martyr Wolfe Tone. (Meet at the cemetery entrance, at 5th Avenue and 25th Street at 11:15 a.m.)

At 12:30 p.m. in the cemetery, perhaps the city's most beautiful, there will be an unveiling of a plaque honoring Derry-born John Haslet's Delaware Regiment, which fought alongside the Maryland Regiment. At 2 p.m., the organizers will hold its annual "Altar to Liberty" ceremony at Battle Hill.

The 1776 Battle Week is coordinated by the Old Stone House Historic Interprative Center and the First Battle Revival Alliance. For further information, call 718-499-9482.

For additional information on the Battle of Brooklyn, and the Irish who commanded there, visit:

The Battle of Brooklyn, from Brooklyn Online

"Maryland’s Brave 400 at Long Island", from National Society of the Sons of the American Revolution

1st Delaware Regiment – Sons of the Blue Hen & Game to the End!