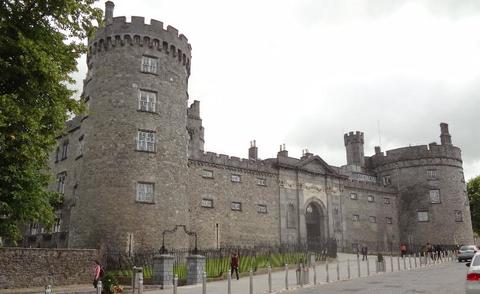 My family visited Wexford in June of 2008. We rented a car while in Wexford and on the second day drove out to see the Jamestown House Stud Farm. My ancestor Joseph Gray built the house at the farm in 1811. Another Gray house is located at Whitefort. The ruins can be seen on the website of Tarquin Blake, "Abandoned Ireland." We enjoyed driving around Co.Wexford to view the country side and also the historical sites. After only three days we had to leave and took a bus to Killarney. There we met up with our friends and continued our trip through Ireland.

Capt. Joseph Gray was a member of the Yeomam Cavalry in 1798; later a Captain in the Wexford Militia and a Magistrate. Thomas Gray was also a Captain in the Wexford Militia in 1798. The younger brother was Nicholas Gray, an Attorney at Law. I have been researching Nicholas for a number of years and was fortunate in finding the research of Mrs. Patricia De Bernardi, who was a genealogist. Her research is included in an article written by Sir David Goodall " A Divided Family in 1798: The Grays of Whitefort and Jamestown". [Journal of The Wexford Historical Society 1994-'95] 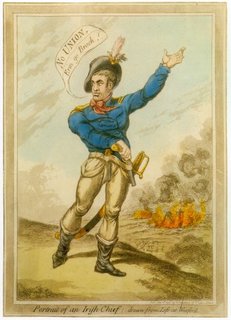 Nicholas was the Secretary to the Rebel Council of Wexford and also was Aide-de-Camp to Beauchamp Bagenal Harvey (seen right in a political cartoon) in 1798. Nicholas had a close association with Robert Emmet and was appointed leader of the troops of Co. Kildare in the 1803 Rebellion. In a document dated 4-7-1799 Gray was imprisoned at Wexford Goal for administering an unlawful oath. In another document dated 3-16 -1804 he was imprisoned at Kilmainham for treasonable practices and being involved in the rebellion in Co. Kildare. Nicholas Gray was spared from execution due to family connections. We visited Kilmainham on our trip to Ireland in 2008.

Nicholas Gray had to flee Ireland due to his rebel principles. When he arrived in America he had little money and no place to live. Gray states in a letter to Mr. Patten, "The great and good Mr. Emmet [Thomas Addis Emmet brother of Robert Emmet] has released me out of my difficulties and has been a father to us since the situation I now have obtained is through his interest. I am an officer of the state and hold my situation under the supreme court."

Nicholas Gray became the private secretary to Governor Daniel D. Tompkins, who also became Vice President. Nicholas served briefly with the New York Militia as an engineer. He also was Inspector General of New York 3rd. District. His son served as a Midshipman in the Navy during the War of 1812. Nicholas survived the rebellions in Ireland to once again fight the British in the War of 1812. In this war he would also be fighting against his follow Irish countrymen. In a letter Governor Tompkins states: The Governor's Secretary, detailed to Assistant General Wadsworth in a Staff Capacity Albany, July 6, 1812. "Mr Gray has seen service in Ireland in the capacity of General of Brigade and has made Military science his study. He is a gentleman of respectable family and amiable character." In letters written by Governor Tompkins to American officers Gray is described as a man of modesty, information and amiable deportment. You will find him a good Engineer and Artillerist. He likewise sketches well and is well qualified to Organize the staff.

(Left: an image that is believed to be that of Nicholas Gray.)

Nicholas Gray supervised the construction of several batteries on the American side . One of the batteries was named Fort Gray, in his honor, located at Lewiston and with two 18 pounder long guns which helped support the American crossing of the Niagara River during the Battle of Queenston Heights on October 13, 1812. Lieut. Colonel Gray commanded the artillery.

During the months of July, August and September of 1812 Nicholas Gray made a survey of the whole Niagara Frontier. On August 31, 1812 Gray notifies General Van Rensselaer about the combustible telegraph located on the Canadian side of the Niagara River. In a letter to Mrs. Codd of Buffalo, New York [A relative from Wexford, Ireland] he writes "I sleep every night almost at the muzzle of the British Cannons.”

Nicholas was an effective recruiter of new troops and held a command in the line on the frontier under General Smyth. This is taken from Military Society of the War of 1812 - 1895. "After inspection of the troops by Col. Nicholas Gray, Inspector General U.S.A. was honorably discharged from Military service of the United States Army on December 3, 1814, with the thanks of Governor Tompkins." On March 30, 1814 Nicholas Gray was appointed register of the land office in the Mississippi Territory. He was assigned to the district west of Pearl River, with its land office at Washington near Natchez. " In 1816, former governor Robert Williams (right) attacked the land register, Nicholas Gray, in his office with a knife. But Williams forgot to take the knife from its sheath, just bruising Gray." [This is taken from “Arming America” by Michael A Bellesiles]. Ex Governor Robert Williams had invested heavily in land and had accused Nicholas Gray of favoritism towards his friends.

Nicholas Gray suffered from what was described as consumption. His harsh treatment in Kilmainham and Wexford Goal prisons had created health problems. His life in America was not always easy or comfortable. None the less, he states in his letter to Mr. Patten, "I should prefer slim visage and empty pockets here, than full ones and fat cheeks in the martials." Nicholas Gray, after living a truly adventuresome life, died in 1819, at the approximate age of 45.

Nicholas Gray Jr. also worked in the land office and was a surveyor. Nicholas Jr. purchased land in Vicksburg on August 1, 1837 from T.H. Goodall on which he built the "Wexford Lodge" [Named in honor of Co.Wexford, Ireland]. It is located in the "Vicksburg National Military Park”. The only structure in the park to survive the battle of Vicksburg. Nicholas Jr. along with his family moved to California in the 1850's were he became a U.S. Deputy Surveyor. His son Emmet Gray was the Tide Observer at Sausalito, Bay of San Francisco for 25 years.

Loftus Crosier Gray was my GG grandfather and enlisted for the Civil War August 19, 1862 at Troy, Kansas. Loftus was in Company B, 13th Infantry Regiment Kansas. The inscription on his tombstone reads “Sacred to the memory of Loftus C. Gray Veteran of late War, youngest son of Capt. Joseph Gray and beloved husband of Mary Gray, Born in County Wexford, Ireland, April 13, 1813. Died at Crescent City, Ca. December 5th., 1897.”

Sir David Goodall has published an article in The Past "Organ of the Ui Cinsealaigh Historical Society" No. 31, 2011 - 2012 Edition. The tittle " A Postscript To 1798: Nicholas Gray and His Family In America."