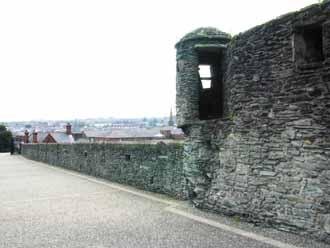 Staying overnight in Derry, Grant spent the next day looking at the city's historic walls, and the "Roaring Meg" cannon. He and his party then headed for Belfast.

(Right: The walls of Derry City.)

En route, workers and other spectators waited in the rain and snow at various points to greet the ex-president, Young noted. A huge crowd gathered in Coleraine, where Civil War veterans from both sides approached Grant—one said the general's forces had captured him at Paducah, Kentucky; the other asked for money. Grant's reply was not noted.

The next day, a correspondent from The Coleraine Constitution observed the visitor debarking in Belfast: "He is a man of robust build and short stature, with keen glancing eyes and determined expression, his facial features giving a good index to his character. A cheer burst from the crowd the moment he was discerned. ..."

The Belfast Telegraph, as descriptive as it seemed to be mindful of potential advertisers, named the local businesses—and their owners—that decorated their buildings in honor of the visit. Back in the United States, The Associated Press noted that orange flags were among the decorations.

In addition to Harland & Wolff, in Belfast, Grant visited mills and linen and stationary factories, and a jewelry exhibit during the short stay.

The Saturday Review took a humorous but skeptical view of the visitor: "There is something odd in the idea of a solitary Ulsterman coming up to the carriage window ... and yelling 'Three cheers for General Grant,' proceeding to give them all by himself. So there is, too, in the inquiry overheard by a correspondent, "Who is this Grant anyhow?" and in the answer, true if inadequate, 'I believe he fought in the American war.'"

The newspaper, like others, was disappointed that Irish officials seemed unable to draw Grant out on various issues, particularly trade. They were discovering what Americans had known for some time: that Grant kept his cards very close to his chest, unless he was fully confident in his knowledge on a subject, or at ease in private.

The Grant party headed back to Dublin for the mail ship out. More crowds greeted him at Portadown, Dundalk, and Drogheda. At one point, a small girl asked Grant "give her love to her aunt in America" eliciting "considerable merriment" from the crowd, Young wrote.

Grant sailed January 8, heading south to Marseilles en route to India. He arrived back in the United States from Japan in September 1879, and came close to a third presidential nomination in June 1880.

There have been subsequent reminders of the ex-president in Ireland. In 1907, the immense steamship christened the President Grant was built at the Belfast shipyard he had visited; and the Grant ancestral homestead in Dungannon, in County Tyrone's Clogher Valley, was recently restored, offering tourists a glimpse of Grant's Irish ties as well as 19th century life in rural Ireland.

In Dublin's City Hall on his first day in Ireland, Grant stood and spoke, in part noting: "I am by birth a citizen of a country where there are more Irishmen, either native born of the descendant of Irishmen, than you have in all Ireland. I have had the honor and pleasure, therefore, of representing more Irishmen and their descendants when in office than the Queen of England does."

The ever-feisty Freeman's Journal sniffed about Grant's remarks that night, "His tongue was not as effective as his sword." There's no evidence that Grant ever saw the comment, but, for the record, he never returned to Ireland. WGT

Copyright © 2004 by GAR Media LLC and the author. This article may not be resold, reprinted, or redistributed for compensation of any kind without prior permission from the author. Direct questions about permissions to permissions@garmedia.com.

This page was produced by Joseph E. Gannon.

READ MORE ABOUT ULYSSES S. GRANT AND THE IRISH

This page was produced by Joseph E. Gannon, with research assistance from Frank Scaturro and Gerry Regan.

Copyright © 2004 by GAR Media LLC and the author. This article may not be resold, reprinted, or redistributed for compensation of any kind without prior permission from the author. Direct questions about permissions topermissions@garmedia.com.

Join Ben Kemp, Outreach Coordinator at Grant's Cottage, for an interesting look at Ulysses S. Grant and his relationship with the Irish.

Mr. Kemp will provide a concise history of the Irish in the Civil War with an emphasis on the Irish Brigade Further, he will explore Grant's trip to Ireland in 1879, after his Presidency.