Last week, owing to the confluence of three events -- a massive head cold (no fever), our COVID-19 pandemic quarantine and the Lenten season -- I determined to watch a Netflix spiritual documentary, “Jesus: Countdown to Calvary,” a 53-minute 2018 video, directed by Gerry Hoban and starring Hugh Bonneville, the "Downton Abbey" star, as narrator and interviewer. The documentary focuses on the last week of Jesus’ life, exploring some of the actual biblical locations while attempting to recreate the military, political, religious and national dynamics along with the healing, itinerant preacher’s influence over the Jewish nation and Roman Empire.

The documentary does an adequate, if not commendable, job conveying how the divergent and, at most times, opposing entities of Roman Governor Pontius Pilate, Jewish high priest Joseph ben Caiaphas, and the huge influx of people that flocked to Jerusalem during Passover all converge to find an explicit mutual interest for Jesus’ death. Intent on preserving the status quo for both the Jewish temple’s hierarchy and local Roman rule, these twin "powers that be" were able to leverage the combined population of resident Jews and visiting worshipers to carry out and fulfill the prophecy of messianic scripture.

Like any documentary, evidence of bias is natural in not only who gets interviewed but also how the interview is presented and this, of course, is ultimately subject to the interpretation of the audience. And while reviews of "Countdown to Calvary" were mixed, I found the case made plausible, understanding the artistic license given -- except for one. One very critical item that may seem irrelevant to the average Christian was stated by Hugh Bonneville near the documentary's end -- that "asphyxiation" caused Jesus’ death.

Thinking back, many of us have heard this before. During a CBS interview by Nora O'Donnell with Bill O'Reilly, author of "Killing Jesus," on "60 Minutes" on Sept. 27th, 2013, Mr. O’Reilly indicates “suffocation” was the cause of Jesus’ death, given the best available evidence. Nothing could be further from the truth, however. Given baseball batting standards, Bill O’Reilly should be glad to know he is comfortably batting well over .500, as it is clear, from available evidence, that the two thieves alongside Jesus on Calvary did die of suffocation. The difference between these deaths and Jesus’ is as pronounced as it is profound.

So what does Jesus’ cause of death mean to a non-Jew?

Perhaps not too much, as what seems most important, in spiritual terms, is His resurrection, the gift of the Holy Spirit just prior to his ascension into heaven, and the start of His Church on earth. True as this is, something is being overlooked here. What does Jesus’ cause of death mean to our Jewish brethren? It is significant, particularly when those followers of Jesus accept what can only be described, in Jewish terms, as an invalid holocaust under the Law of Moses. Accepting asphyxiation as the cause of death renders Jesus’ sacrificial offer, according to the Old Testament’s covenant, as unclean, separating him from his kinsmen. In short, if asphyxiation of an ox, sheep or goat presents an unclean holocaust to the Lord, under the Law of Moses, then such a means of death would separate the slain Jesus from his kinsmen and, ultimately, the Lord.

So how did Jesus die -- a look at the record

How then could it be remotely possible for Jesus’ death to come from such illegitimate means under the old covenant if the new covenant is the fulfillment of the former (old covenant)? Remember, both the holocausts of the Old Testament and the holocaust of the New Testament are being made to the same “I am,” Almighty Lord, creator of the universe and mankind in it, that is, our heavenly Father. Would the Lord’s physical criteria here somehow change between covenants or will they remain consistent? Let’s apply a little thinking to our Bible passages here confirming the Almighty’s guidelines for acceptable holocausts or sacrifices.

The quote above is from the Almighty as written by Moses. As atonement is common to the Old and New Testaments; loss of blood is the common means by which atonement is achieved as established by our heavenly Father in the Torah. 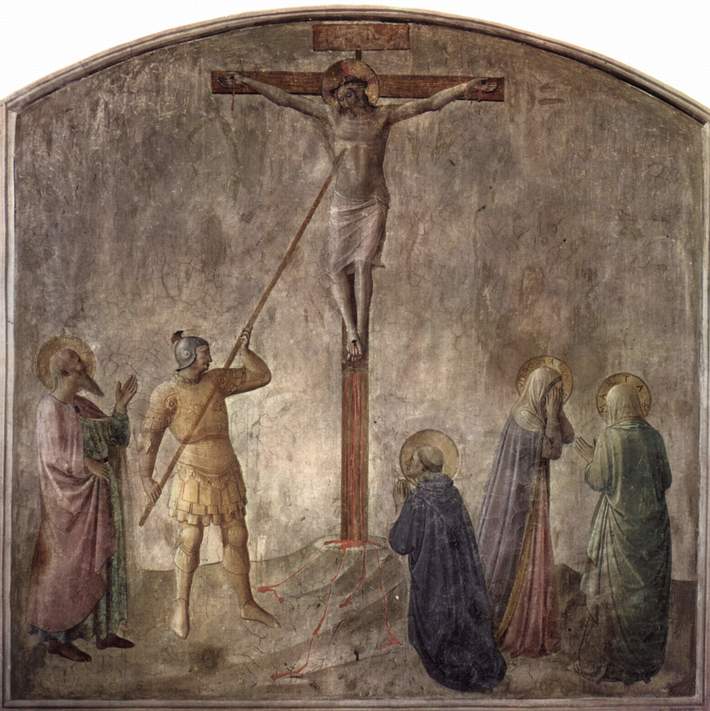 The quote above is from the Almighty, as written by Moses. There are two major elements here. The first, as the man, Jesus, is a living body, the sacrifice of his life according to his heavenly Father can only be acceptable through the loss of blood as, again, blood begets life and blood begets atonement. These are supernaturally intertwined, inseparable and physically necessary for a valid holocaust before the living God. The second is this: The sacrificial blood is reserved for God alone in the Old Testament, while under the new covenant both Jesus’ body and blood are now given to man to bring eternal life. The constant in the Old and New Testament sacrifices are the loss of blood of the body to achieve atonement, while in the new covenant two new things occur: one, God humbles himself becoming man and, two, man is elevated to eternal life with God through expansion of the holocaust, that is, man can now participate at the table of life by sharing the body and blood of the Messiah. Critical to God’s followers is knowing that God pursues man in both covenants and sets forth the conditions of sacrifice and participation necessary for atonement in each.

Above, a fresco by Fra Angelico, Dominican monastery at San Marco, Florence, showing the lance piercing the side of Jesus on the cross (c. 1440)

Written by King David. The two thieves had their leg bones broken to hasten their death as their diaphragm would collapse without their ability to stand, causing their death by asphyxiation. This is medically true, physiologically true and biblically consistent. Here the thieves were, in one instance, alive. Then their legs were broken by a Roman centurion to hasten their death by asphyxiation -- unable to support their bodies to breath, the diaphragm collapsed preventing them from taking another breath. It was moments after their legs were broken that they both expired. Here, Mr. O’Reilly is “dead on” target with his suffocation assertion. According to Scripture, Jesus had already expired by the time the thieves' legs were broken -- and to some, this leaves open Jesus’ cause of death. Certainly, asphyxiation via broken legs can be ruled out because no bones were broken. But how is asphyxiation ruled out for Jesus all together?

There are many interpretations of this verse. The key words here are “stripes” which are alternated for “wounds” or “bruises,” as any of the three of these relate to being “healed," as healing in the spiritual sense (from sin) is atonement. That is, the link between blood and atonement finds its way onto Isaiah’s passage, particularly if we apply the interpretation of “wounds,” as these are the causes for loss of blood. The scourging, piercing of hands and feet and the crowning of thorns -- all were causes for loss of blood. Under the Law of Moses, asphyxiation invalidates the sacrifice for atonement before God. Of the many scriptural passages, particularly from Leviticus but present here too in Isaiah, the practice of loss of life through blood loss according to the Law of Moses carries on today (unlike other practices such as stoning) in the slaughtering for kosher foods. The piercing of Jesus’ side by the centurion is exempt from cause of death because this occurs after he has given up his life, yet it is critical in confirming a perfect holocaust to the Father as the combined water and blood that runs from his side empties Him of remaining blood and fulfills His prophetic words to the Samaritan woman at Jacob’s Well, that Jesus is the source of flowing water that gives life eternal. The forensic medical explanation is the piercing of the pericardial sinus, while the flowing of blood and water from the spear is generally accepted as miraculous. Would Jesus, a Jew, allow for his death by asphyxiation?

The quote above is from Jesus, written by the Apostle John. Jesus spent his full ministry performing healing miracles that, according to medical standards of the day and even today, defied, or, perhaps better said, “perfected,” the natural laws of medical biology. The error in suggesting the cause of death by asphyxiation comes from the  nuance of the hypostatic relationship between Jesus' human and divine natures; that is, Jesus was concurrently fully human and divine. Focusing on his human nature alone, one could see how arriving at this false conclusion was possible. However, owing to his divine nature, we focus on one key word, used twice, in the passage above that is ignored in the asphyxiation assertion: “power.” So to deny Jesus’ death by blood loss is to deny his very words acknowledging divine power surrendering unto the Father the perfect holocaust of his life. This is the command given to Him directly by the Father and executed in perfect obedience -- all in accordance with the Law of Moses as the Father established.

The above quote is from Jesus, as written by the Apostle Matthew. There are two key parts here that lead us to a surprisingly, very hopeful place in demonstrating Jesus’ love for his Jewish brethren. In truth, we own our history, imperfect as it is, and this history becomes a reminder to improve ourselves in the “here and now.” Second, such harsh words for Jerusalem might suggest Jesus is giving up hope for the very people that his heavenly Father selected among all the world’s peoples. Quite the opposite! What better “cruel to be kind” demonstration of Jesus’ love is there than Peter? Imagine being told in one instance that the rock upon which Jesus’ Church will be built will be Peter, then later being chastised for speaking for Satan himself when Peter suggests Jesus avoid the destiny of his death on the cross? And again being told Peter would deny Jesus three times. Peter miserably failed and wept in his weakness. Both recriminations indeed were harsh, yet Peter is the epitome of graduating, with honors, from “the school of hard knocks,” holding a unique place in the Church’s foundational history precisely because, like any foundational rock, it needed first to be hewed to fit the divine builder’s loving purpose.

The above quote was uttered by Jesus, as recorded by the Apostle John. Today we are still, as the generations before us were, so much smoking flax. Meek is the Lamb who will not quench it. Rest assured, many who live in Jesus’ name only but do not love will miss the mark of heaven and still others who have not Jesus’ name but love will find paradise with the Lord. We will stand before the Lord with a book in our hands. And this book will be the book of our life, each day having a page, each hour having a paragraph. Then the good Lord will ask us to turn to the pages where we loved. May many such pages and paragraphs be found therein, but, if not, may the last sentence of the last paragraph of the last page be like that of one particular thief on a cross. Have a blessed Passover. Have a blessed Easter. And may God bless those who celebrate other holidays or none at all -- as we are all His children.