I have been asked many times about Galway, a city in the west of Ireland that I once called home, but I say nothing, not knowing where to begin. But the passing of a dear friend shed some light on my dilemma, and I now know just where to start this love story.

On my first visit to Ireland, I was an 11-year-old girl. My father had rented a thatched cottage on the outskirts of Tuam, a small town about a 20-minute drive northeast of Galway. Tuam had, and still has, charms of her own, shown to me by our landlord’s daughters, who were close to my age. At the time, I knew of only two roads out of Tuam, one being the Dublin Road and the second the Galway Road. As Dublin was several hours away, clear across the country, going out for a day-o usually meant goin' to Galway.

Setting out on the Galway Road, I would first watch for the ruins of an abbey, mysteriously striking to a girl from the outskirts of New York City. These remains are still there, and to this day, when I see them, it is as if I were 11 again. As the car traveled on, approaching the city itself, small storefronts would start to appear. One shop that I vividly remember seeing through the car window sold sheepskin blankets, leather belts, bags, and pocketbooks, some of which were decorated with pony skin. I was in that shop once and held one of these bags, running my hand over the pony skin. My father asked if I wanted one, and I shook my head no. There were two lovely ponies in the field beside our cottage that I had befriended. Unlike the abbey ruins, that shop is no longer there. But I digress. 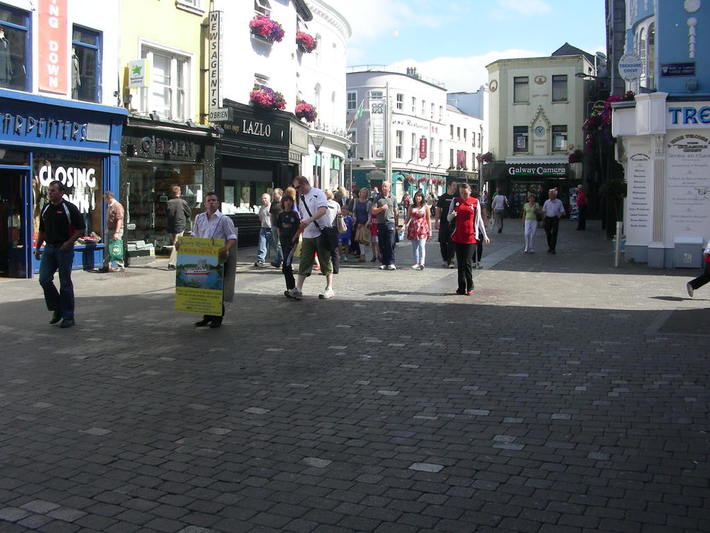 A trip into Galway with my father usually included shopping for gifts to bring home, some groceries for the cottage, and then a very good meal at the Claddagh Grill, which was at the top of the Great Southern Hotel in Eyre Square. It was here I got a good long look at people who stayed in nice hotels when they traveled and it was here that I decided I was far better off in the cottage, and by the end of lunch, eager to return to the bog, the ponies, the long bike rides past the blacksmith and down wandering country lanes, ending in evenings with a pot of tea by the turf fire.

But the 11-year-old girl grew into a 16-year-old girl, as did the landlord’s daughters. The charms of Tuam were not enough to hold us there, for in Galway, most especially in Salthill, aka the Irish Riviera, there was music and dancing every night of the week. We would walk up to the Galway Road, putting our thumbs out to hitch a ride to this Irish Riviera, where we would dance the night away. Somehow, we found a lift home in the wee hours of the morning, only to get up the next day, and do it again. I was hooked.

The next summer, the landlord’s daughter was working at The Great Southern as a receptionist at the indoor pool and I managed to land a job waiting on tables at the Galway Baking Company (GBC) cafe in Galway. My parents thought me in good hands with her, her parents thought her in good hands with me. And we were, but only sort of. I had to feign an Irish accent to land the job, and cast aside my American clothes for Irish threads to fully assume the new me. But it worked.

It was a few years later, in my university days, that Tony Small, born and raised in Galway, was a flatmate of mine in London along with two other Galwegian lads . . . all musicians. The lads would do their gigs in the pubs on weekend nights, with me tagging along, returning to the flat around midnight on the last bus home. Tea would be made, and once we were settled, Tony would pick up his guitar and sing his songs about Galway. And we would listen, allowing ourselves to be temporarily transported back to the place we really wanted to be, but life had taken us elsewhere.

My life eventually took me elsewhere again. But one day, some 30 years on, one of those lads kindly put into my hand a CD by Tony called, simply, "Galway." Some songs are his, while some are written by others and sung by Tony. Each and every one addresses Galway. When I got home the day I received the CD, I got myself alone with a CD player and earphones, intently listening to each one. I listened as if in a trance, for the lyrics delivered in Tony’s hauntingly beautiful voice temporarily transported me back to this place I have missed so dearly all those years.

I have not been able to listen to this CD for a while now, as Tony passed.  But after being asked again about Galway the other night, I came home and pulled the CD out of the dark corner where I had stashed it when I heard of his passing. I put it on and listened, entranced once more.

We leave the homes our parents lovingly made for us only to quickly find ourselves searching for our own. The Irish are great travelers . . . They know all about these life journeys. This is why there is no such thing as a stranger in Ireland -- all receive that warm Irish welcome. People return from a first visit to Ireland in amazement that they were repeatedly greeted as if they were long lost friends. As the Galway people opened their doors to me, Tony opened the love in his heart to all through song. I learned from them both to be generous myself with not only the key to my door, but also the key to the love in my heart, for it is only in this giving of ourselves that we receive.

Author's note: I have been unable to locate Tony's CD titled "Galway" on the web. If any reader knows a link where it is available, please send it on to me so that I can post it for interested readers. Thanks -- Susan