George Thomas: The Irishman Who Would Be King - Part 1 of 2 To say the prospects of children born into poverty-stricken Irish Catholic families in the 18th century were poor, with the Penal Laws still being used to oppress the Catholic population, would be a tremendous understatement. It was said then that the law of the British occupation government “did not presume a Papist to exist” in Ireland. No one at the time would have believed that a boy born to a humble tenant farmer near Roscrea, County Tipperary, would one day rule his own small realm on the other side of the world. But that, in fact, is the implausible and yet true story of George Thomas, the Rajah from Tipperary.

(Right: The only known image of George Thomas)

Some Catholic children at the time managed to get educated at hedgerow schools in the countryside. George was not one of them, and would remain unable to read and write in English his entire life, making his later accomplishments all the more implausible. George’s father, John, was said to be a great horseman and taught George to be one as well. This was a skill that definitely would benefit him in the future. Did his mother or father tell him tales of mythical far-away lands to fire his youthful imagination and inspire his later actions in life? Perhaps, but we’ll never know.

About 1776, as the American colonies were declaring their independence across the Atlantic, the 20-year-old George had lost both his parents. Rather than stay close to home and attempt to eke out the meager living of the common tenant farmer in Ireland, he struck out to make his way in the world. He traveled south to Youghal, County Cork, which was a major port at the time, and got a job working on the docks. The port town would have been filled with sailors who had seen all parts of the world. Perhaps their stories of far-away lands also helped fire the imagination of the young country boy, because sometime around early 1779 he went to sea on a merchant vessel. 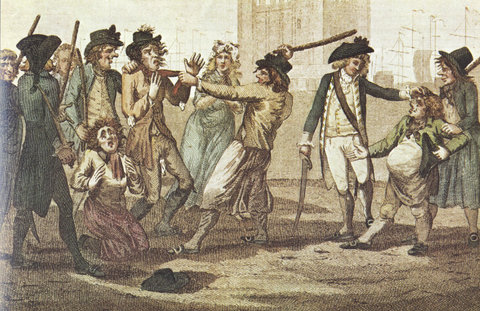 George was said to be a tall young man, over six feet, and between working on the farm, working on the docks, and the hard work on a sailing ship, no doubt George was developing into a strong and robust young man, as well. Strong young sailors like him were coveted by the British navy. Thus it was a year later in Bristol, England, he found himself in the service of the King. Whether he joined or was impressed, as was so common at the time, no one knows, but his later desertion might indicate the latter.

Discipline in the British navy was brutal in the 18th century, with numerous offenses calling for floggings of a various numbers of lashes. At the time it was said that a man in prison had “more room, better food, and better company,” so it’s not hard to see why the impressing of men was needed to fill their ranks, and why many of those impressed sailors would disappear at the first opportunity. Thomas ended up on a man of war in the fleet of Admiral Hughes, which was sent to contend with the French fleet of Admiral Pierre André de Suffren in the Indian Ocean. 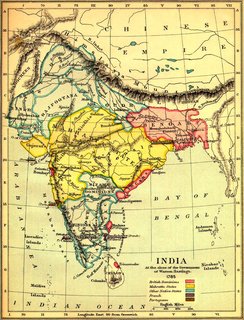 In 1781 Hughes fleet arrived at Fort George in Madras on the southeast Indian coast. This new land must have seemed bizarre and amazing to young George as he walked its streets. He’d have seen flashy colors everywhere, and thousands of strangely clad brown inhabitants chattering away in a peculiar language, and inhaled unfamiliar smells of many different exotic foods as he moved along.

One would think that a country boy from Tipperary would be overwhelmed by all this and be unlikely to want to desert in such a mysterious location, but he took his leave of the Royal Navy there. Perhaps he had heard tales from veteran sailors about opportunities available there. It was surely a brash and daring decision but, as his later history would prove, Thomas was an intrepid adventurer. And he would need to be, for India in the second half of the 18th century was a violent and fluctuating hodgepodge of roaming bands of bandits and large and small “empires” and principalities, which were in a nearly constant state of conflict. The continent was just then slowly being taken over by the British, who would use these contentious groups against each other.

In Madras, either by good luck or by asking around, Thomas met an Irish publican named Kelly, who was also from Tipperary. Perhaps trusting in their common origins, he told Kelly he was deserting and asked for his help. Kelly gave it, and the two became friends. On Kelly’s advice, the disenchanted sailor made his way to the southwest looking to join one of the Polygar chiefs in the Mysore region. The Polygars were ruthless local rulers who spent much of their time raiding their neighbors, which in many ways would describe all the various rulers, large and small, on that subcontinent in the 18th century.

(Below: Fort George in Madras)

Thomas could not speak their language, but European military men were coveted at the time in India. His military experience was limited but the Polygars wouldn’t have known that, and his excellent equestrian skills would have stood him in good stead. Large and small battles between groups and regions was nearly constant, so he would have acquired an enormous amount of experience in a short time ... if he lived, of course. He did, and also was proving himself to be a superb warrior in the pitiless close combat of the time. 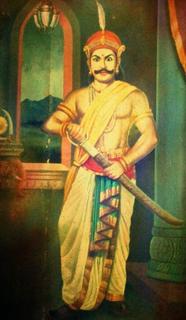 Little is known about how he spent those years with the Polygars. In the memoirs he dictated near the end of his life, he said little about it. It is known that sometime between leaving Madras and arriving in Delhi several years later, he left the Polygars and joined the army of the Nizam of Hyderabad, Ali Khan, further north. Thomas had learned small-unit cavalry tactics with the Polygars. Khan, who was a nominal ally of the British and the East India Co., had a larger army, including artillery and also had many English and French mercenaries. So Thomas’ military education would have continued and broadened there.

While he was with the Nizam, Thomas began to exhibit his leadership qualities, gathering about him a group of warriors known as Pindaris. The Pindaris were mounted warriors, some might say outlaws, who had been associated with the now disintegrating Muslim Mahratta (today usually spelled Maratha) Empire of central India. As Thomas increasingly earned their loyalty, he began calling them his “Irish Pindaris.” His previous history with the Polygars may have helped him understand and control these brigands.

In 1787 Thomas left the employ of the Nazim and traveled north to Delhi with his Irish Pindaris. There he met and went into the service of the Begum Somru, a woman. She was, in her own way, as remarkable as Thomas. Born into a poor family, perhaps in the Kashmir region of northern India, the teenage Farzana Zeb un-Nissa became a nautch (dancing) girl. In her mid-teens she met a powerful European leader of a large mercenary army, Walter Reinhardt, known as Sombre (Gloomy), 45, who fell in love with her. By all accounts he was a brutal and unscrupulous man in most circumstances, but Farzana, who was under 5’ tall, was able to tame him. She married him, or at least began living with him. It was said she “soon supplied most of the brains of the Sombre Reinhardt’s force; and what she decided was best to be done was accepted as law by her lord and his henchman.” (Right: The Begum Somru in her later years)

Amazingly, when Reinhardt died nine years later, the pint-sized young woman took over rule of his lands, Sardhana, and command of his mercenary army. She took the title of The Begum Somru. As unassuming as she was physically, she must have been extraordinarily tough mentally to accomplish this leadership over a group of vicious European mercenaries and Indian warriors.

The Begum was about 40 when Thomas came into her service, but apparently still attractive to men, and still interested in European men herself. She had also converted to Catholicism. It is likely that she and Thomas entered into a romantic relationship, in addition to his duties in her army, commanding her artillery. Thomas had no doubt learned to speak some Hindustani by then, and now he became fluent in that language and Persian as well, perhaps tutored by The Begum. He became literate in both, as well, though he was still not in English.

The fading Mogul Empire still controlled a part of northern India and The Begum served the Emperor Shah Alum. In 1788 at the Battle of Gokalgarh, The Begum, who often accompanied her troops into battle, and Thomas, led a charge that saved Shah Alum’s army from defeat and himself from capture. Here and in other battles in the Begum’s army, Thomas’ reputation for personal bravery and brilliant tactics was demonstrated and word of it spread among both Indians and Europeans.

(Below: The Begum Somru atop her elephant leading her army to battle, from a mural circa 1800. The scene depicted
is probably The Begum on her way to participate in the Battle of Gokulgarh in 1788 alongside the Mughal emperor.) 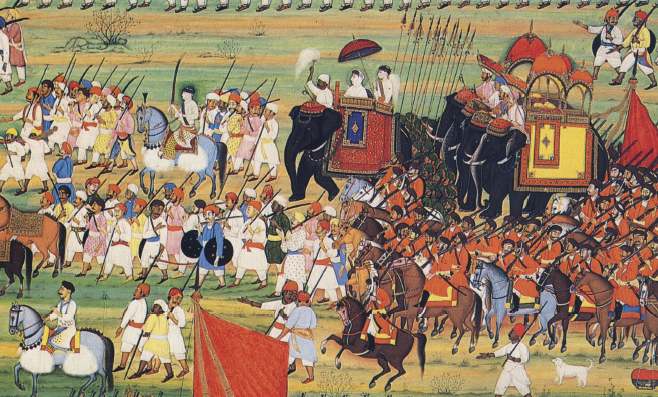 Shah Alum showed his confidence in The Begum by putting her in charge of defending the northern Mogul border, where the Sikhs were pressing him. She in turn gave the job to Thomas, his first time in independent command of a large force. She also put him in charge of administering the region, giving him experience with governing a region.

Over the remaining years of his life, Thomas would become the nemesis of the Sikhs, beating them in battle time after time in the area of the Punjab, earning him the name Jehazi-Sahib (His Honor the Sailor) in the region. His reputation as a fearless warrior also grew. While he was fighting for The Begum, however, other European officers in her employ were plotting against him. One of them, a Frenchman named Levassoult, turned her against him, and eventually married her. And so, in 1792, Thomas left her service but not alone. He now had a personal following of perhaps 100 or so loyal soldiers, in addition to his remaining Pindaris.

With his reputation as a great general, and a small but elite fighting force following him, Thomas soon had a Mahratta prince, Appa Khandi Rao, offering him employment. With Rao’s resources, and applying Thomas’ energy and charisma, recruiting was boosted and soon they had a formidable army. He was allowed to raid and increase Rao’s territory, and Thomas saw that it included raiding into The Begum’s domain. It was a “lover’s quarrel” on a grand scale. At one point The Begum laid a trap for Thomas and had him and a small band surrounded and outnumbered, but against all odds he fought his way out, further enhancing in the region the legend of his invincibility.

Thomas was also starting to understand the complicated intricacies of Indian politics enough to begin to formulate a plan to be more than just a mercenary. The day was coming when he would put that plan into effect. "The Rajah from Tipperary" Hardcover by Maurice Hennessy

Rajahs of the Punjab

Our Indian Empire: Its History and Present State

George Thomas - The Rajah from Tipperary - Taken from The Calcutta Review No. CXL (1880)