From the Turf to the Surf 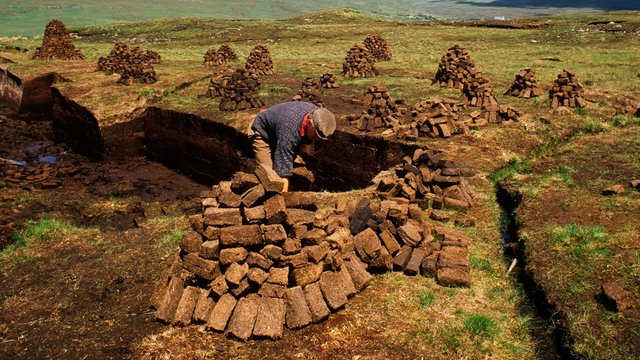 (My dad was a lorry driver for Bord Na Mona, the Irish Peat/turf development board, and I was asked to write a remembrance of those times for their pensioners' magazine. Thanks to his job I was able as a kid to travel over most of Ireland to deliver equipment and spares from their central stores, now the HQ, in Newbridge, Co. Kildare, to the various 'Works' in every bog in Ireland.)

“No matter where your traveling takes you,
Sure the bog will never leave you,
Where the heather and the moss grows,
And the turf lies row after row,
No matter what the weather
I’m a Bogman
Deep down, it’s where I come from."

I wish I had penned those lines, but they belong to a fellow Kildare and Newbridge man, Barry Moore, aka Luka Bloom. I knew Barry when he a young teenager, and earlier this summer met him again playing at the Knitting Factory in Hollywood, Ca. But that story is for another time.

I am now lucky enough to reside in a small seaside town called Del Mar, in southern California near the Mexican border with Tijuana. The town’s motto is “Where the Turf meets the Surf”, a reference to the Del Mar racetrack, where you can see the waves and the surfers from the grandstand. Bing Crosby helped get it started, along with actor Pat O’ Brien, and I remember him as a kid being a regular feature at the Curragh on Derby day. Before I landed in sunny California, I spent almost twenty years in Jamaica, living in Kingston, the capital. Every day we went walking or jogging around the local reservoir or the campus of the University, both referred to as Mona Dam and Mona campus. The main road from Kingston to Montego Bay is through Bog Walk, So no matter where I wander, the turf and Mona and the bog has never been too far away.

I wish I could say that in my travels I have visited places named Lullymore, Ballivor, Cul Na Gun, Timahoe, Glenties, Attymon, Littleton, Derrygreenagh, Clonsast, Boora: but no such luck. Closest call was when I visited San Clemente up the road, Richard Nixon’s Western White House, and saw a picture of his favorite dog, an Irish red setter named King Timahoe, after his Quaker ancestors’ birthplace. I knew these places like the back of my hand as a kid, as daddy, Bob or Bertie, depending on who you talked to…drove his big Leyland lorry, LYI-784, to all these BNM ‘works’ and many more besides. During the summer months, he would pick me up several times a week, as we lived on the Milltown road, and most times he stopped for his sandwiches and to fill his Billy can. If he had a helper on board, I happily straddled the big engine cowling, riding it like some mechanical bull. The trick was not to fall asleep on the way home after a long day, as the windscreen seemed awfully big and close. More than once I was yanked from my slumbers by daddy’s arm, as he braked suddenly for some cow or ass crossing the road. In these times of child abductions, I still marvel at the thought that many’s the time I was dropped off a mile of so from the works, hail, rain, or shine, as the manager was ‘dodgy’, ie. Willing to enforce the company rules about not allowing non –employees to ride in the cab. Years later when I too was a manager and this became an issue I would always turn a blind eye…

The best adventures by far were at the height of the summer, when the harvesting of the peat was in full swing 24/7, and a breakdown on a bagger, ditcher, or harvester that could not be fixed cost thousands of pounds. Then, often in the middle of the night, the night watchman in Central Stores would ride out to our home on his bike, tell dad to saddle up, and within the hour he would be back with the van and the replacement parts. All three of us (Nora, Michael, and myself) would pile in for this magical mystery tour at what seemed like breakneck speeds across the bog of Allen, and the bumpy road between Rathangan and Edenderry was our introduction to rollercoasters later on. We never had an accident, due in no small part to the many Decades of the Rosary that were said going and coming.

Eventually I followed Nora and “Jim” and went to work for the board. Between us and the Crowes we were almost the majority in central stores. Nepotism had not yet been invented. I did a stint in the lab, and then up the top yard, stacking ‘sleepers’ and sorting steel with the iron king, John St. John. Jack Breen, the stores manager ,was as good as any college professor I ever knew, and Peter Cawley made sure I was not given any breaks on account of my last name. Frank Kiely the accountant was dad’s longtime and best friend, but pretended he hardly knew who I was. Vinny Rooney taught me how to hold a tea cup properly, except that in my case it was a mug. But the man who had the most influence on me was ‘Noddy:’ Neil O ‘Donnell, the manager. As a result of Neil, I grew up wanting not to be a truck driver, but a manager, and for most of my adult working life that is what I have done.

But I am proud to be a truck driver’s son, and a Bogman, and a graduate of BNM University, because “deep down it’s where I come from .”

Here's a video of the Luka Bloom song I referenced, made all the more poignant having know Barry Moore as a young man:

Came across this before but moved on without commenting on it.  In times gone by I would have known of your knowledge of Christy and Barry since you moved to Newbridge.  Had a listen to "I'm a Bogman".