Intoxicated with unbridled madness, a dreamer returned from a pilgrimage, a sojurn, high in the Mourne Mountains of County Down. Back to reality, back to his brother and their bicycle shop. Back to his small, unremarkable village in the valley. This dreamer had made the pilgrimage many times before. Had basked in the ever-present silence, gave his thoughts free rein, let them soar. The crisp bracken snapping underfoot, the fresh wind buffeting his face, invigorated and filled him with optimistic fervor. He felt as one with the mountains, the sky and the cosmos. But this time something was different. He was different. He had changed. Giddy and lightheaded he wondered, just for an instant, am I going mad?

Strolling through the ‘silent valley,’ he rested near a patch of gorse, their yellow blooms vibrant in the afternoon sun. He turned his eyes upward and scanned the cloudless sky. Marveled as two hawks wheeled and circled high above him, wide-spread wings in silhouette against the sharp blueness. If only I could do that, he mused. 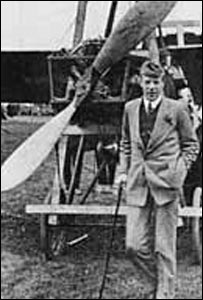 On down, down through a thick carpet of heather, in the distance, the small lime-washed cottage. A row of new bicycles lined up outside the shop. Watched the sunlight glinting off the frames. Watched his brother, leaning over the stone bridge, gazing at the flowing stream beneath.

I wonder what he’s thinking?

The dreamer’s mind took him on a fantastical flight of fancy. Transported him to a far-off land, a land across the wild, grey Atlantic Ocean. Thought of two other brothers and a place called Kitty Hawk. And in that moment, right then, right there, the dreamer knew he had to fly.

Henry George "Harry" Ferguson was born at Growell, near Dromore, in County Down, Ireland the son of a farmer of Scottish descent on 4 November 1884. In the early 1900s the young Harry Ferguson became fascinated with the newly emerging technology of powered human flight and particularly with the exploits of the Wright brothers, the American aviation pioneers who made the first plane flight in 1903 in North Carolina, USA. He also admired the first person to accomplish powered flight in the UK, Alliot Verdon Roe who in June 1908 also flew an aeroplane of his own design. As powered flight had not yet been achieved in Ireland, Ferguson began to develop a keen interest in the mechanics of flying and traveled to several air shows, including exhibitions in 1909 at Blackpool and Rheims where he took notes of the design of early aircraft. Harry convinced his brother that they should attempt to build an aircraft at their Belfast workshop and working from Harry's notes, they worked on the design of a plane, the Ferguson monoplane. After making many changes and improvements, they transported their new aircraft by towing it behind a car through the streets of Belfast up to Hillsborough Park to make their first attempt at flight. They were at first thwarted by propeller trouble but continued to make technical alterations to the plane. After a delay of nearly a week caused by bad weather, the Ferguson monoplane finally took off from Hillsborough on 31 December 1909. Harry Ferguson became the first Irishman to fly and the first Irishman to build and fly his own aeroplane.

After falling out with his brother over the safety and future of aviation Ferguson decided to go it alone, and in 1911 founded a company selling Maxwell, Star and Vauxhall cars and Overtime Tractors. He saw at first hand the weakness of having tractor and plough as separate articulated units, and in 1917 he devised a plough that could be rigidly attached to a Model T Ford car—the Eros, which became a limited success, competing with the Model F Fordson. In 1917 Ferguson met Charles E. Sorensen while Sorensen was in England scouting production sites for the Fordson tractor. They discussed methods of hitching the implement to the tractor to make them a unit (as opposed to towing the implement like a trailer). In 1920 and 1921 Ferguson demonstrated early versions of his three-point linkage on Fordsons at Cork and at Dearborn. Ferguson and Henry Ford discussed putting the Ferguson system of hitch and implements onto Fordson tractors at the factory, but no deal was struck. At the time the hitch was mechanical. Ferguson and his team of longtime colleagues, including Willie Sands and Archie Greer, soon developed a hydraulic version, which was patented in 1926. After one or two false starts, Ferguson eventually founded the Ferguson-Sherman Inc., with Eber and George Sherman.

The new enterprise manufactured the Ferguson plough incorporating the patented "Duplex" hitch system mainly intended for the Fordson "F" tractor. Following several more years of development, Ferguson's new hydraulic version of the three-point linkage was first seen on his prototype Ferguson "Black", now in the Science Museum, Kensington, London. A production version of the "Black" was introduced in May 1936, made at one of the David Brown factories in Huddersfield, Yorkshire, and designated Ferguson Model A tractor. In 1938, Ferguson's interests were merged with those of David Brown junior to create the Ferguson-Brown Company.In October 1938, Ferguson demonstrated his latest tractor to Henry Ford at Dearborn, and they made the famous "handshake agreement". Ferguson took with him his latest patents covering future improvements to the Ferguson tractor and it is these that led to the Ford-Ferguson 9N introduced to the world on 29 June 1939. The 1938 agreement intended that the Ferguson tractor should also be made in the UK at the Ford Ltd factory at Dagenham, Essex but Ford did not have full control at Dagenham and, while Ford Ltd did import US-made 9N/2Ns, Dagenham did not make any.

Henry Ford II, Ford's grandson, ended the handshake deal on 30 June 1947, following unsuccessful negotiations with Ferguson, but continued to produce a tractor, the 8N, incorporating Ferguson's inventions, the patents on almost all of which had not yet expired, and Ferguson was left without a tractor to sell in North America. Ferguson's reaction was a lawsuit demanding compensation for damage to his business and for Ford's illegal use of his designs. The case was settled out of court in April 1952 for just over $9 million. The court case cost him about half of that and a great deal of stress and ill health. By 1952, most of the important Ferguson patents had expired, and this allowed Henry Ford II to claim that the case had not restricted Ford's activities too much. It follows that all the world's other tractor manufacturers could also use Ferguson's inventions, which they duly did. A year later Ferguson merged with Massey Harris to become Massey-Harris-Ferguson Co, later Massey Ferguson.

Ferguson died at his home at Stow-on-the-Wold in 1960, the result of a barbiturate overdose; the inquest was unable to conclude whether this had been accidental or not.

Thanks for the reminder!!!