Hugo O’Conor, Roscommon born & Dublin raised, was the Governor of Texas in 1767. Under his watch, San Antonio was built up and fortified to withstand the attacks launched by the Apache.

James Hewetson, of Thomastown, Co KIlkenny, and James Power, of Ballygarrett, Co Wexford, along with John McMullen and James McGloin, of Castlegal, Co Sligo, were the first Irishmen to receive empresario contracts from Mexico. They traveled to New York to recruit countrymen and their families as they landed in America. They settled the areas now comprising Refugio and San Patricio counties. James Powers went one step further, returning to his own village to recruit families.

James Power used his influence to seat Sam Houston at the Convention of 1836. Eleven Irishmen died at the battle of the Alamo and fourteen were among those with James W. Fannin, Jr., at the Goliad Massacre. Appropriately, Refugio and San Patricio counties were among the first established in Texas after the revolution; the date was March 17, 1836, Saint Patrick's Day.

On the Goliad Declaration of Independence, you will find the signatures of twenty-seven Irishmen:

On the Texas Declaration of Independence, you will find that four of the signatures were Irish:

After the Civil war, many Irish men came to Texas to work on the building of the Southern Pacific rail line, which was the second transcontinental rail link. They also came to establish themselves as storekeepers, farmers, ranchers and cowhands. 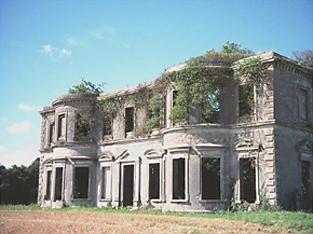 In the canyons and grasslands of Palo Duro, southeast of Amarillo, Texas, you will find the JA Ranch. The JA was established by John George Adair, of Queens County (today, Co Laois), and Charles Goodnight. It is still in operation today. It is the oldest privately owned cattle ranch in the Palo Duro area of the Texas Panhandle and is on the National Historic Register.

I was one of two photographers selected to photographs his residence, Belgrove House, outside of Ballybrittas, Co Laois, for an exhibit at the Panhandle Plains museum in 2006. In the area where the ruin of his home still stands, he is spoken of in hushed tones and you almost expect him to walk through the door. He was a tyrant and it is said that a great Party was held by all his tenants when he left for America. In 1885, upon his death, in ST Louis, Missouri, his body was brought back to Ireland and interred in Lea Church, Killenard, Co Laois, near Belgrove house. The locals will tell you that the night before he was buried a dead dog was thrown into his open grave by disgruntled locals. In Glenveagh, his wife had the face of a large rock inscribed with his name and the inscription "Brave, Just and Generous". However, lightning in a thunderstorm broke the rock into many pieces which fell into a nearby lake. Two years after his death, Adair's Belgrove House, also a very large, country mansion was reduced to ruins in a fire, and remains in that state, called locally the burnt house. The Irish contribution in Texas wasn’t just as laborers and soldiers. Harry McArdle, Belfast born, was an artist who painted the murals that depicted the battles at San Jacinto and the Alamo, which still hang in the Capitol building. He also painted Portraits of Jefferson Davis and Sam Houston.

As they did everywhere that they settled, the Irish also brought with them their music. The songs that we associate with Texas, the most well-known being “The Streets of Laredo” were adaptations of Irish & Scottish songs. “Down in the Valley” was an adaptation of “Connemara Cradle”. The Scottish whaling ballad, 'Fareweel tae Tarwathie’, became The Railroad Corral. In many songs, the only thing remaining of the original songs is the melody.

The North Texas Irish Festival is now in its 32nd year. The Austin Celtic Festival, in its 17th year, is a who’s who of Celtic musicians.In the spirit of those adaptations, one of my performance partners and I adapted “Jamie Raeburn” a Scottish Ballad about a Baker who was transported to the Colonies in Australia for petty theft. We went with the premise that his ship was blown off course and arrived in Texas instead and “Texas Jamie” was born.

Irish-born Texans of note in the nineteenth century included:

William Kennedy - author of "The Rise, Progress and Prospects of Texas" (1841) encouraging immigration to the new republic

Richard W. Dowling - leader of the company of all-Irish Confederates who repulsed the Union fleet at Sabine Pass

Today, you will find a strong Irish influence across the width and breadth of Texas. There are numerous organizations which serve to preserve and protect the unique Irish heritage of Texas. They are as diverse in nature as the Irish who make up their membership. There is a Texas Irish Cycling team, now in its Eighth year. The Harp & Shamrock Society has been in existence since 1966. The Celtic Cultural Center of Texas, created in 2002, is still focused on bringing to fruition a brick & mortar facility in Austin. In the meantime, they are event centered, responsible for the Annual ST. Patrick’s festival, the Celtic Christmas at St Mary’s Cathedral, amongst a host of other great events throughout Austin.

I have always said, with the many Irish and Celtic folk that populate Texas, it could just as easily have been the “Lone Shamrock” state. 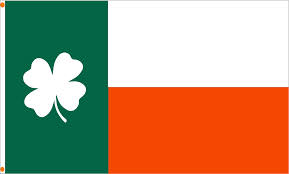 Excellent summary - you packed a whole history into this short article, which could easily become book length!   As you rightly point out, most studies of the Irish diaspora in the US focus on the northeastern states, and the minority of books that look at Irish influence in the development of the South tend to gloss over developments in Texas.   A very useful source is Davin T. Gleeson's book 'The Irish in the South 1815-1877' (University of North Carolina Press, 2001), but I found Kieran Quinlan's book the most amazing read, putting so much into context: 'Strange kin: Ireland and the American South' (Louisiana State University Press, 2005).   Putting the Civil War era aside, and those books which deal with Texas during that time, those books which deal with Texas history, that is, the colonisation of Texas by European immigrants, all tend to cover the Irish contribution as a mere aside.   At least, that was what I found when researching my most recent book 'Dick Dowling: Galway's hero of Confederate Texas' (Old Forge Books, 2013) - shameless plug here!   Perhaps it is now time for someone (Bit Devine?!) to produce a history of the Irish contribution to the development of Texas . . . !

Just read today that Texas immigrant Sam Houston converted to Catholicism in order to secure land rights in Mexico's then province of Texas. After importuning by a later wife, he converted to the Baptist faith, I presume, when Texas was 'independent.' HAPPY INDEPENDENCE DAY TO ALL YOU IRISH TEXANS!

The Texas Declaration of Independence was the formal declaration of independence of the Republic of Texas from Mexico in the Texas Revolution. It was adopted at the Convention of 1836 at Washington-on-the-Brazos on March 2, 1836, and formally signed the following day after errors were noted in the text.

In October 1835, settlers in Mexican Texas launched the Texas Revolution. However, within Austin, many struggled with understanding what was the ultimate goal of the Revolution. Some believed that the goal should be total independence from Mexico, while others sought the reimplementation of the Mexican Constitution of 1824 (which offered greater freedoms than the centralist government declared in Mexico the prior year). To settle the issue, a convention was called for March 1836.

This convention differed from the previous Texas councils of 1832, 1833, and the 1835 Consultation. Many of the delegates to the 1836 convention were young men who had only recently arrived in Texas, although many of them had participated in one of the battles in 1835. Most of the delegates were members of the War Party and were adamant that Texas must declare its independence from Mexico. Forty-one delegates arrived in Washington-on-the-Brazos on February 28.

The convention was convened on March 1 with Richard Ellis as president. The delegates selected a committee of five to draft a declaration of independence; the committee was led by George Childress and also included Edward Conrad, James Gaines, Bailey Hardeman, and Collin McKinney. The committee submitted its draft within a mere 24 hours, leading historians to speculate that Childress had written much of it before his arrival at the Convention.

The declaration was approved on March 2 with no debate. Based primarily on the writings of John Locke and Thomas Jefferson, the declaration proclaimed that the Mexican government "ceased to protect the lives, liberty, and property of the people, from whom its legitimate powers are derived" and complained about "arbitrary acts of oppression and tyranny". The declaration officially established the Republic of Texas.

Among others, the declaration mentions the following reasons for the separation:

The 1824 Constitution of Mexico establishing a federal republic had been usurped and changed into a centralist military dictatorship by Gen. Antonio López de Santa Anna.
The Mexican government had invited settlers to Texas and promised them constitutional liberty and republican government, but then reneged on these guarantees.

Texas was in union with the Mexican state of Coahuila as Coahuila y Tejas, with the capital in distant Saltillo, and thus the affairs of Texas were decided at a great distance from the province and in the Spanish language.

Political rights to which the settlers had previously been accustomed, such as the right to keep and bear arms and the right to trial by jury, were denied.

No system of public education had been established.

The settlers were not allowed freedom of religion.

Based upon the United States Declaration of Independence, the Texas Declaration also contains many memorable expressions of American political principles:

"The right of trial by jury, that palladium of civil liberty, and only safe guarantee for the life, liberty, and property of the citizen."

"Our arms ... are essential to our defence, the rightful property of freemen, and formidable only to tyrannical governments."