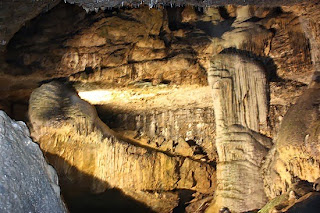 History and geology blend at Dunmore Cave to give an interesting and unique situation. Consisting of a series of chambers formed over millions of years, the cave contains some of the finest calcite formations found in any Irish cave. The case has been known to man for many centuries and is first mentions in the 9th century Irish Triads. The most interesting reference however, comes from the Annals which tells of a Viking massacre at the cave in the year 928 AD. Archaeological finds within the cave confirm Viking activity. Exhibitions and displays in the Visitor Center. The cave is inaccesible to wheelchair users.